Even as Gandalf and Pippin ran forward, they heard from within the house of the dead the voice of Denethor crying : ‘Haste, haste! Do as I have bidden! Slay me this renegade! Or must I do so myself?’ Thereupon the door which Beregond held shut with his left hand was wrenched open, and there behind him stood the Lord of the City, tall and fell; a light like flame was in his eyes, and he held a drawn sword.

Denethor, Steward of Gondor and Lord of the City.

This model is of course a likeness of John Noble as Denethor, Steward of Gondor. Sculpted by one of the Perrys from memory, this figure was released shortly after Return of the King was released, and is now sadly discontinued. It’s quite a good likeness, especially given the truescale nature of the model.

As Denethor is a rather understated model despite being fairly important in the story of LotR, I wanted to make him stand out in some way – even if he’s far from a must-have combat machine like his sons. I attempted to do so by mounting him on a back-to-base-ix resin base to raise his stature a little above the rank and file of Gondor. I painted the base as stained white stone – perhaps some of the ruins of Osgilliath? A little bit of ivy and a couple of tufts add the little colour to what is otherwise a very monochromatic model.

Denethor. On his way to the loo.

I started painting Denethor sometime years ago, but never really got far beyond the black. Last year, I started working on him and got his cloak to a point where I was quite happy with it. I then gave it a black wash to bring it back down and unify it, which just fucking wrecked the whole thing. You know when you hear about people having a bad mistake happen to a model and then throwing it in the bin? That kind of thing. More recently, I worked on him a little again, this time stalling out due to still being frustrated by the wash wrecking it last time, but it’s been sitting on my painting desk, and is one of the models I had specifically in mind when starting this challenge. Given the month that it’s been, I decided to work on Denethor this last weekend so I’d have something “legal” finished for the painting challenge in the Gondor category..

Denethor, gliding across the battlefield.

I’ve tried to replicate Howe’s 5 o’clock shadow and also distinguish the shades of black/grey/white between his cloak, the fur lining and his hair. Howe can look quite pale and gaunt in colour in some stills from the film, though in others his face is much closer to normal. I tried replicating that, but I felt that he was already monochrome enough, so I added a subtle amount of colour back into his face. 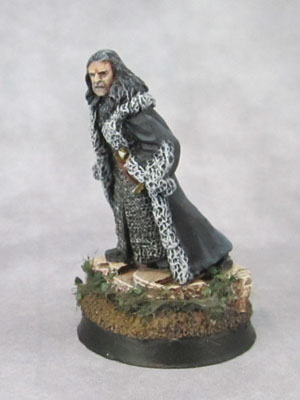 Aside from obvious scenario-based uses in LotR games, Denethor can also make an appearance with my Army of Gondor on the Kings of War battlefield. Possibly as a “Wizard”, where the Fireball spell could represent Denethor directing artillery fire onto his chosen target, Bane-Chant representing his oratory driving his troops to greater valour on the field of battle, and so forth…