Just as with the dwarves I’ve slowly been cranking out, I’ve been trying to keep a few old-school goblinoids on my painting plate. I’ve tended to choose them based on the criteria of how easy they look like they would be to get painted, so simple clothing and/or lots of armour drives them to the top of the list when I browse my box of metal greenskins.

The orc on our left is one from that crossover period between WHFB2nd and 3rd editions. A Kev Adams sculpt with the fetching identifier of “Orcs with Dual Weapons 05”. Despite his rather awkward posing, it’s a decent model. I used some ochre brown in the skin mix of the two orcs here in an attempt to start varying the skin tones of these guys a bit. While it (obviously) adds more yellow to the overall look, I’m hopeful that it’s not too garish. I’ve opted to use a metal Foundry Viking shield instead of a plastic, though I’ve kept the design to simply block colour.

Speaking of garish… the Goblin is from the C12 range circa the mid-late 1980’s, though I’m not sure of the exact year as the catalogues are spotty from that era.the cast I have here is pretty rough, so it was a matter of doing the best I could within a reasonable amount of effort for a tiny model. It’s a Kev sculpt, but predates his “signature” goblin look, with smaller, tighter facial features and an integral shield rather than a boss for plastic ones. He actually sat in a case half-painted for many years before I noticed him recently and decided to get him done. Which also took awhile… 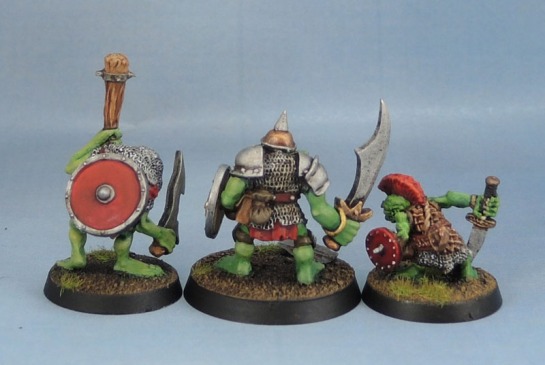 The central model on the 32mm base is the newest of this trio – a 4th Edition Orc listed in the Black Catalogue 4 (1994 filled with 1993 models) as “Orc with Sword 3”, though he’s a bit bigger in stature than his fellow, “Orc with Sword 3” painted awhile ago which is what led to me mounting him onto the larger base. He’s not as big as the actual Big’Uns, but he’s not far off.

…which kind of leads to my question for you, dear reader. While I’ve been working casually on these Fantasy Orcs, With the promise of 8th Edition looming, I’ve also been eyeing off my old-school RT Orks and the more recent 40k Brian Nelson Orcs that I started working on in 2005. (OK, recent is relative). The 40k plastics I mentioned, being larger certainly overhang their 32mm bases, though the “official” size remains 25mm. I feel that they’ll look better on the 32mm bases, just as their classic counterparts, Space Marines do. I’m not yet convinced either way on which way to go – the better aesthetic choice? The “official” choice? Wait and see what conventions on basing that 8th brings on release? At this stage it would not involve a terribly large amount of rebasing. Any thoughts?

8 thoughts on “A Trio of Classic Kev Adams Citadel Greenskins”