Yet another WarZone model today. This one is a 2nd-generation Cybertronic Chasseur resculpt that came out towards the end of 1st edition. The original Cybertronic Chasseurs tended to be bare-chested or singlet-clad bald guys with guns. They were also one of the better-looking factions in terms of models back then (to my eye, at least) and as one of the gaming group of the day elected to run a campaign, and Imperials were already taken (by two other players – who used different aspects of the Imperials – Berets and Trenchers from memory) I went with the Cyber-boys. As they were generally half naked, muscular dudes, and we were in the midst of the nWo era of wrestling at the time (leading into the “Attitude Era”) my Cybertronic (and other) guys ended up with some wrestling influence.

As I had a bunch of the original Chasseurs that I was already using as my Chasseurs when these new Chasseurs came out, I decided to use the new Chasseurs as Chasseur Sergeants. This model being the only one of these that got even this far painted. Then again, I don’t recall my army composition from 20-whatever years ago when this all happened, so… 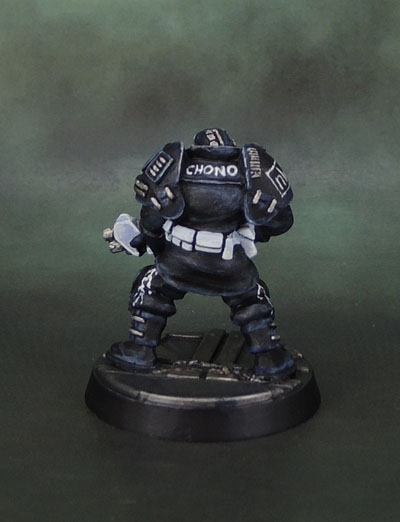 In any case, I followed the nWo theme, and this model was named “Chono” in honour of Masahiro Chono, a wrestler from New Japan who was a leader of the nWo Japan chapter of the nWo. The model’s pants have the lighting bolts on them in homage to Chono. 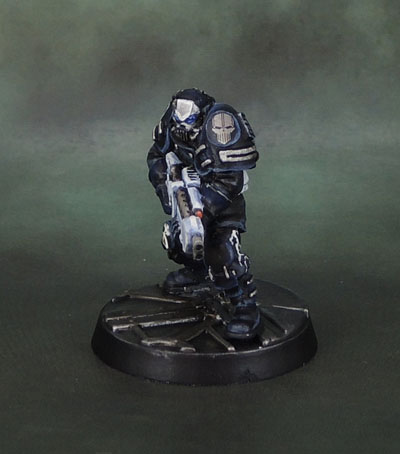 As part of my upgrade and update, I’ve added an Iron Warriors icon to his shoulder pauldron, and also marked out the skull on his helmet in a more obvious manner (it was originally black). I also gave him an industrial base to further tie him in with my Iron Warriors and changed his eye lenses from their original red to the cold blue that my IW use. He’ll either be a Traitor Legion Astartes in a stealth-type squad, or a cultist leader. Once again, these models are still available from Prince August. (and nope, I’m not getting any kickbacks for all these plugs – I wish!)