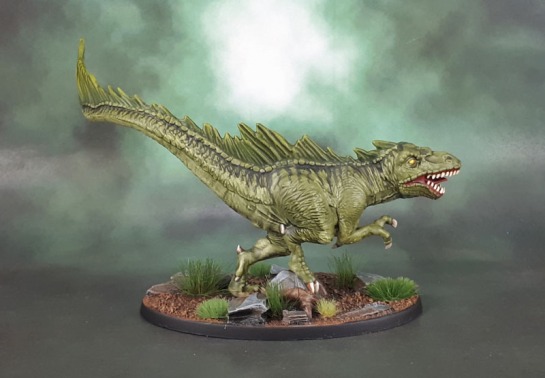 Another model from my big shipper box of Shadows of Brimstone sprues today. It’s the Swamp Raptor of Jargono!

Like pretty much all of the Brimstone Models I’ve worked with to this point, it’s a pretty simple model, all in all – though not a bad one.

The Swamp Raptor box doesn’t come with an included Barbarian Bikini Babe. At least to my knowledge. I’m pretty sure she’s not even a playable character, NPC or even enemy type in the game, so I dunno what Flying Frog were thinking there? 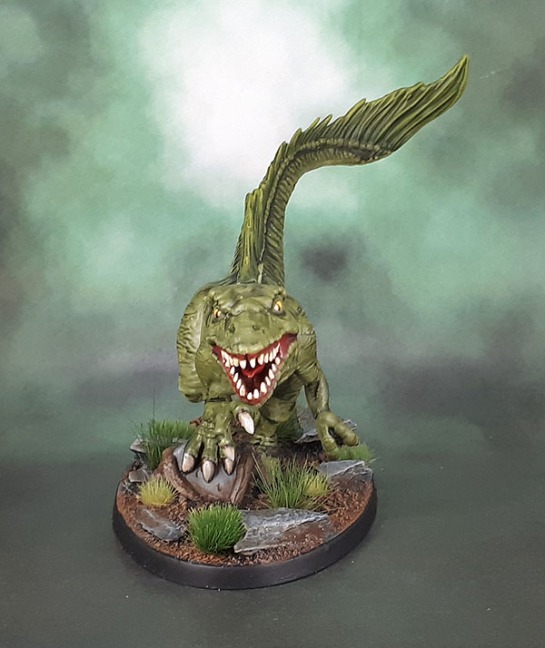 Given that the model is supposed to be a Swamp Raptor, I also ignored the colourful rendition on the box art and went instead for a darker green look. Trying to straddle that line between overly-realistic dullness and bright enough to be interesting tabletop miniature. I also swapped out the pitifully small, round Flying Frog base for a larger oval that fits the model much more nicelty, while allowing some space for rocks and some foliage.

To this end, I incorporated some striping, though the washes, highlighting and shading makes the striping blend in much more than originally envisioned.

The tonal variation on the teeth is there, they just didn’t come out in the photograph. You can kinda see it in the claws at least, though again, nicer in real life. I really need to get better at photography, though it’s a little trickier with larger models like this – and of course, what looks fine onscreen can look less fine on the PC, later.

I added some yellow to the dorsal crest and the tail. Again, trying to straddle that like between ambush predator and way too colourful. A yellow glaze and some yellow into the green highlights brightened the crest up a little without going fully neon. 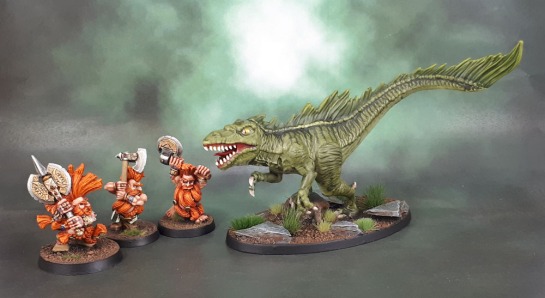 31 thoughts on “Shadows of Brimstone: Swamp Raptor of Jargono”