I’ve had this particular metal model for quite a few years. Picked up amongst a baggie of second-hand plastic dwarf models back in the day, it’s a slightly confounding model that I’ve never quite been able to place. On the surface it looks like any other Citadel Dwarf Slayer, right? Thge thing is, it’s base tab was blank. Doesn’t mean all that much by itself, though most of us from the metal age would know how that’s quite unusual to not even see a “GW1995” or whatever on the tab. Oh, and I haven’t been able to place him in any of the series of Slayer models that I’ve looked at. 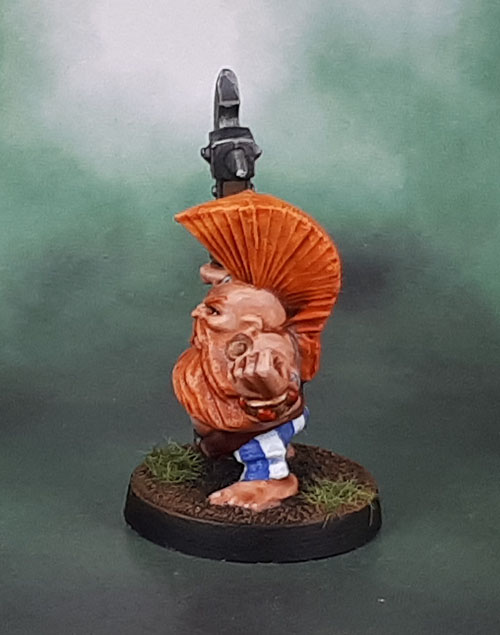 The side view is where it’s much more interesting. Look at the details of the mohawk and also the earring. That’s not usual sculpted hair. It looks to me like the model was made for a much simpler 2-part mold as the whole thing has been designed to remove the undercuts that you get with a silicone mold. Maybe a hard mould? Is the model a prototype of some sort? A recast? Metal recast of a plastic model? (of this quality? Seems an …odd choice) Or from one of the many third parties that make not-models of various types for not-Warhammer?

If you know from whence this model came, dear reader, please do let me know in the comments. It’d be good to put a final lid on this model. He took this long to finish painting for a reason, and it’s because the odd (lack of) details on him were rather uninspiring, so thanks to “The Tray” for being the thing to finally motivate me to get him done and out of here!

24 thoughts on “A Mystery Dwarf Slayer…”