Despite my lack of blog updates recently, I’ve still been painting on a reasonably regular schedule. Just the process of photographing and writing about the models hasn’t really appealed to me lately. You know how it goes – many of us are hot and cold at different times. These models for my Mentor Legion force were all completed in January and just hadn’t been photographed until last weekend, and so I’m writing about them now. As with all my stuff painted in January (which is when these guys were finished) these models go toward my tally for Dave Stone’s Paint What You Got Challenge. In this case, they very much fit the theme of Dave’s challenge! 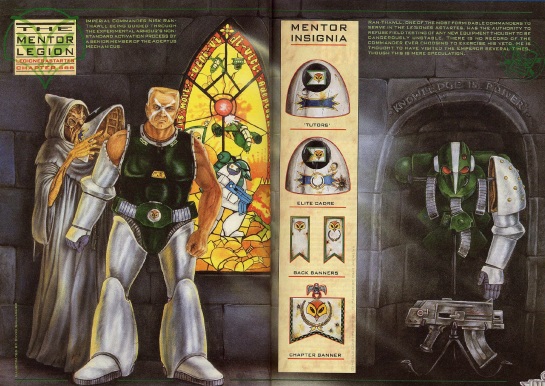 The Mentor Legion of course, date back to White Dwarf 98, in February of 1988. The second of all chapters to recieve a Chapter Approved article with their own bespoke rules – after only the Ultramarines in their infamous article where Marneus Calgar on throne was introduced. (Another model I’ve had for decades and need to paint one day before I die!) 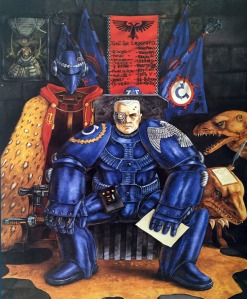 Anyway, these models have been sitting half-assembled and half-painted for literally decades now. Back before “New Edition, New Army” became a marketing phrase used by GW, it was actually a thing that many hobbists did. I mean, it’s never taken many of us much of an excuse to start a new force, and so when 40k 3rd edition was released in 1998, I decided to start a Mentor Legion force. While I did get close to finishing a few of the models, particularly my first understrength Tactical Squad of 6, a Jump Librarian and the Scouts, I never did due to my chapter badge OCD kicking in. I mean, I’m happy and comfortable freehanding all kinds of things, but when it comes to things that need to be perfectly uniform across multiple models, I much prefer decals or even sculpted detail. 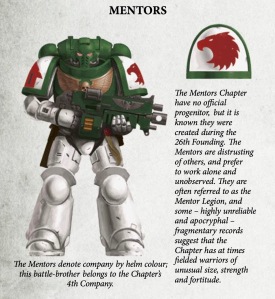 My first attempt at making custom decals turned out badly when the sealant made them all run (despite following the instructions) and then after my regular play days came to an end, the army just sat in a series of model cases. Even though at some stage since the original days, GW has simplified the Mentor Legion into the “Mentors” – complete with a much simpler chapter icon and reconned lore, Homey Don’t Play That Shit. I was going to keep my Mentor Legion as the fucking Mentor Legion, complete with the Chapter Icon that had always appealed to me since I first saw it in that old WD magazine. A couple of years ago, with an inkjet printer, I finally decided to give it another go with success. I also found a nice gentleman on Shapeways who was willing to custom make me the original Mentor Legion icons for shoulders and flat surfaces. 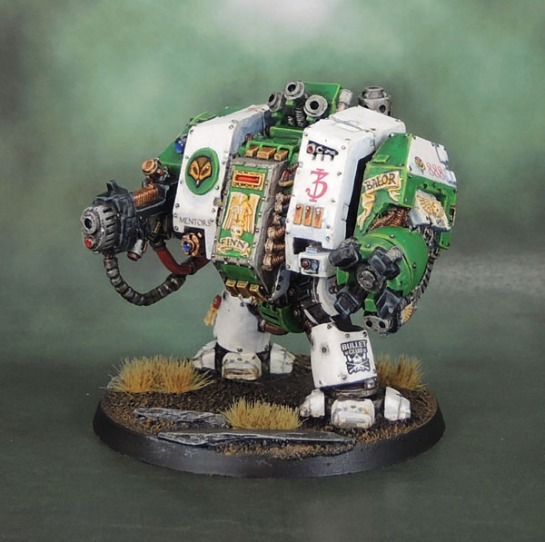 With that, I was off and …not quite running. I got the figures who were all-but-complete finished. New 32mm bases, a bit of touchup on the worn bits and the addition of the icons was pretty much all they needed. I actually got started by finally finishing that 2nd Edition metal dreadnought I’d converted with a plasma cannon (I was going Plasma-heavy as a theme before the Dark Angels were given that as their thing.)

The rest of the model that needed a lot more work just sat on a shelf on the Detolf. Not quite tucked out of sight, but in a kind of limbo where they were able to be ignored because they weren’t in my face but were visible enough pretty frequently. Kind of like that box of 3rd Edition Dark Eldar Scourges in the shelf under the stairs. 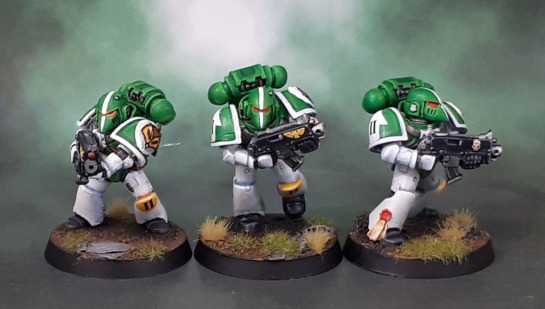 But! The Squad of Space Marines up top isn’t actually a Squad of Space Marines. Oh no, that would be way too simple. Aside from the fact that there’s a dozen of them up there, they’re actually models designed to fill out and (in one case, at least) complete a series of my squads. The first three models are all in MkVI “Corvus” armour. The idea at the time was for my Mentor Legion to be throwbacks with the original style of armour, but made with new models. This obviously meant some compromises would need to be taken. I could do the heads, torsos and legs, but shoulders and backpacks were more problematic, so I simply did them with the 3rd edition parts in the more modern (40k 1.5+) style. The original idea was to do the whole army using these parts (starting with Squad II – Tactical), but I very quickly found out that I didn’t have enough to go around, but more on that later….

At this point then, II squad has 8/10 Marines done. I just need to build and paint two additional standard trooper Marines to complete this unit.

III Squad (Tactical) was also started way back when – once I found I didn’t have enough MK VI Corvus “beakie” heads, I decided to suck it up and have a more “normal” looking marine army with a variety of armour variants mixed in. When going through the models I needed to finish, I found that I had more than enough models to finish this squad, which confused me a little at first until I figured out that a pair of figures amongst them must have been destined for Squad II (*Corvus) – so as I mentioned a little earlier, I went with anything having a corvus-style helmet to fill out that squad. In the end, though – neither of those models ended up in the final version of Squad III.

What I did in the end was add in the four, two images up – one running guy using Assault Marine legs, one guy using a Biker Torso – for an interesting helmet variation at the cost of removing the ability to turn his head, and another guy who was from the early version of giving marines access to special weapons – a GW metal recast of their plastic 3rd edition marines in metal, with a metal special weapon (melta, plasma, etc) and a plastic arm & backpack sprue. Obviously I just gave him a bolter in this case. Lastly, III Squad needed a heavy weapon, so I then had a choice of prying off a backpack and then finding a suitable low-slung weapon to fit with the bolter-style arms the models at my disposal had – or just building a new one to fit the squad. Which is what I did instead. Bionic Legs from Anvil Industry, added to a selected torso and (especially) head with a Forge World lascannon and power pack added to the marine backpack. I had to slice off one of the ball-exhausts to allow the lascannon to fit, but it still looks like it’s meant to be – one of those variant packs. Arms were a problem – the right arm is from the 2nd Edition hybrid marines, while the left arm is from the RTB01 box, with a modern shoulder pad added.

In the end, III Squad was finally completed! It’s a nice feeling after so long. Maybe if I can keep this up in 2021 my 3rd edition army will once again be playable in a modern sense? 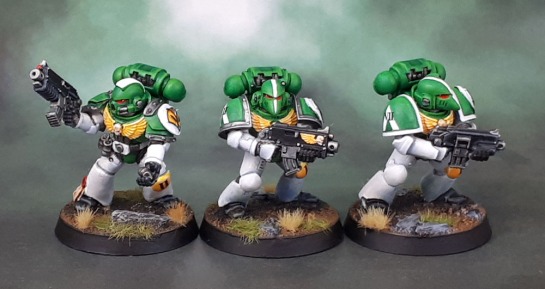 This all left me with 5 marines. Half of another Tactical Squad. Squad IV, as originally intended. However, this is 2021 – the age of Primaris and a lot more options than Tactical/Assault/Devastator/Scout/Terminator. It kinda felt like three Tactical Squads would be both overkill and just lead to even more time to get to something new and fun. So I split them. Three of the models were now assigned to Squad VII – but the squad would now be a Devastator Squad. So I gave the grenade-throwing marine some sligtly-fancier pauldrons (from Anvil, again) and nominated him as Corporal/Section/Combat Squad leader. The other two models assigned to VII being the two corvus-helmed models I was going to fill out Squad II with. Now I do need another 7 models for this Devastator Squad – a Sergeant, 2 line Marines and 4 Heavy Weapon specialists. That is a bit annoying to need to do before moving to something newer… 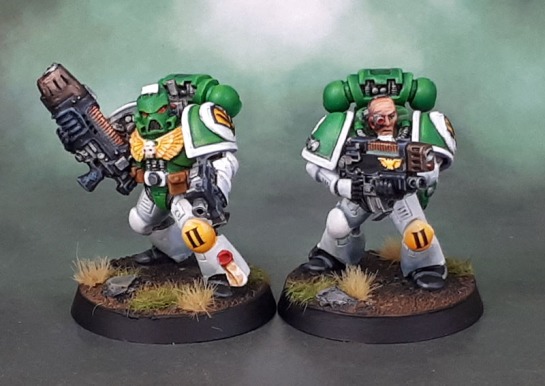 The last two marines left had to also go somewhere. I had this simple conversion based on the old Biker Marine Plasma Gunner. I’d done this kitbash before on a Dark Angel, and for the longest time I had both of them half-painted. Now I’ve finally completed them both. Yay!

The other, ugly-looking head-torso-model here is the original Master of the Ravenwing. I shit you not. The model was a 3rd edition Landspeeder with some metal add-on bits, one of which was this torso with attached uglyface. All of those metal bits have since long been superceded by plastic ones, and Sammael eventually got a name and a jetbike in either unweildy metal or terribad finecast. Double Yay! 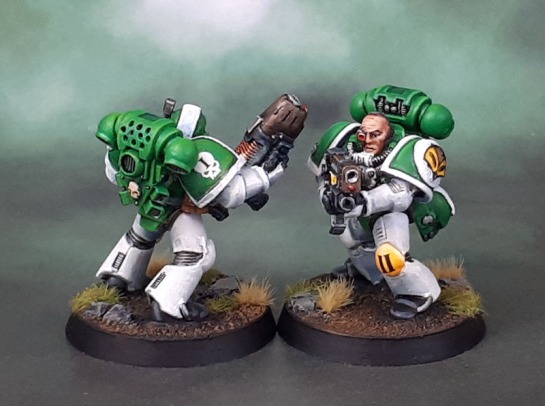 I… didn’t think much of him as a hero for the Dark Angels, and instead used him as a unique trooper. When I was working out where to put these things a couple of weeks ago, I decided to make a small Company Veteran Squad and give them Combi-Plasmas. This meant a counts-as for the guy who already had a Plasma Gun and Bolt Pistol, and giving not-Sammael a combi-plasma instead of the bolter he’d originally had destined. I still need at least one more model for a Company Veteran Squad, so I’ll get to that one a bit later as well. While I understand that Company veterans are just the old Space Marine Command Squad/Company Command Squad with all of the heroes like the Standard Bearer/Ancient and Apothecary stripped out, but I’m having weird overlapping questions with the Sternguard. Whatever. These guys can be a squad of three, so I’ll just give them a third at some stage and sort the rest out later. 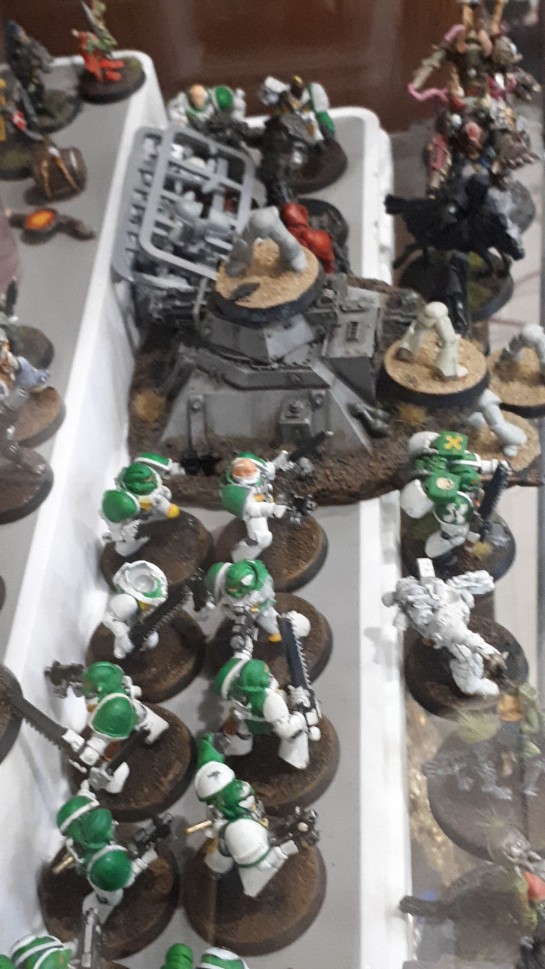 With that, I’ve finally gotten all of my half-assembled and half-painted tactical-style marines from this Mentor force completed. Sadly it turns out I still need to build and paint an additional 10 (at least) models to call these squads complete. Yes, it’s a wordy post, but it also serves as a repository for me to be able to easily check what I need to work on as I try to beat this army into a workable shape to actually use again.

And now, for any of you dear readers who have managed to wade through all of my ramblings I have a questionm to put to you – should I prioritise building and painting the 10 models needed to make the units in this post legal, or should I try to beat the two Assault Squads that have also been sitting around since 3rd into at least one playable unit?

(I did rebase them in January while doing the Tacticals)