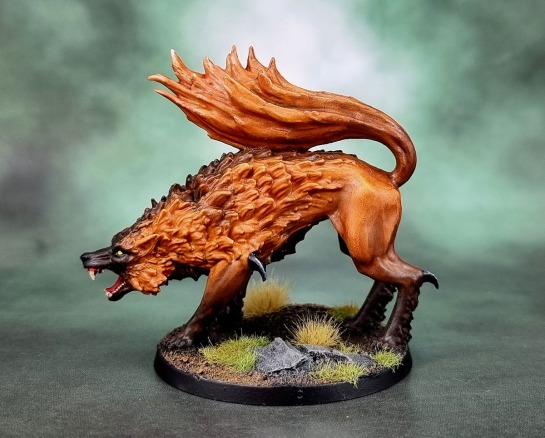 I’ve gotten the first of the three monstrous models in this set from the Mythic Battles: Pantheon box done this week for this year’s Monster March Painting Challenge being run by Swordmaster over at Path of an Outcast.

While googling for images of Foxes, I found several featuring some striking looking foxes with black and orange marnings rather than the typical orange and white.

While I didn’t copy them completely, as I felt there would have been too much black, they did influence how I painted the fox, giving it a slightly unique (and for me, interesting) look.

I have to say, I do with we had more fox-based models in the hobby rather than everything being based on wolves. I might just have to take matters into my own hands in future and paint some wolf models in more of a fox-like scheme when appropriate, especially when the wolves are on the smaller side as at this point I’ve got heaps of both giant and normal-sized painted wolf models. Once again, Chainsaw Girl Berkeley steps up to provide us with model scale (and another trophy for her wall, no doubt!)