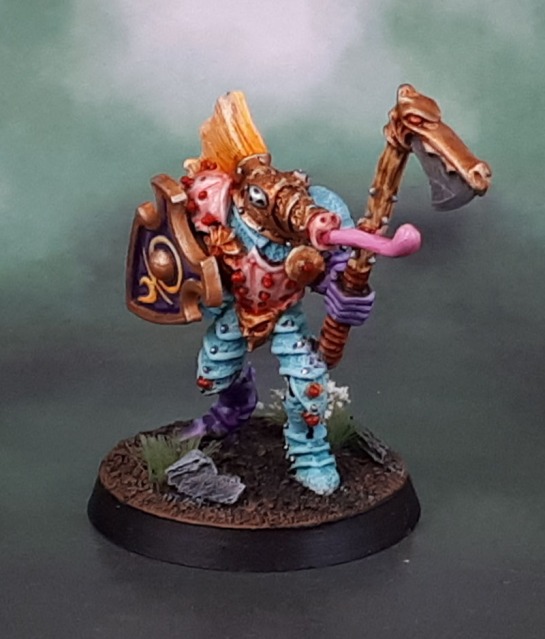 My next model for Ann’s “Paint the Crap You Already Own!” challenge is this Chaos Champion of Slaanesh from the Slaves to Darkness releases of 1988. This particular model has been sitting around, somewhat part-painted for …I dunno. 15? 20 years? A hell of a long time. When I say part-painted, I mean I’d done a rougher vesion of the turquoise armour, and based it on a 25mm square base with green railroad flock. 3 or 4 years ago when I was doing some of my other old, unfinished chaos models I fished it out of the figure case and it’s been sititng on a tray on my painting desk ever since, with no real sense of urgency to work on since I didn’t really like the figure. After completing the Dwarf the other week, I asked Marouda to choose three figures for me to work on completing next. She chose this figure, no doubt because the various shades of Aqua and Turquoise are “my favourite colour” as well as another two – both of which are still WIP and one of which led to a block of 5 being worked on sort-of-together. 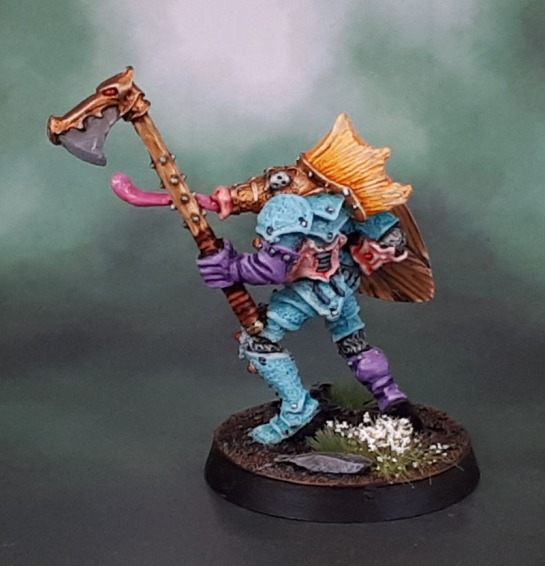 I kept the aqua-turquoise armour, and went with a brass for the helmet, which had sat, primed white since I could never figure out what to do with it. The bondage glove and sock went from the dark purple that they were basecoated in to something with much more pronouced highlights, and the crest stayed in the original yellow, but with more emphasis on the highlights and shading. The corset and right bracer had enough in common with the right pauldron in terms of sculpting that they all got the same treatement – pearlescent red (which you cannot see in the photos at all) with a subtle red wash. The other metal accoutrements also got given the same brassy treatment as the helmet, as did the metal furniture of the weapon. Red gemstones and that was mostly that. 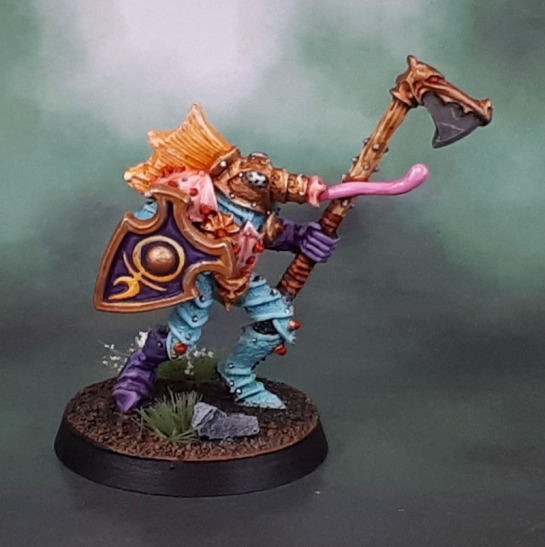 The shield, naturally had to be one of the original plastics from the era of the sculpt. I went with one of the smaller “chaos” shaped shields in the end, as the main issue I have with a lot of them is that they end up covering a lot of the hard work you put into these lovely classic sculpts. I followed the same overall palette that I used on the rest of the model, with a freehand rune of Slaanesh that looks a little reminiscent of a dancing humanoid figure, due to the angles. I also gave the crescent on the end a bit of a crab-claw shape, as a nod to the daemonettes. Gloss varnish on the steed’s tongue for a nice, extra-slick look.

So thanks to Marouda’s choice (which admittedly was greeted with “that one??”) I have another model in that camp I rather like adding to – models I pretty much disliked, didn’t want to paint, and now have a real fondness for as finished pieces. Yeah, I’m happy with this one.

The penultimate post for both this batch of Dwarven Slayers and my July models (Round-Ups aside). We today have the Dwarf Daemon Slayer, again from 1994, coinciding with the Warhammer Armies: Dwarfs release of 1994 for 4th edition WHFB. I’ve also painted this model before three years ago, but with a second one, what was I to do but put some time between them and get around to painting the second? I mean, if they were plastic, or even a lot less “closed”, I’d have probably tried to convert this second one, but hey, simply painting it will have to do!

Once again this model has sat on the desk for quite a long time. I mean, it’s been there since it’s twin was sat there alongside. And as I just checked to find. that was three years ago. Now off to join his painted brethren he goes…