Yep, that’s right – 1985! I’ve had this model myself since either the end of the 80’s or start of the 90’s, and actually started working on it in the 90’s – and finally completed about 2 weeks ago. This model is a great sculpt, but one I had a great deal of difficulty in getting done. The problem for me was in the outfit and also finding appropriate colours to paint it in – a…kilt/skirt, and a fur-lined vest accented by wrappings with embedded spikes. The difficulty in that skirt being just how many folds and tears and patches that it has across the whole thing, making it a bit of a nightmare if one wanted to add some kind of patterning to it while keeping the patterns consistent, while also trying to keep the “caster” look to the model, since I’ll be using it as an Ogre Mage in my rather dormant Kings of War Ogre force.

The Ogre Mage designation is also why I pinned him onto a small boulder makde from cork bark – as a model dating form the mid-1980’s, he’s quite small compared to any current Ogre models from almost any company – and especially so for a hero model. Looking at the model again while typing, I wonder if I should attempt go to back and add a very simple “Roddy Piper 1984” style “tartan”? Hm….

I gave him the glowy eyes using Nihilakh Oxide over white. A shame there’s no Contrast paints that really work well in the same way. The reds are WAY too pigment-strong, even watered down… I’m not 100% sure, but I think this might be the last of my old C23 Ogres that I needed to paint, well, to complete. My next ogres will be more recent models. Not that it will be hard to have more recent Ogres than this guy….

Today we have what might seem like a bit of a random model, it’s RPE’s Ice Troll, that I picked up some years ago and had cut off the integral metal base, rebased on a 40mm square for Kings of War, primed white and then promptly left on a shelf in a cupboard ever since. I picked up thsi model to add in with my C23 Chaos Ogre and Berserker Ogre, in that it could easily pass as a not-quite-right Ogre, that’s perhaps a little chaos-touched to use in my Kings of War Ogre force as one of the Berserker Ogre unit.

He’s a little squat, and his head, embedded in his chest in a weird way with weird horn/tusks protruding from the sides of his face, and the overall sculpt is very much a flat one-piece metal model of that 90’s-2000’s period – but it was a reaonably enjoyable and reasonably fast palette cleanser after spending the most part of the previous month painting Zombicide models with a few Last Chancers thrown in. The details and things like the musculature are technically well-sculpted, which is a positive aspect of the model. 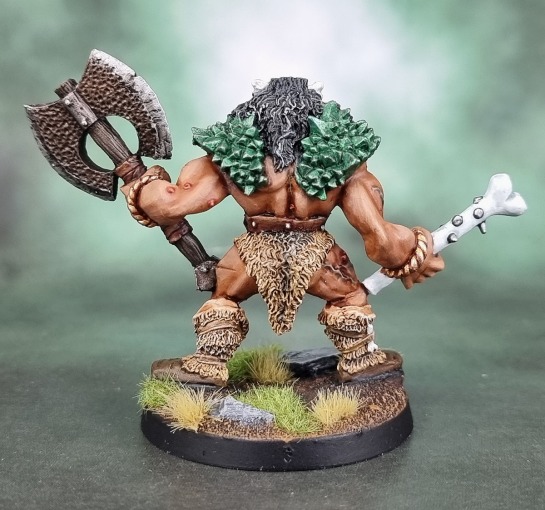 It does look pretty good front – or even back-on, so I think if I use this one in a Kings of War force he’ll be best placed in the middle of a unit, with other models on his flanks to “hide” the flatness. As far as the painting goes, mostly earthy tones with the exception of the shoulder pauldrons. I guess they were “supposed” to be painted like ice crystals because Ice Troll, but I thought a metallic green had a nice enough kind of weird fantasy look to it in my mind’s eye. With all of the fur and bone details on the model, I went with a middle “barbarian” skin tone befitting an ogre who gets a fair bit of sun (as opposed to an “Ice Troll” with lots of exposed skin?). I also wanted the bones he’s wearing and holding to be distinct from his tusks, skins and furs, so I went for white rather than yellowed bone.

So… yeah. Nicely detailed model and an enjoyable, straightforward bit of painting that actually has a use in my long-dormant Ogre Army…