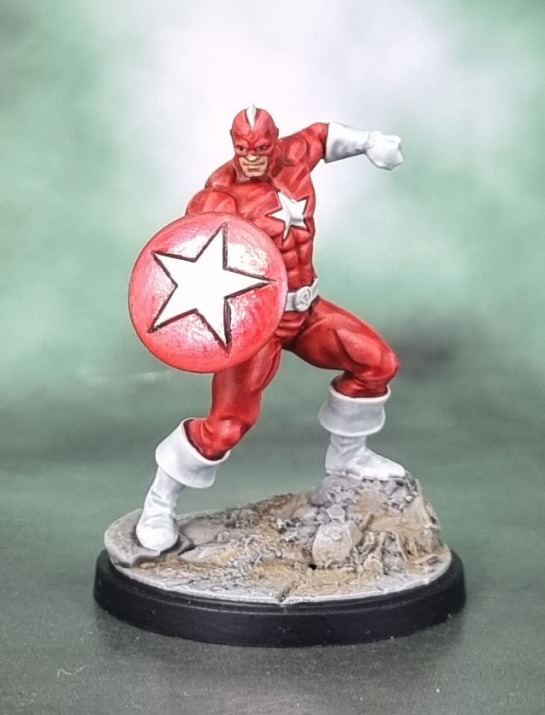 My next Marvel Crisis Protocol is Red Guardian – or as I think of him, Captain RedMerica. Yes, it’s the Soviet knock-off of Captain America. He came in the same box as Ursa Major, so it made sense to try and paint him up – especially with such a basic outfit. In the comics, his shield has several different ways of being illustrated, so I just chose this one and then rendered it using metallic paints. I used Vallejo’s metallic reds, highlighted up with a mix of silver and the red, then glazed with Citadel Bloodletter Shade paint. The star was painted using Velljo Model Air Chrome and shaded with black wash, then re-highlighted. At the end of the paint and seal process, I went back and gave the shield a gloss coat.

Contrast Paint did most of the heavy lifting this time – Apothecary White for the boots, gloves, belt and stars and a mix of Greenstuff World’s Red Cloak Dip and Citadel Blood Angels Red Contrast paint for…. well, I’ll let you figure that out yourself. Both colours were then highlighted in the usual manner using regular hobby acrylics from Vallejo and AK. This model was an easy win really – but there’s nothing wrong with taking easy wins when they present themselves. 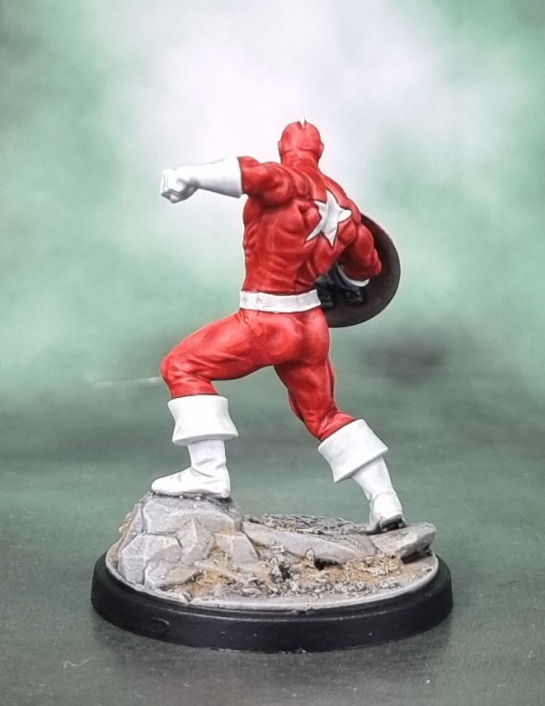 I did read a little about this character while looking him up, and all I’ll say is that I much prefer the depiction of him in the Black Widow MCU film – right down to the MCU outfit. This model of course has the “classic comic” look of skintight musculature-hugging clothing with pirate booties – just like classic Cap. A shame from my personal perspective, but I get it. 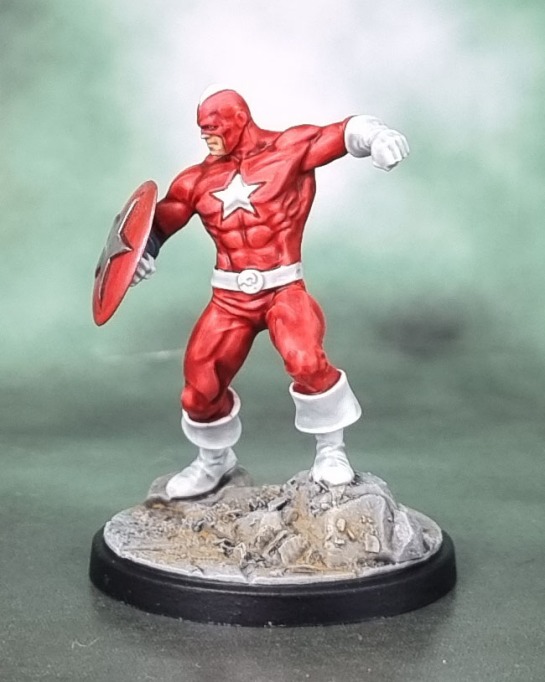 This gives me three out of the four models painted for the “Winter Guard” MCP faction – the last outstanding one being Darkstar. Unfortunately, Darkstar is in three pieces still and so won’t be joining us for a little while. Perhaps she’ll arrive during Fembruary?

Red Guardian is another MCP model painted for my growing collection, and also another painted that qualifies for Dave Stone’s Paint what You Got challenge.

While I posted up Ursa Major from Marvel Crisis Protocol in the previous post, I did so because I wanted to keep the bears together, but he actually wasn’t the first of these models that I completed in January – that honor goes to The Crimson Dynamo! Why Crimson Dynamo, you may ask? (probably not, but let’s go with it…) Because Iron Man, of course! I want to ensure that I do a job that I’m happy with when I paint Iron Man (still WIP, this many weeks later) and so I wanted to see how well I could pull off the technique of using brush-applied Contrast Paints over a metallic base to try and get a nice metallic red final effect.

That meant I needed a guinea pig to see how it might turn out – and what better model to go with than Soviet Not-Iron Man wearing a repainted Darth Vader helmet?

As you can see here, it worked well enough. It’s not the candy paint effect that Tony’s armour would have, but then I wasn’t quite going for the same thing – this is a slightly duller red (over silver rather than gold) and the highlights are using silver-added to Vallejo’s one of metallic reds. I used blue instead of yellow for his palm-blaster since I wanted a colour that would stand out, and the ARC-reactor/star on his chest is done with metallic yellow (hey Faust!) using yellow contrast over silver. Should that little round thing on his back be a glowy arc-reactor? I’ve seen it painted both ways at this point. I’ve also seen the circular joints on his knees and hips mostly painted red, but I liked how they looked as a plain steel (or titanium!), so I left them as they were.

In terms of the character, Crimson Dynamo is one I was aware of, though I haven’t read any stories featuring him. He’s basically 1r0n M4n: Soviet Edition from Teh Red-vengers because most of Iron Man’s arch-foes need to be bad dudes wearing similar armour with similar powers. An aspect absolutely unique to Iron Man.

So anyway, the sculpt has some damage and dings on his armour, so I went with those and also added a bit of paint chipping to his armour. I finished the base using some bricks clipped off some Mantic Terrain Crate brick walls and slate chips added to the base, since his tactical rock had a bit of brick wall on it anyway. A simple, but hopefully effective model, and another one done for Dave’s Paint what You Got challenge.