A quick and dirty post today – Just something fun to show off all of the Orks that I’ve recently painted in a group shot. Da Boyz are certainly back in town! By the time their codex comes out, I’m hoping that I should be well on my way to a small (points-wise) but playable force. I’m quite pleased how well the Orks from such different eras work together as a group. Consistent basing and an overall shared palette/theme really make a difference!

This Ork hails from the second proper wave of Space Orks back in the Rogue Trader days, when they were just transitioning from the RT codes into the “serial numbers” to designate each model. White Dwarf 106 back in October ’88. Today being the 1st of October, 2017 it’s effectively taken 30 years for this guy to get painted!

I’ve gone for very much an old-school style palette on him, though probably less bright and garish than some of them. Clothing and armour are otherwise again in earthy tones that still fit with the overall “desert warrior” feel (even though his trousers are in a woodland camo variant)

The weapon being worn (but not rusty!) metals and his stahlhelm in bare metal as well. No “WAAAAGH” title for this post, since this guy is a figure I pulled out of my stash to paint for enjoyment rather than one from the still-being resurrected Ork force. So he’ll still be part of the army, but I’m not sure where he fits in yet. 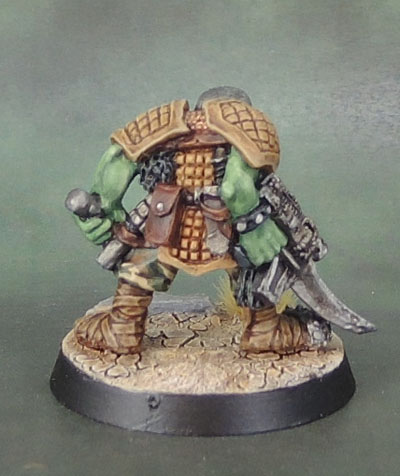 As with most Orks of the day, rather than boots, he’s got puttees wrapped around his feet from his toes almost to his knees. This was Kev Adams’ style on the fantasy orcs that he sculpted in those days, and something that directly carried over to almost all of the original Ork line.

I’ll hopefully have some more figures up shortly. Unfortunately I’ve still been a bit ill and so more dopey and confused than normal, so I’ve not had much energy for painting, blogging or replying to others’ posts. I photographed a couple of other old-school Orks at the same time as this guy, but the photos were way too blurry to use, so I’ve got to take them again, and that put me off posting anything for about a week since I still needed to crop this guy and the third one and didn’t have the energy/mental constitution for it. Pretty pathetic, eh? I’ve still been looking at people’s stuff though, so if you got a like without much in the way of comments recently, that’s why. 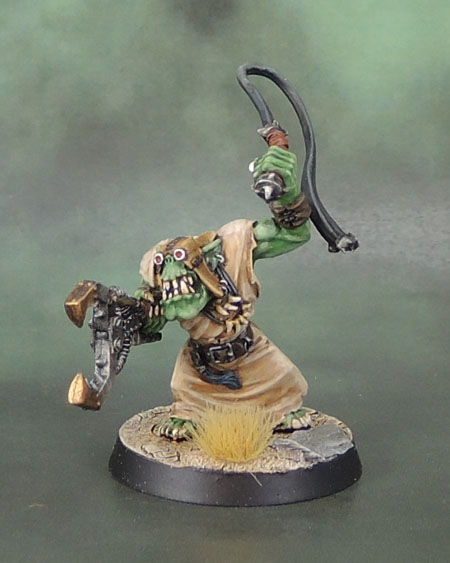 A bit of a slow week this last couple of weeks for posts as I had exhausted my backlog of recently-painted-but-unshown models, and to be blunt had a bit of the old blogging-burnout. I’ll slowly catch up on people’s posts and keep on painting here to get more new models finished. Still, I do have something today – one of the models I’d planned to complete a couple of weekends ago but only managed to do during the week. This guy is from the GorkaMorka range, which was a side game of GW’s (now known as “Specialist Games”) and the sort-of successor and replacement for Necromunda in their release schedule. GM never took off like Necromunda did, and my group never actually played it at all, which I felt was a shame, since it looked like a fair bit of fun. I did, however pick up a ton of GM kits, which I guess might start to be assembled and painted now that I’m resurrecting the Orks.

Palette-wise, I kept him fairly simple and muted. A robe that started as off-white before being dirtied up quite a bit, some leather gubbins and the old Pilot’s cap all in browns finished him off.

Of course, Bruce Spence’s iconic character of the Gyro Captain is a visible inspiration for this figure’s look – not to mention several other Orks through the years. Of course, Mad Max 2 has been a huge influence over much of popular culture in general and 40k in particular – and especially so for Orks. I mean Just Look Anywhere. 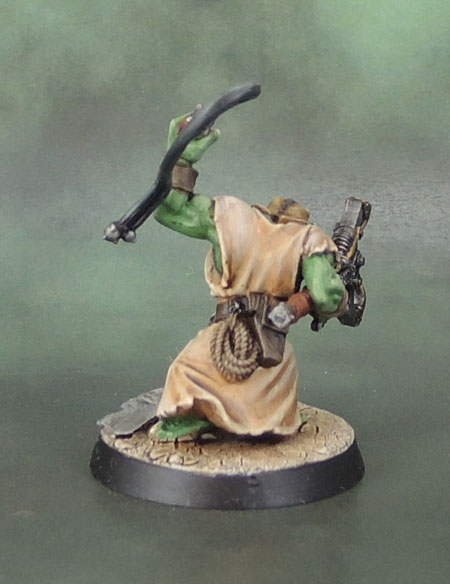 Ork Slavers are generally also called Runtherds, and have been so since the RT days. One thing that is for sure is this figure was called “Ork Slaver” for it’s GM release. So this means there’s something missing here!

Now at this stage I don’t have any runts ready for this guy to herd …yet. But rest assured, when they get sorted out, this guy will make an appropriate reappearance here on the blog. 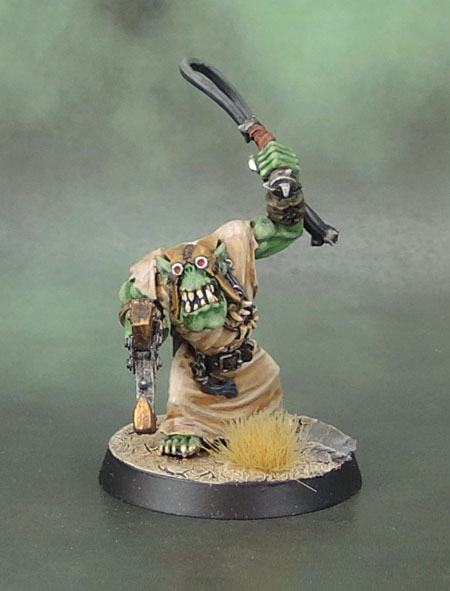