Here’s the final of the three, very neglected, vehicles I managed to make myself finish through November. I really should have taken a “before” picture of this model, but it was very much something that was warped, repurposed and then cobbled together. Originally, I got this as a secondhand piece, covered in spikes and bits of the original Chaos Vehicle Sprue and painted in a dark blue of (presumably) the Night Lords. After disassembly, I found that the hull was mis-aligned and the hull was heavily scarred with plastic cement from where all of the crap was glued onto it. I covered the holes at the front and back of the hull where the joins were, as well as the scars on top, sides and front of the track assembly.

I considered removing the spiked hedgecutters, but they really did not want to come off, and so I’m writing off that one bent spike as “battle-damage”. I added some etched brass details as well – the large Legion Skull Icon on the front of the hull as well as the smaller IV and Icon on the fender and turret. The large Legion number and vehicle name were from the Forge World decal sheet.

The metal top hull plates didn’t fit well at all, and the same was true of the two halves of the turret. I tried to fix both, but to no real avail – it feels like they’ll be one of those things that other people don’t notice too much but annoy the hell out of the painter (me). I’ve also added some hazard stripe decals on the hull and rear of the turret, as well as painting a small amount of the trim in copper to make the vehicle a little more like my older Iron Warriors infantry.

As one of the engine exhausts was missing, and naturally the fine pipes were all broken, I reattached a pair of the exhausts at the rear of the tank – though with the engine hatches located at the rear of the hull it doesn’t seem a terrible fit. I also needed to fill in some space to bulk out  the rear of the track sections, so a combination of a pair each of jerry jans and the original rhino kit stowage crates covered that. With the finish, I wanted it to look “clean”, yet worn – befitting the more orthodox Iron Warriors. 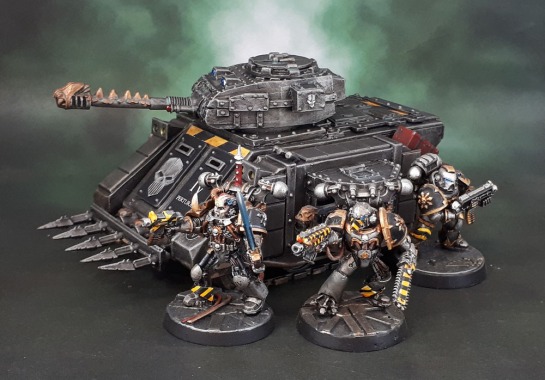 Here is the Predator alongside some of the Iron Warriors infantry that will be fighting alongside it.

Yeah, MechaNovember. Last Year. I did say I had some backlog to post up, didn’t I? This is an original Rhino kit from WAY back in 1989 that had been through at least one rebuilding, and a lot of abuse until I decided to rehabilitate it as a Plague Marine Rhino back in the mid-oughts. It’s been through at least two partial repaints since then but never managed to get to the finish line until the end of last year when I managed to managed to use the momentum off the back of completing that Flesh Tearers Razorback to get to the “just fucking finish it” mentality on this Rhino kit.

As a kit that had been built and rebuilt a few times, not to mention copping a fair bit of converting, it’s got a lot of parts from random kits such as cut down (original) Necromunda Bulkheads replacing the original side hatches, plasticard on various parts of the hull, corrugated card in a few spots, a huge strap-on …barrel from some Verlinden aftermarket armour kit on the rear, an undead shield, GorkaMorka dozer blade, (metal) Chaos Terminator trophy racks, a chopped-in-half Plague Marine from the mid-90’s as a crewman rocking a pair of twin-linked linked (Ork) Bolters from the late 2nd edition era as well as a Puppetswar Shoulder pad and an Anvil Industries opposite pauldron and backpack for that slightly cut down vehicle crewman look.

The wooden parts were used to give a consistency between that particular line of Plague Marines that had a lot of wooden furniture on their weapons. The door on the front as well as the top hatches came from some random plastic model kit, while the front hull panel was from a metal Warhammer Siege palisade that I got, damaged in some purchase or trade. Finally, the Nurgle Icon is from an Icon Bearer model, while the Iron Wariors Icon is etched brass – and I added a friendly nod to the Imperial Fists in the form of a Primaris helmet on a wooden mount.

I tossed up whether to go with hazard stripes, as I typically would for Iron Warriors but decided in the end not to add them, letting the rusty iron and reddish wood tones play to both the Iron Warirors Legion as well as to the copper armour of those Legionaires that had decided to follow the path of the Plague Cult. I wanted the vehicle to both fit in with and stand apart from my other Iron Warriors vehicles. 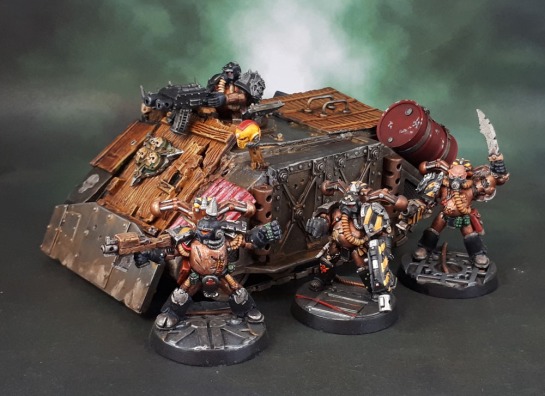 Finally a shot of the Rhino alongside some of the Iron Warriors Plague Marines that will be riding this thing into battle.