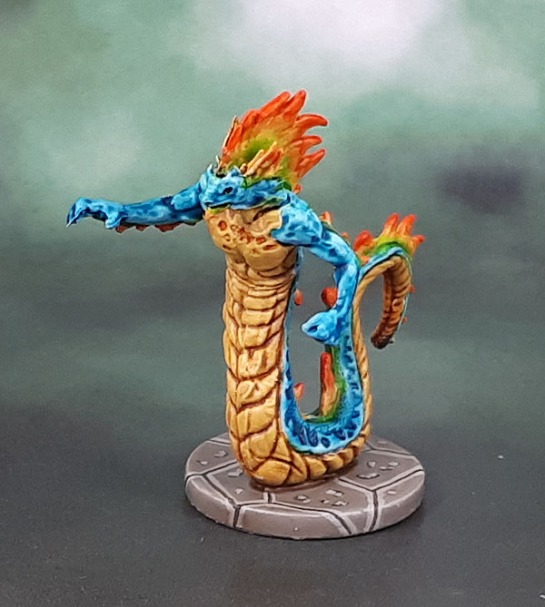 And now we’re back to regular models. Though I’m still playing catch-up posts from August into September. Yesterday and today were hell days for work – even though I”m (mostly) working remotely with some flexibility, there’s a deadline for next Tuesday so I pulled a late-nighter-early-morninger to get it all done, then headed in, then did my excercise when I got home, then crashed like the Hindenberg. (Too soon?) So this should have gone up yesterday, but you gets it now. 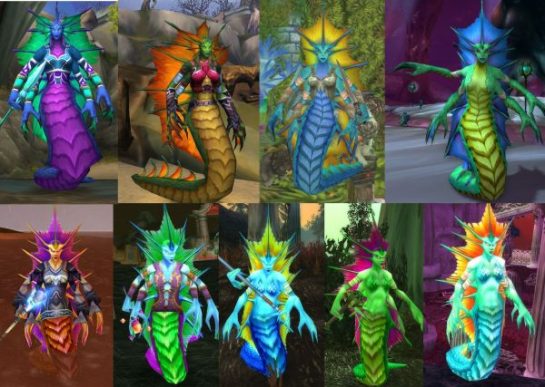 This thing is apparently a Salamander from D&D. Though I did that thing that I sometimes do, and didn’t bother to look up how the model “should” look (officially, at least) and just went with how it looked to me. And some of you may have already twigged, it looked to me like a Naga from World of Warcraft – one of my most despised types of enemies. So I looked up some examples of WoW’s Naga, and used one of my more commonly-encountered palettes of these over the years as my guide. You can see they’re quite colourful. 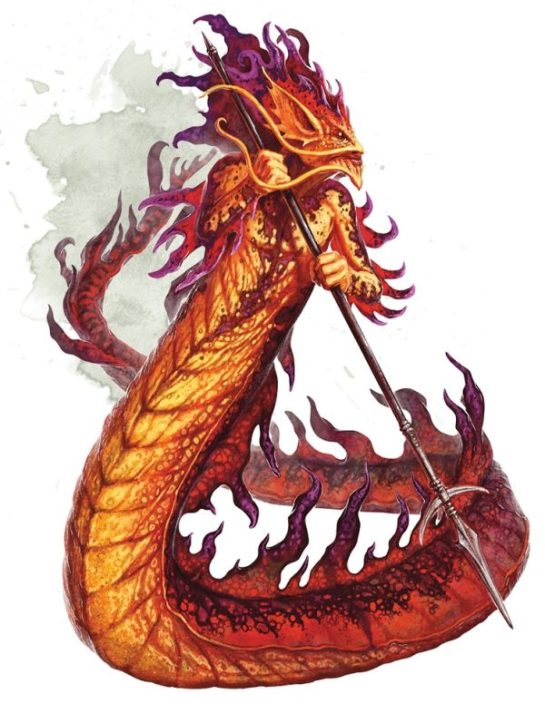 Which is kinda funny now, as I’ve literally just looked up what this model and officially looks like is properly called as I started writing this post. (The primer obscures the text underneath these newer figures, post Drizzt). So it’s just now that I’ve seen that it’s a Salamander, which is apparently a fire-based elemental (makes sense for the Temple of Elemental Evil, I guess) and that it should usually and properly be painted all firey and shit. Oops?

Oh well. I’m sure it’ll work just fine as a single model in a boardgame, and the D&D Police aren’t going to try to break down my door anytime soon, so we’ll live with it. 😀 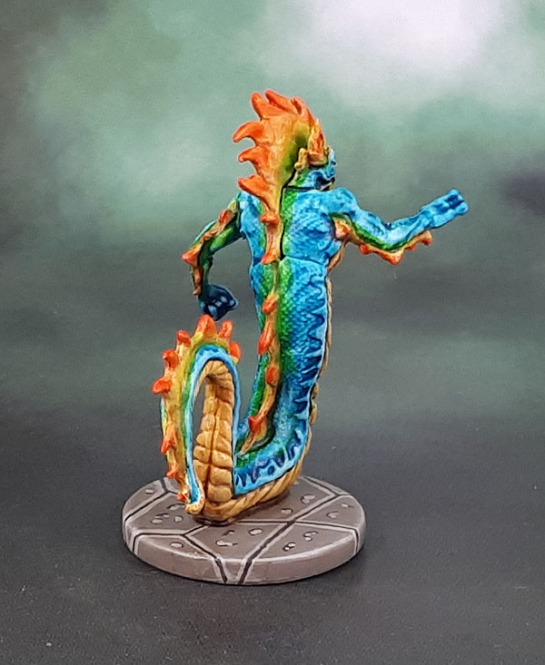 As far as the model itself and painting it went, it’s an “ok” tier model at best, the facial detail is pretty dodgy. So I decided to use it as another Contrast Paint experiment, and also try out the new Tesseract Glow technical paint to see how it works – it’s the green element of the blend of blue through to yellow on the back and crest.

I mean, if I’d realised it was a red, firey elemental beforehand, I would have painted it more canonically, and just used it to try and push something like those black-red blands along the spine, but I don’t care enough to go back and change it or anything. This is the sort of figure I term a “trash model” – which isn’t quite as insulting as it sounds, but it does mean that it’s a model I don’t care about – so options are generally either to:

1) paint the fucker and get it done as quickly and painlessly as possible.

2) use it as a subject to experiment on and build my skills, without any worries that I’ll fuck up a sculpt I care about.

This model was very much a 3).

So while this model isn’t going to win any painting competitions (not that I enter them), something liek this definitely has valid uses – I know how several of the Contrast Paints look and behave (I like the Bone/Yellow mix on the underside, not keen on the Teal-Blue on the arms, but it looks ok on the tail, some messing around with a brand-new paint (the transparent-ish green) – and I have another painted model for a board game! (even if it’s the wrong colours!) 😀

Today’s model is another one from August, and one that fits both my long-running D&D series as well as  Dave Stone’s Winter of Scenery Challenge! In Dave’s words: “I think we should also include vehicles as this can be used as strategic scenery pieces as well..” And well, I guess this thing is technically a construct – though according to the D&D Wiki I checked some of these things can basically take a couple o f passengers and effectively be driven around, so…. but it’s absolutely the kind of model that will fit in nicely as a bit of static terrain on a fantasy board.

Almost every pic of these things I’ve seen online show them as being a pretty rich green. Descriptions on the other hand describe them as stone. Now, I know that greenstone (jade) is a thing, but instead I went with brownish grey stone and added some greens and ochres to repsentend mold and moss, as well as a few shades of brown on the roller wheels to represent dirt and mud (and yeah, I need to go back and add a tiny bit to the front). No green on the sections that would touch the ground though, because you know what they say about A Rolling Stone…

I’ve added in my little collection of reptilian humanoids here for the scale shot, because fantasy games have given us such a strong association between reptilians and vaguely-South American histoirical cultures… There’s also a sneak peek model here that’ll have his moment once I get these models for Dave’s Challenge up and posted!

2 more terrain posts of stuff finished in August, then the Scenery Wrap-up on the weekend…