While it might seem cheaty to finish a single model and call it another squad complete, that’s exactly what I’m going to do here. Mostly because finishing this Ork Nob does indeed finish off another Mob of my Orks. I left him and his mate from a week or so ago to paint last – after I completed all of Da Boyz, because I wanted to do a little bit extra on them – and painting these metal Nobz to lead them would serve as my reward for slogging through the plastic boyz.

I may have combined the two of them into a single post, but when my camera’s battery ran out, it put paid to that, as I didn’t get it charged and more importantly back out to take photos again for a few days. I’m good with that regardless, as it let me focus on this guy a little more in the photos.

As with the previous Nob, some coloured washes on his armour plates and choppa to suggest heat discolouration when it was being forged (or beaten into shape!) as well as the Blood Axe-ish camo clothing and the tusks and horns on his helm painted in bone rather than silver (which just didn’t work well). 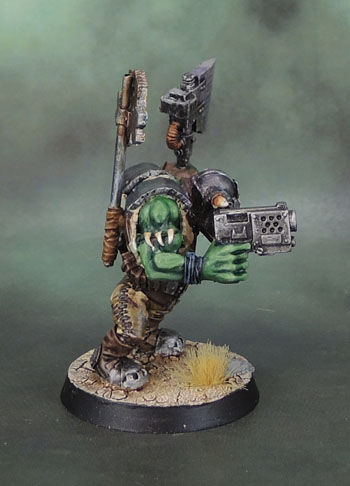 Hm. I need to go and grab the model to check what’s going on with that spot of white underneath that toof on his armband. (Later: It was a spot of paint. Fixed now!)

For something a bit different on this guy, I took the opportunity to experiment with some rust discolouration effects on white-painted metal. Not a terrible start for a first try, I’d hope you agree? I might try incorporating some crackle medium next time I try it and see how well that works. When I get working properly on Ork vehicles and walkers, there should be plenty of opportunities to keep playing with these techniques.

And a shot of him with his minions. This leaves …not too much more to complete this first Ork force from 2005. Just the Warboss, and a herd of Grotz. I used the GorkaMorka Snotling models, so we’ll see just how painful they turn out to be, as they’ll all have to be rebased in this “cracked earth” style before being finally completed. I’m guessing, pretty painful. Once that’s done, I’ll do an army shot. I can probably force myself to complete the Warboss during Neglected May, and the Grotz for Squad: June…

In the last week or so, I’ve finally finished this Ork Nob that goes with about half of the Boyz that I’ve painted. He’s from the old-school metal Nobz boxed set from the mid-1990’s that contained five metal nobs with bosspoles. The helmet comes from the metal Black Orcs of the same period, as I wanted the Orks that lead the Mobs to look like particularly nasty bad-arses. Initially I’d painted the horns and tusks in silver, like forged metal but they simply blended in with the rest of the helmet, so I redid them as horn. 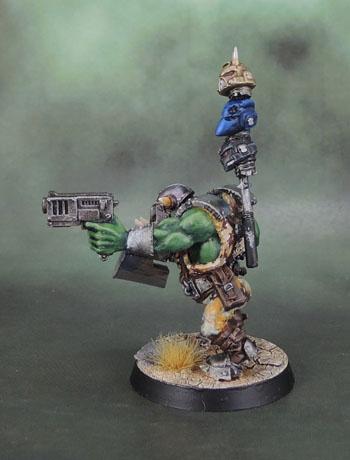 He’s a hefty dude, and as with the rest of my Orks I’ve painted him with camo clothing to tie him loosely to the Blood Axe sub-faction.

As the bosspole features some Space Marine helmets, I thought I’d paint them up as three of my own armies – Minotaurs, Celestial Lions and Black Templars (or any of the other black-helmeted Marines I have!)

I’ve also given his helmet and axe a bit of subtle washing with blue, purple and brown for a bit of heat discolouration that also ties in with the trio of Killer Kans that I started awhile back (not much more done on those at this point!)

And here he is – completing the squad! Well, the Mob. The thing with my challenges is that they’re all about completing stuff, so the fact that this single model was all that was left outstanding for this unit to be completed… well, I was motivated to get this guy done, and now the unit’s is completed. Start-to-finish is all well and good – and great for many instances, but for most of these monthly challenges, I’m more concerned about completing things.

Sure, the number of boyz in the mob might need to be juggled a little to make the unit line up neatly with the most current ruleset, but this group of Orks goes back to 2005, so for now – they’re all good.