Here’s the next few of Da Boyz that I’ve gotten onto recently. Only four this time rather than the seven shown a week or so ago, but getting finished models posted and the feedback that it entails helps a great deal to keep me motivated to keep painting. And besides, there’s well over 20 more Orks from this little initial foray to paint yet, so I need every bit of motivation I can get to get through them!

The first pair are the Slugga Boyz. Nothing too detailed to write about here. One Ork is fully outfitted with Auscam (Australian DPCU) while the other wears Choc-Chip (U.S. DBDU) pants and a camo loosely based on a variation on US M81 Woodland. Once again a few Fantasy Orc parts are mixed in, giving a bit more variety to the 40k plastics. 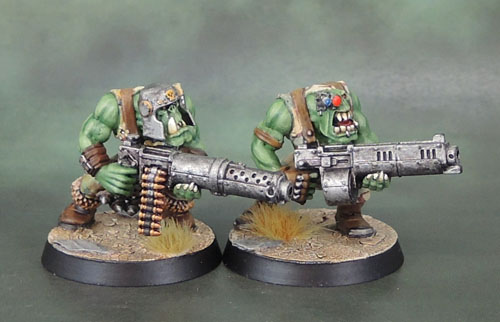 The Big Shoota Orks also wear a mixture of Auscam, Choc Chip and Coffee Stain (U.S. DCU) and feature a few fantasy bits mixed in. The ork head with the Bionik Eye is a metal piece, which I think came from a metal Big Shoota model. Both of these Big Shootas are simple conversions from regular shootas – back when I got my first 40k Boyz, there were no plastic Big Shootaz, Rokkits, Nobz… you get the idea. Later they became available in metal, and I’ve got a pair of metal Big Shootaz and Nobz coming up in the same big batch of Orks that I’m working my way through.

The “conversions” here are a pretty simple kitbashes. Simply taking a pair of shootaz for each, chopping the muzzles from one set and the whole barrels from the other two, then gluing them in an appropriate looking pair. I did also extend the ammo belt with some spare rounds. Not that it’s any kind of automatic’s worth of rounds, but it’s Warhammer, after all, so…