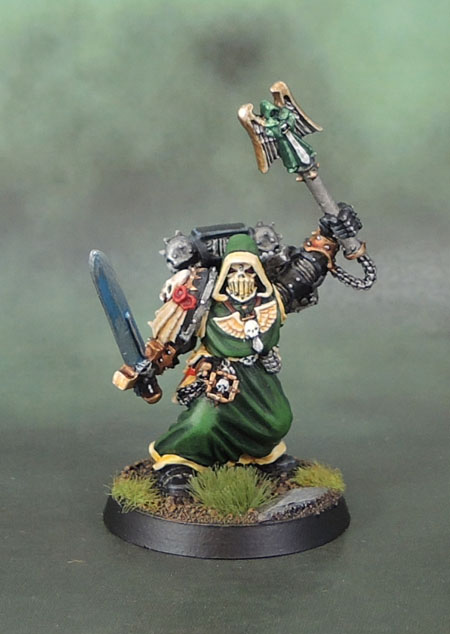 Another model that was part-painted for many years. Jes Goodwin’s original sculpt of Asmodai. Once again, the revival of Warhammer 40k has really resurrected my interest in the game and its models, and Asmodai is the latest of my old, half-painted and forgotten marine models that has been taken out of his foam-filled sarcophagus, rebased and then finished.

I can’t say enough positive things about this sculpt. I’ve always been a huge fan of Jes’ character model sculpts, and this one really captures all three key elements of Asmodai perfectly – Space Marine, Chaplain, and Dark Angel.

As I’ve noted before, I was never especially taken with the early (2e) change from green to bone-coloured robes for those in the Dark Angels/Deathwing. The green robed figures in their iconography really captured the DA feel much more for me, and so I decided to just go with the green on Asmodai, giving him a bone-coloured robe hem on a whim as I thought it would look good. I painted his mask with bone, though I have seen some nice work with iron/silver over the years, but still – Chaplain. His pistol holster colours reference the 2nd Octavius Crusade Company, which is the designation of my personal DA army. 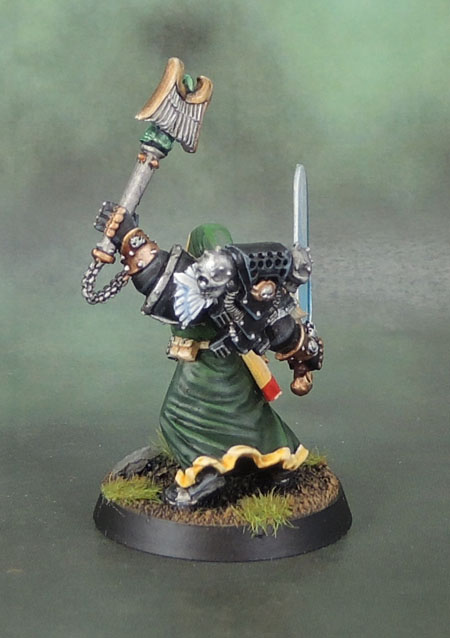 Obviously under the green robes, I’ve given him the traditional black armour of an Astartes Chaplain and picked out his more ornate armoured elements in iron and a dark copper, which I continued to his wargear. I added a 3D-printed Dark Angels icon to his right shoulder which I got from Pop Goes The Monkey on Shapeways. Seems that GW is busily C&Ding his designs down at the moment, both the ones that are reasonably GW-owned as well as ones that are much more dubious as far as claims go (at least in terms of GW “owning” them). It’s pretty Chapterhouse in many ways, but I doubt that PGTM will be able to fight them in the same was, as CH lucked into a quality Pro Bono legal defence. Bascially, if you want any of their stuff, go buy it now before it disappears!

Rather than going for plain iron or the metallic blue/silver that I like to use for power weapons, the Palette of his Crozius somewhat echoes that used on traditional Dark Angels iconography, though using metallic shades of those colours for the winged watcher. Now I really need to get a Company Master finished for these guys so I can then get onto the more interesting heroes and spend some time slogging through the DV tactical marines…