Today’s models come from Descent: Journeys in the Dark 1st Edition. I picked it up secondhand several years ago, when I heard about how great a game it was, blurring the lines between RPG and miniatures boardgame. Shortly afterwards, the Second Edition came out, though I did pick up the official conversion kit, I’ve never gotten around to playing either of the things yet.

A month or so I got the idea to paint the Giant Spiders out of the 1e box. While I was poking around in there, I found these Hellhounds. Figuring that they’d paint up pretty quickly, I ended up putting the Spiders back and working on these instead. They didn’t take too long to get done, and being pretty rough figures I wan’t going to knock myself out over getting the absolute best paintjobs on them, either. Tabletop is good enough!

Descent uses two different “types” of each monster: “White” ones, which are normal, or trooper-types and “Red” ones which are champion-level and tougher. So the sculpts come in two colours of plastic – Red and White (actually, more of a cream, but I digress). In order to be able to identify the two types, I painted the “White” ones with brighter orangey-red and red-to-yellow flame-fur, while the “Red” ones were painted in a slightly deeper, darker red and have yellow-to-black flame-fur. Enough to distinguish them when needed, but close enough that they still work in a pack for other games. 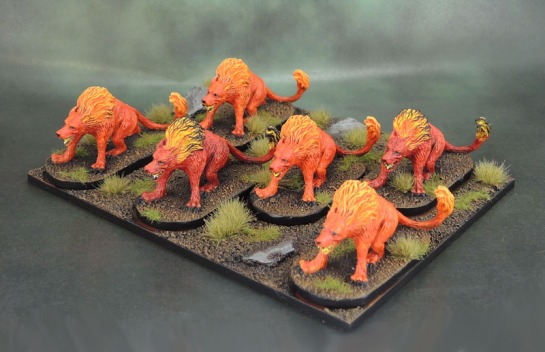 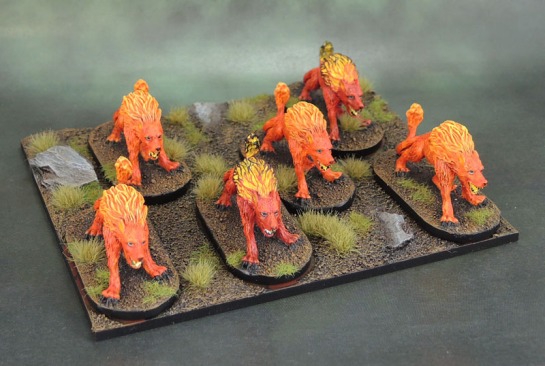 Speaking of other games, I knocked up a multi-base for them so that they can be used as a regiment in Kings of War. They’d be used as Proxy Hellhounds in my Khorne Chaos Daemons army, which in turn will be using the Forces of the Abyss/Hellhounds entry. Which I’ve just noticed while looking it up to write this only come in units of 5. And naturally, this base is made for a nominal unit of 10. Feck. That’s annoying, especially as they’re actual Hellhounds. Though the Mantic models also come on pissy little 25mm bases from Dungeon Saga, so perhaps the more appropriate proxy entry for these models will actually be a regiment of Abyssal Horsemen.