A few more bits of my Mantic Terrain Crate Kickstarter pledge today. Specifically three sets of barrels and three individual barrels alongside some dynamite sticks. You’ll also see another WarZone Undead Legionnaire there for scale. That particular Legionnaire is the one that was missing yesterday that I found after taking all of the photos. I spent a bit of time last night bringing it up to speed – fully repainting the boots and gaiters, most of the weapon and then adding some blood (after varnishing the bits). I’ll be going and editing him into yesterday’s post in just a few…

In a way these are some of the better Terraincrate bits – they’re just fine. Not amazing. Just fine. I’ll probably go in and fix up those bits we can see here where the wash has missed some of the crevasses.

More importantly, these six bring my monthly total up to 29. So I’ve got two more models I need to finish in the next 2 1/2 hours. Luckily, I have a trio that are almost done, so time to knuckle down and get it done.

Firstly, the models themselves. They’re 7 of the 8 models from the two old-school WarZone blisters, TG9505PB: Warzone Dark Legion Undead Legionnaires and TG9511PB: Warzone Dark Legion Undead Legionnaires. Clicking those links will take you to Prince August’s site where both are still available from original stock after all these years. Pretty good sci-fi zombies, to be quite honest. Old-school WarZone collectors often get in contact with me and ask if I have anything to sell so I like to point out when the figures on show are still available where possible. (If I ever do sell any, I’ll post them up here – I promise!) 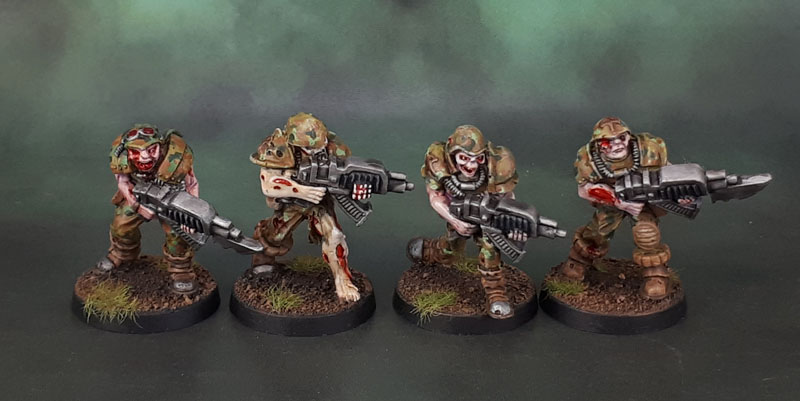 The missing eighth of the models was actually painted a few years ago. Now, I haven’t played WarZone for many, many years at this point – but some of the models were real crackers (some were awful as well, no argument there!) These sci-fi zombies with guns were always pretty cool looking, but I never really had much of a use for them. Still, I did a bunch of Blessed Legionnaires when I gave the Nurgle Cult army a first-go-round back in 2015 or so. Need to rebase that Spawn of Demnogonis as well onto a proper 32mm base.

Obviously, this lot fits in with my own monthly challenge – that of Unit-Ed October. Because it’s a unit of models. A unit of 7 in fact – Nurgle’s (un)holy number! Coincidence, yes – but a fitting one. Paint scheme-wise, I painted 6 of them in the same Auscam as the main elements of my Imperial Guard force – the 11th Terror Australis Regiment. The 7th has his carapace armour painted in greys in a nod to his Warzone Bauhaus roots.

And finally, I found out via Rantingsfromunder’s blog that there’s a thing called Zom’tober in the minis blogging community – though it’s one of those Blgospot ones, and we know that WordPress and Blogspot are a pain in the arse when it comes to getting on with one another. Unfortunately, it seems that Zom’tober has some pretty specific rules about completion that rule me out participating  …pretty much ever.

To take part you just need to paint one Zombie or Survivor (or more!) each week, in any scale you like, posting it to your blog by that week’s Sunday (we use Sunday’s as the end of each Zomtober week). So that means posting one or more newly painted Zombie or Survivor minis each week on or before the 7th, 14th, 21st and 28th this year.

Doesn’t really work for me. I finished 4 of these suckers at once 2 weekends ago, and then the final three last weekend – with the blood effects across all of them applied yesterday evening in two sittings. I mean, they’re zombies! Are there any other figures that lend themselves so well to batch painting?

So while they don’t exactly fit into the Nurgle Daemons army, I’m sure that nobody reasonable would complain about a bunch of poxwalkers thrown in there as well. I’ll have to figure out where I’ve stashed the Blessed Legionnaires and that other zombie and pool the lot of them together for the next time I do an “army in progress” type shot for the Nurglites.

Oh. And after taking the above photos, I found the 8th model. While he’s fully painted, he does need a bit of touch-up to get him to the point where he’ll nicely fit in with the rest of his cohort here. I might attempt to get him done before the month ends, so I can bump my monthly total up that little bit more towards the 31 I want to have done…

Edit – Got that last one touched up, retook three of the photos tonight (following night to original post) and replaced the original pics of three with the four.