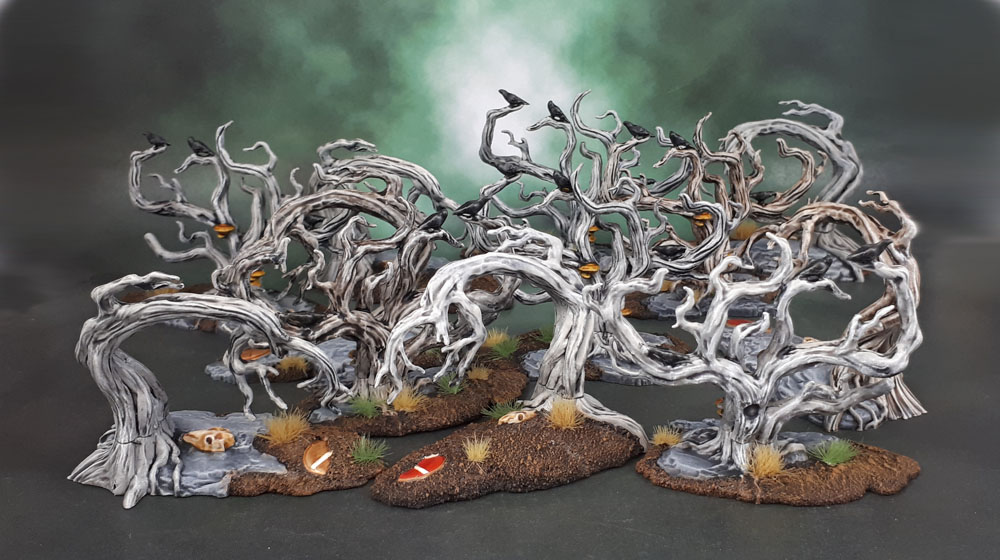 Some time ago, (bloody hell – a year ago!) I showed the completed Ruined Pillars from the Conan Boardgame Kickstarter. Pretty small and simple things, but then they’re tokens for a boardgame, and so they can’t be too large, as they need to allow for miniatures to also fit onto the segments. These trees follow very much the same cues. Hence their sizes are pretty small, though they’ll also work in a pinch on a wargame battlefield. 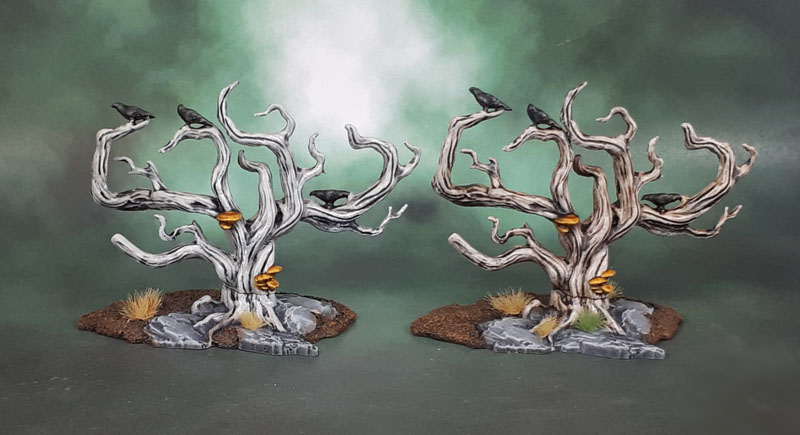 Once again, my plan for these trees was for an overall bleached, “dead tree” look, but unlike my previous attempts, where it just didn’t work using Contrast Paints, the detail on these ones was very much condusive to allowing me to achieve the dead and bleached effect I was after. I only used Contrast on the wood of the trees, though – bases were done in the traditional manner. The set came with six each of two sculpts of tree. I felt that the hunched over “C” trees allowed for more variation on their bases than the more upright ones (they’re a bit too small to be a proper Tree of Woe!) I haven’t shown all of each type here, because frankly, they’re not that interesting as individual pieces. And yes, that’s a glue line just above the base on both types of tree. That was one of the things that led to these being unpainted for literally more than six months.

Puttying over all those joins was something I’d planned to do, but the thought of doing so was (and still is) SO tedious that it put me off doing anything at all with them for the year that’s passed since I finished the pillars. I’ve got more than a dozen Wargs backed up for the same reason. In the end, what got them painted was a combination of another thing to trial the Contrast Paints with (along with the inherent promise of getting them done quickly) along with a willingness to finally just say “fuck it” to the idea of puttying all them joins. So quite literally – the time not spent on these is the time that has instead allowed me to complete those Slayers what I’ve been posting up here in the past few days, as I was working on both in an overlapping manner in July. Figure painting time is very much a zero-sum game. Now I just need to work out why I keep painting those Shadows of Brimstone models when I could be painting Stormcast or something – probably because it’s nice to have easy wins and not care too much from time to time… 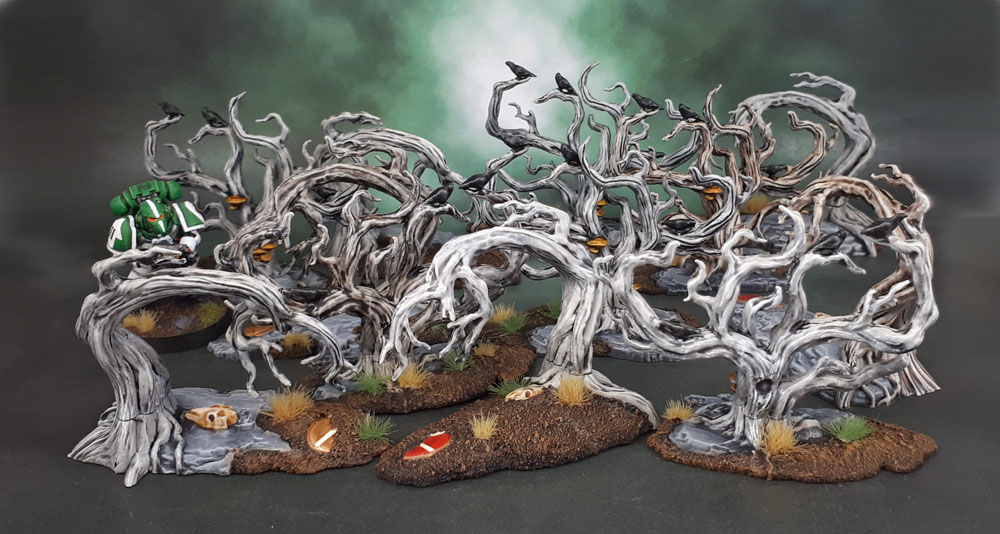 I have noticed, as I write this post up and insert the photos – that I forgot to add the touch of weathering powder to their bases at the end. I guess I will have to go back and add it (since it comes after final varnish), but again – fuck it – I’m still counting these as July-completion models. Oh, and if you’re wondering what the story is with the duplicated photo from the top one – this one’s a scale reference if you look carefully! 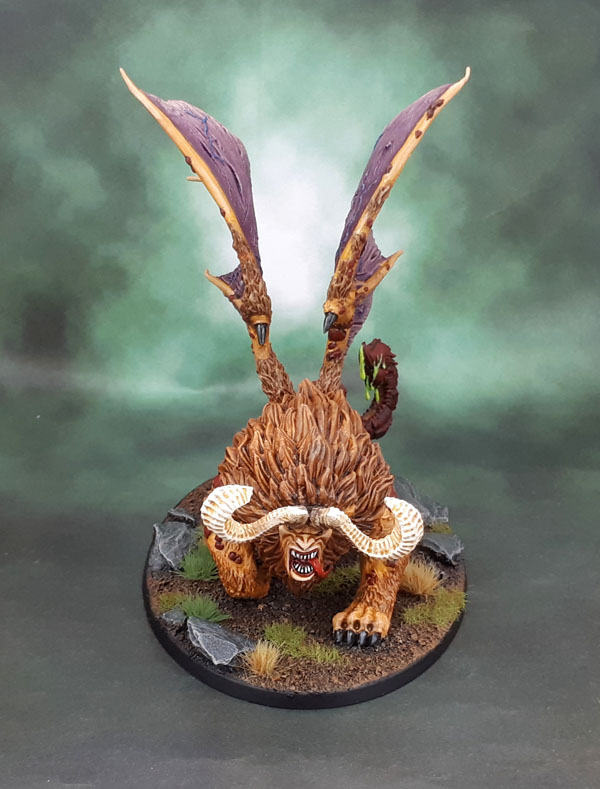 Today’s model is another from a miniatures-heavy kickstarter. More specifically, from the people over at Monolith Games, who also brought us the Conan Boardgame, and more recently, Batman (which I ain’t opened yet). I started this one shortly after finishing that Dragon from the Conan Kickstarter, by the same people.

They did a pretty faithful job to the artwork, too.

Funniest thing regarding the artwork and my paintwork – I just googled for and downloaded the artwork now to add to this post so we could see how the model stood up to the concept art. I painted the model without any reference pics – black claws, dark scales, luminous green poison…

I mean, it’s no real stretch to go golden and brown with a lion’s fur and mane. The oversized, Trish Carden/Morrison-style scales (a sculpting trait which I hate, btw) across the model were done in dark red-brown to mesh with the predominant colour of the scorpion tail, which is basically a way to give more interest to something that was going to basically be… not black, but dark. Luminous green for the poison because it contrasts well with the dark red, and because green is RPG shorthand for “poison”. I went with black for the claws to match the black for the wing-talon-spikes, because I felt black would look better on the wings against the tan. I went with a purple mixed with flesh for the wing membranes so they’d stand out and look monstrous, but not quite cartoony-monstrous. 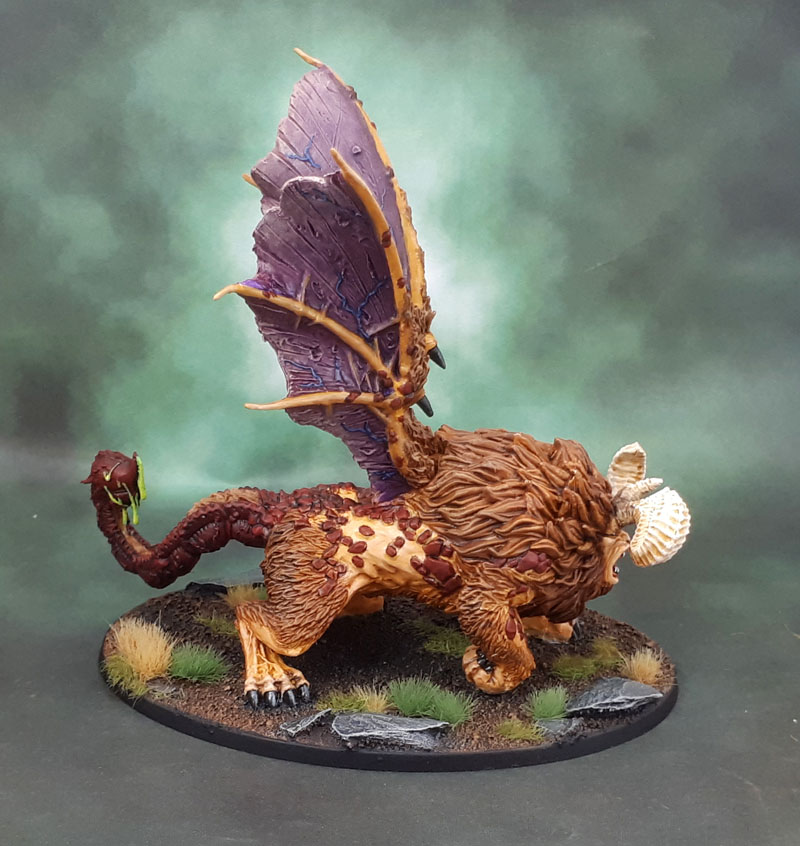 Overall, the model was a pretty nice one to paint, and didn’t take too long for me to get through, when compared to most other monsters. It’s quite a nice sculpt, unlike the dragon and it came mounted on the plastic base, also unlike the dragon – so it seems that Monolith learned some important lessons in between Kickstarter campaigns. 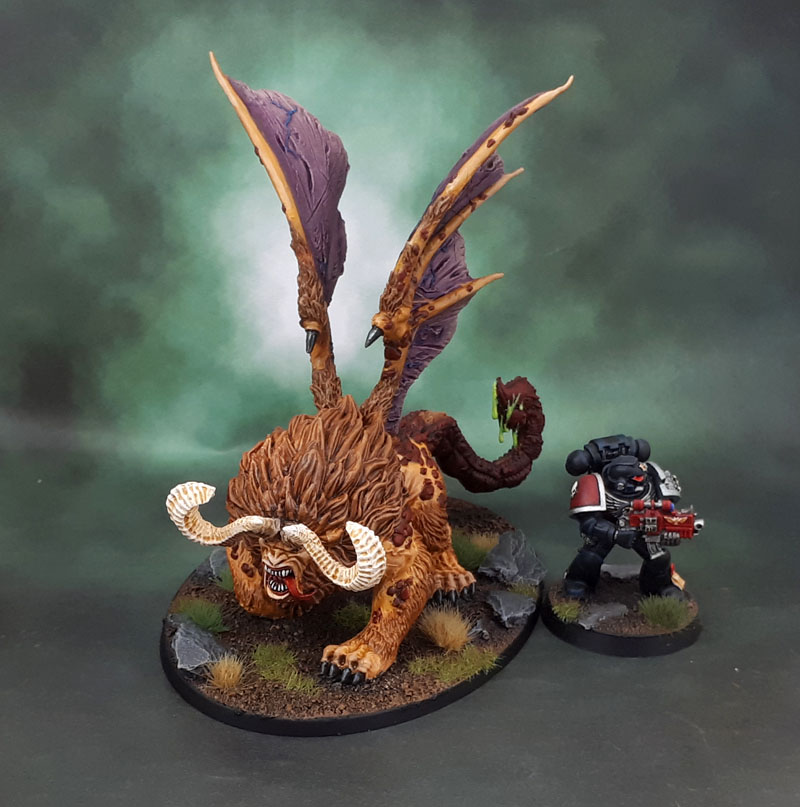 A Deathwatch Space Marine gives us the scale shot.

Speaking of lessons, I’ve got a bit of an unfortunate habit of starting more of the same kinds of models as soon as I finish something like the Skaven that I’ve recently finished and have WIP – picked basically right after I finished the Pestilens models, which is how this model got plucked from a box filled with KS expansion boxes. I mean, I’m happy with this model and how it turned out, but I have decided to stop myself from plucking any further large monsters until I complete the three or four I have on the go already. Yeah. Four.

Anyway, while a few elements aren’t entirely to my taste (the scales, horn shape) it’s overall a pretty good model and I’m glad I got it done. I can easily squeeze a beast like this into a variety of miniatures games, aside from Pantheon. If the rest of the models turn out to be produced this nicely, I’ll be quite happy…