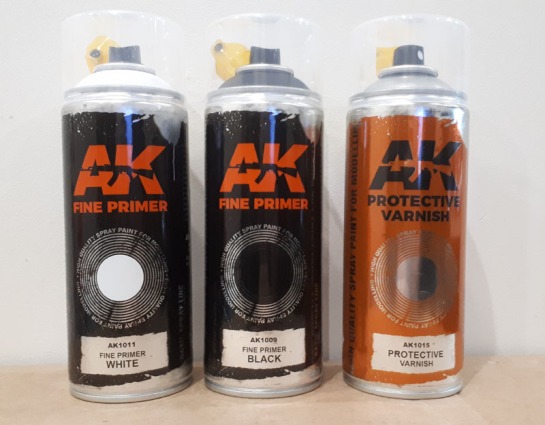 Something a little different today, but something I think that will (or should) be worthwhile to the wider hobby community.

For the longest time, I’ve been searching for a Matt spray varnish that actually gives a good, proper Matt finish. Like many others, the best I’ve come across to date has been Testors’ Dullcote. So a little while ago, when looking to replenish my stocks of Testors, I found that the place I decided to buy from, also stocked a number of sprays from AK Interactive, which is one in the long and storied line of companies that star painter, Mig Jiminez has been involved with. Unfortunately, I couldn’t find ANY user reviews of these products on the internet at the time. What else could I do? I bought one of each to try ’em out!

Now at this point in time, I’ve only tried three of them. AK1011 Fine Primer White, AK1009 Fine Primer Black, and AK1015 Protective Varnish. Once I’ve tried a couple more of the ones I picked up, I’ll review those as well. All three of these cans came with an additional nozzle, or a “fine diffuser for better paint application”.

All I can say is WOW. This turned out to be the best White Primer I’ve ever used. No joke and no mistake. It went on smooth and opaque. It dried quickly. Where coverage was spotty (due to my spraying angles) the followup sprays to pick up the missed areas went on just as well, and the overlapping areas did not have any issue with clogging. I’ve had no issues with my spray distance (as I’ve had with Army Painter sprays, which are special snowflakes with regard to their spraying distance). I’ve done a fair few figures since the ones photographed above, including a variety of PVC figures, and the stuff is a dream.

My previous favourites in white were Gunze Sangyo/Mr Hobby Mr Surfacer or the Tamiya Fine Surface Primer. Both are still fine(!) products, but the little cans are quite expensive, while the large, full-sized can of AK comes to about half the price for the same high (or maybe better) quality primer. All three crap all over the Krylon I’ve used in the past.

When I get a chance, I’m going to place another order (for me, it’s only available via mail order) and stock up with a half-dozen or so more cans of this stuff as I only have the one, and it’s going down as it’s now been my first choice in white. That’s how much I like it.

I haven’t tried spraying Reaper Bones figures, because they suck when trying to prime them.

I haven’t tried the fine diffuser nozzle, since I prime in batches.

To save a bit of time, I guess you can look over my thoughts on the White Primer above. The bar with other black primers is a bit higher than with white, which is so often a bit problematic, but yeah, this stuff wins once again – beating out Tamiya, Gunze and Krylon (the Krylon black is better than the Krylon white). It’s perhaps a little more obviously satin than the white, but you can still see how smooth it is on the trio of off-brand Skaven above. As with the white, it’s easy to paint over, has excellent coverage and is once again my first go-to for any models I care about.

I’ll be getting a half-dozen cans of the black at the same time I stock up on the white.

After such a pair of glowing reviews, I wouldn’t blame you at all if you were expecting similar here. Sadly my experience here was not positive at all – especially since this was the product that led me to finding and purchasing the others.

Let’s just take a snippet from the description on the official website:

Special varnish to protect your models and figures if is needed a constant manipulation. Developed for Wargamers. Ultra resistant and with the best adherence. The paint is a synthetic varnish that cures in a short period of time.

Uh huh. Sounds good, right? Developed for Wargamers, even (if I’m allowed to call myself that!) Well, what they fail to tell you, on the website; on the can; anywhere at all is that the stuff dries with a high gloss finish. You know, just like all wargamers want on their figures. Imagine my delight when I sprayed some models with this stuff, expecting it to dry with a nice matt finish, and found them an hour later still looking like they were freshly misted with water. Sorry, but you don’t get an example pic of those models, since they were quickly sprayed with a proper, matte varnish.

So yeah. More disappointment than you can imagine – especially after trying the two primers. While I’m sure the stuff works well enough for a solid protective coat, that’s hardly anything special – especially since my local hardware store sells two types of high-quality, fast-drying, non-yellowing gloss sprays (enamel or acrylic based – take your pick!) for half the price of this stuff. Not happy, Jan!

*Disclaimer: No part of this review was paid for, sponsored or in any way influenced by anyone. I purchased all of the above products at full retail with my own funds.