The entirety of March’s completed models.

Yeap, it’s been awhile. I’ve almost forgotten how this stuff works, but as I find time, I’ll be catching up. Aside from Swordmaster’s “Monster March” paint challenge, my own two community challenges for the month were “Squads” and of course the “Gender-Ambiguous” one. 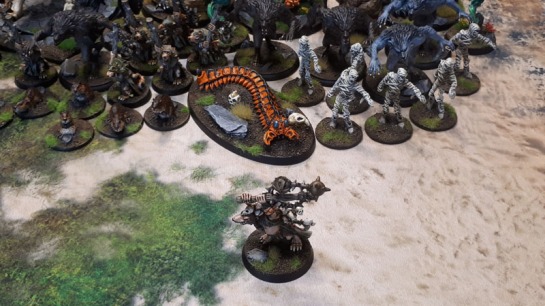 I say “partial”, because this model is an independent hero, but also works as the leader of the Plague Censer Bearers.

Interestingly, despite it not being entirely planned that way (because of course I wanted to hit the challenge goals a few times) it turns out that with the partial exception of a single model, they all fit into either one or the other – or both. And that’s aside from a bunch of them also working for Monster March. That one model, the Plague Censer Bearer hero is also the one model out of the entire month that is clearly and undoubtedly male. 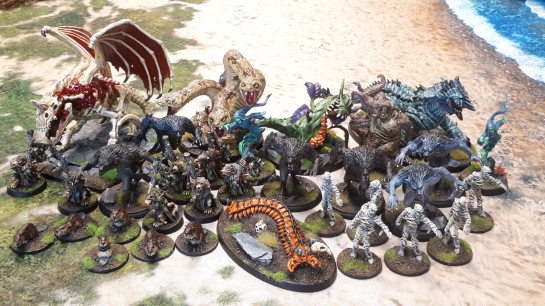 The Gender-Ambiguous models from the month.

I mean, I’m not kidding myself – and neither should anyone else. We know that pretty much all of these models were sculpted as “male”, with the exception of the Beavers, as they came from Bad Squiddo and would have been sculpted as a “beaver family” of both genders. But we also know that “female” ghosts would have cleavage, as would mummies, werewolves, and so on. I’m sure that even the Dracoliche and Dragon and Centipede were called “he” or “him” by the sculptor and/or designers rather than “she”. So the point of the month’s exercise wasn’t to fool ourselves, but to just stop, think and consider.

“Squads” on the other hand, are much more straightforward. The werewolves were originally going to be 2×3 as that’s how I painted them, though it hardly matters. Similarly, the Skaven work with or without the Censer Bearer hero.

I’ll get March (and April’s) Community Round-Ups done as I can, though in the meantime I’ll try to post up some of my own stuff painted last month (in April). After a recent death in the family (not Dad), there’s a whole lot of stuff there to be sorted out, so blogging and compiling will happen at its own pace at a priority appropriate until I catch up. Still, that doesn’t mean that I won’t be painting or that I’m not happy for others to be participating in the challenges during this time…