It’s been quite some time since I’ve painted a Lord of the Rings model from the Citadel SBG ranges – so here’s one that I decided to assemble alongside the Minotaur Lord recently for the the Monster March painting challenge, and then finally got to painting for Monster MAYhem instead. 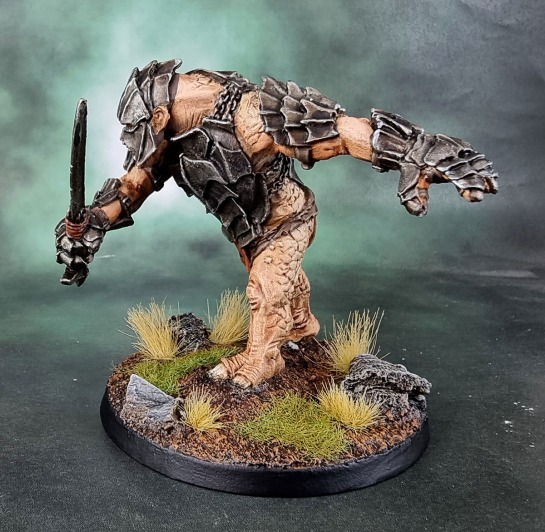 This is the metal version of the model, though I also have one in Finecast. As such, the thing didn’t lend itself very nicely to any form of conversion or modification, weighs a ton and was a real awkward bitch of a thing to paint. I may do something slightly more interesting with the Finecast one down the line, but that’ll be a different post for the future.

Painting was actually pretty quick and somewhat easy – going from assembled and sprayed to completed over three or four days – though very little enjoyment or fun was involved. Lots of drybrushing, washing (including thinned Contrasts) and a bit of normal brushwork. I might give a bit mroe effort to the finecast one down the line, but this one’s just not a particularly amazing model. Technically, the sculpting is fine – not flashy nor especially well detailed, though the armour is nice – but the awkward pose and weight of the model meant it was something I just wanted to get done and the fuck away from the painting desk. 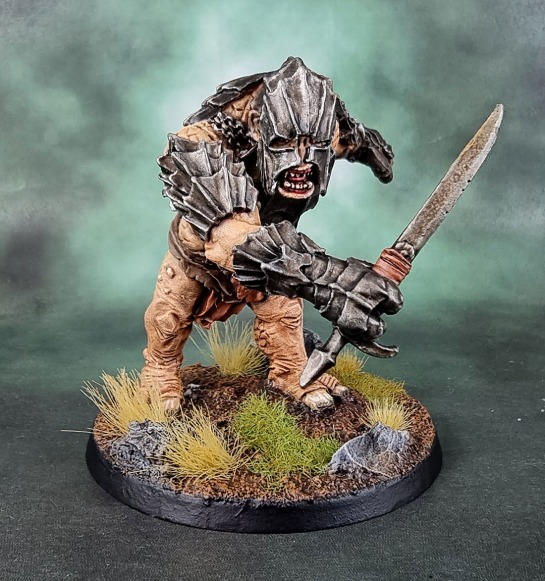 One good thing about all of this was that despite the model not being any fun to paint, the speed I managed to get the troll completed in means I don’t have a particular resentment to it either – and so once it’s on the shelf (and possibly one day, an actual wargame table) I’ll be just fine with it. Not every model can be a favourite, and even some of the big impressive ones aren’t going to be fun to paint, but even so they can be completely decent on the tabletop.

This is my final model for this year’s Monster MAYhem, though I’ll no doubt be finishing off the stragglers for another few months at least. There’ll be just another post with something else before the round-up this week(end) and then I’ll have my May painting round-up alongside my Monster MAYhem round-up.

Today we have a trio of figures that were actually painted awhile back – these were done for Orctober after the batch of Uruk-Hai Berserkers, but they were actually left inside the sealed tub of static grass/flock when I completed them …and then it appears that I entirely forgot about them! “Feral” Uruk-Hai appear to be a GW invention from their post-RotK series of releases, where they basically started making up a whole lot of different shit, vaguely based on the aesthetic of the films. 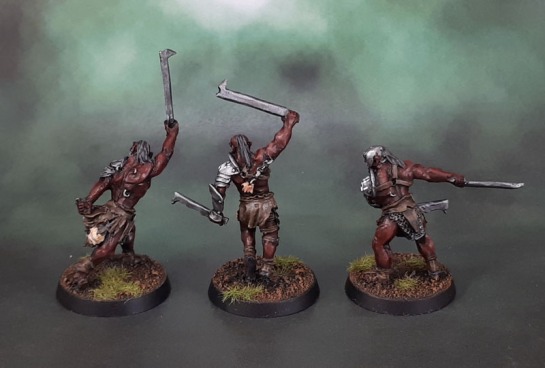 The palette for these Ferals is pretty much the same as the Berserkers. As with their brethren, there’s a lot of Uruk-flesh, accentuated by dark metal for their armour pieces and swords with a bit of chain and leather/cloth – and (once again) done! I also added some sexy Isengard handprints, and some Blood for the Blood God (aka Clear Red) to finish after varnishing. I only have the three of these, and with them not currently available (and AU prices!) I’m probably not likely to try chasing them down on eBay. They can fit in with the Berserkers as additional models, or in the instance that I want to run some Ferals, I’ll simply fill out the unit with some Berserkers.