Today I have some scatter terrain of sorts from the recent Boxed Kill Team expansion of “Pariah Nexus”. Truth be told these are pretty uninspiring little bits and I doubt I would even have gotten started on them if not for the fact that marouda and I decided to have a game of Assasinorum: Execution Force the other week. Having bought this particular Games Workshop boxed game back on release in 2015 for its intended purpose (discount model delivery system for the new plastic Assassin models), I’d never actually gotten around to playing it. In fact, while the Chaos Space Marines had actually been painted, the cultists had been put away in with other platic cultist sprues and the actual Assassins and Chaos Lord/Socreror frame had all been “lost” until I happened to find them by chance this week while cleaning up under the paint desk. 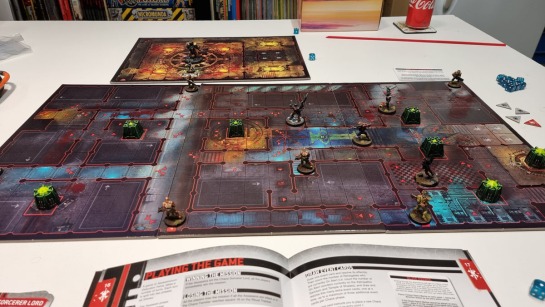 So it was metal Assassins, both completed and part-painted, Chaos Space Marines, A half-painted Iron Warrior hero in Terminator Armour, and a selection of metal Imperial/Chaos Cultists and WarZone Dark Legion zombified troopers who were selected. And with a “fuck this, I’m not reading new rules at 9pm, let’s go inside and play Far Cry for an hour and we can get back to this tomorrow night or the day after.” – that led me to select some bits that had broken loose from the Pariah nexus sprue to quickly paint to fill the red-square impassable space spots on the Execution Force board. if you’ve played Imperial Assault, you’ll know them well.

So with that, I quickly knocked out 7 or 8 of the single-square crates and barrels in an evening and part of a morning. Being of unlimited creativity, I followed the box art, since I would like them to fit in with the actual Pariah Nexus board, and even in these green tones they fit the board art of Execution Force pretty well. Since the first batch was pretty easy, I clipped a second bunch off a few days later and then also forced myself to knock them out as well. They’re pretty easy, but also pretty tedious to do. Mostly drybrushed, with the metal picked out and washed, and the crystals painted in VMC Ivory with Citadel Tesseract Glow over the top. That’s the newer Contrast paint that’s sold as part of their technical paint line so they can sell you a smaller pot of it.

I’ve got a few (17) more of these to go, and then there are four doors from the set. Then there’s another entire set of two sprues, so I’m still trying to decide if I should paint the second set identically, so they’re all one nice consistent set, or if I should paint the second set in copper-brass tones – which would basically match the “New” official GW Necron colour scheme – that coincidently is pretty much exactly how I’d always pictured painting my own Necrons instead of T-800-silver – but never got around to doing any.

Oh, and this is another set of model bits for Ann’s second annual “Paint the Crap You Already Own!” challenge…

I alluded to this model the other day – it was another one that Marouda chose for me to paint that had been sitting primed on my desk since …well, not too long after the Rogue Trader box was released two years ago. A nice, but extremely tiny model, I was able to get Axi done from start to finished over the course of about 24 hours, which is always nice. Of course, it still leaves the rest of the Rogue Trader Crew – and their opponents to paint, but you can’t have everything in a day. 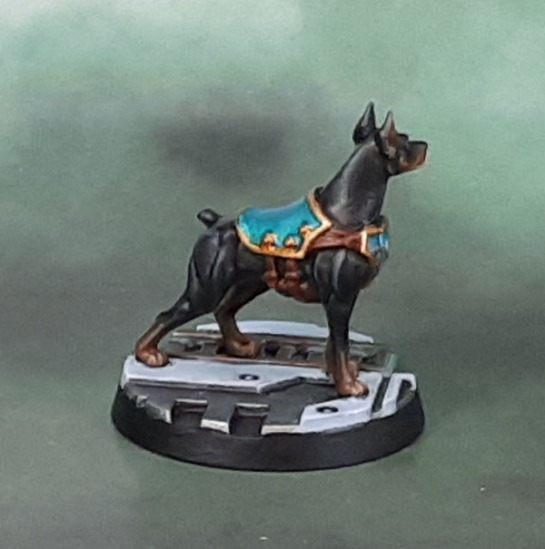 Personally, I’d love to see more of this sort of thing in miniatures, especially in 40k. We could use more doggoes and kitties.

As a little bonus, here’s the third of the models(? pieces? sculpts?) that Marouda chose for me to finish out of that first batch – along with the Slaaneshi champion, the Cultist – and before Aximillion. Basically, I repainted the two kitties on it to resemble Leonard (who is one of this blog’s mascots, and unfortunately much more of a Naughty Boy than a Good Boy with his predecessor and spiritual sister, Siousxie – better known to us over the years as “Little Girl” or “Lil’ Grill”. 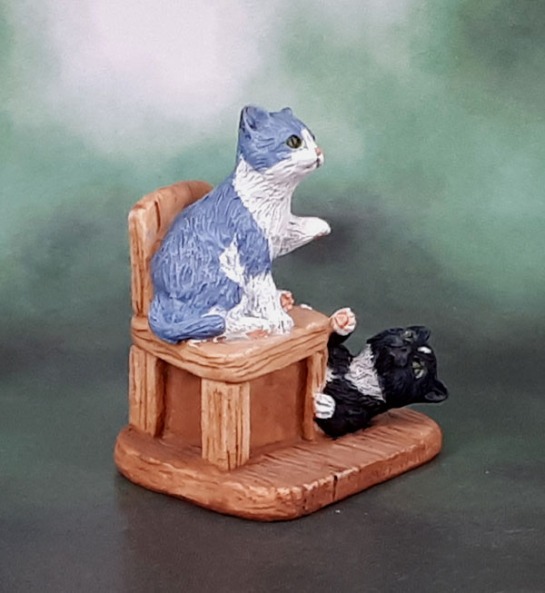 I’m not sure which of the two would be smarter, but she was definitely a lot tougher. So she gets the upper spot here. Lil’ Grill’s fur looks a fair bit more dirty here than it does in hand. Damn contrast “white” – but the more important thing is that it looks good in hand.