So now, on New Year’s Eve, 2020 I find myself posting up the first models I completed in November. Nothing too exciting to discuss here – another pair of models from the various D&D adventure board games. I went with milky, pupiless irises with a bit of a fade effect on the main/central eyeballs to suggest damage, and/or blindness. Because zombies. Then similar, “white” eyes, with a bit more of a bloody stain on the smaller eyeballs.

The differences between the paint on these two isn’t vast, but there is a little more to it in-hand than seems to have come up in the photos. One is a little more greenish, while the other is a bit more brownish, though both have use of the other’s primary colour as well as purple in the shading and of course, some bloody reds.

Here they are alongside their fellow ex-beholder mate from the same boxed set, the Death Tyrant. As with the Death Tyrant, the same sculpt is available as part of the Wizkids “Nolzur’s Marvelous Miniatures” line, albeit with removable/swappable eyestalks. Tarmor actually painted one of those not too long ago.

That’s it for me here in 2020. I’ll see you tomorrow (probably) in 2021. Happy New Year and all that – especially to those of you bunkered down and hunkered down across the world right now. Hopefully 2021 is better than the shitty year that 2020 has been! 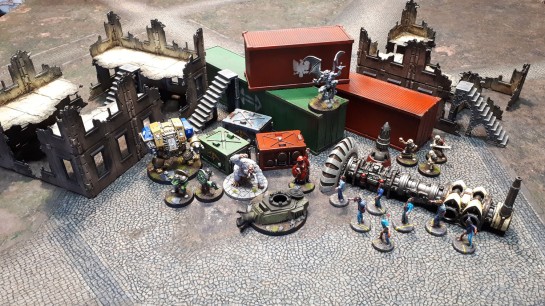 Hey all! Hoping that you had as good a Christmas as possible, and that most of you are at least able to have a bit of a rest this week before heading back to work soon and into what will hopefully be a better year than the dumpster fire in a shitstorm that was 2020.

Speaking for myself, I’m finally getting a bit of a break from 2020 now at the end of December, and so it’s time to post again while I have a bit of energy. I’ll get caught up on things (comments, other people’s posts, round-ups, my own posts) as and when I can. Today I’ll share what I finished in October. I only technically touched Orctober this year, but I guess I inadvertently managed to get a little bit of Zomtober-themed stuff done as well, though not nearly as much as in September (or, ironically, November). I did finally finish my Celestial Lions Dreadnought for Dreadtober, though! 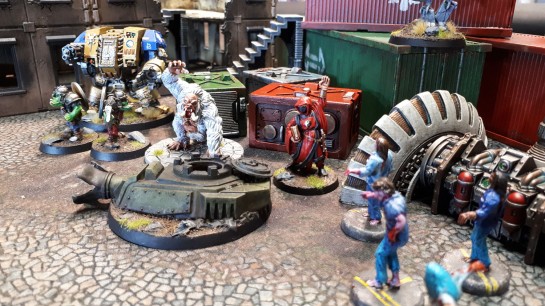 As with September, it’s dominated by scenery and board game models. Similarly to September, there were a couple of good reasons for both of those – the tail end of Dave’s Scenery challenge kept on rolling, and the fact that we were actually playing boardgames as opposed to miniatures wargames – and of course both are a little more forgiving when it comes to your concentration and focus not being at 100%. Yes, I recycled most of this paragraph from September’s post, since it also applies to October. 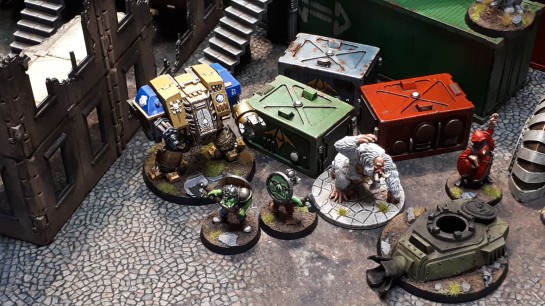 it was at least satisfying to complete that Dread, and those sci-fi crates, and the turret, and those ruined buildings. You know how it is when you’ve had stuff part-painted for a very long time and see it frequently (or simply when you start something and then have to see it in a base-coated condition constantly!) I started a large and (will be) impressive modular terrain project back around then that I stalled completely on while waiting for more parts, and now it’s just still in the way. Maybe I should try to finish it in January when not painting Space Marines or playing videogames… 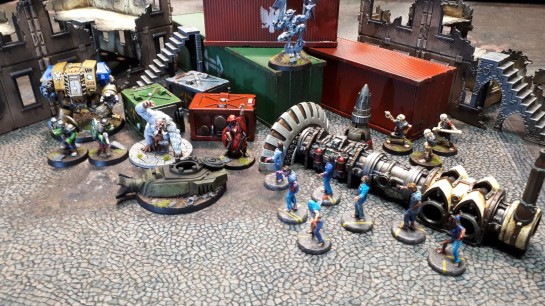 36 models completed in October, which just scrapes by my unofficial monthly target of a minimum of 1 model for each day (spoiler alert! I missed this in December!) So assuming I can still perform basic addition correctly, 36 models added to the 361 up to the end of September gives me 397, so I did at least beat my annual target of 365+.