Another piece of Sector Mechanicus Scenery today – another piece of the Alchomite Stack kit that I’ve previously built some pieces from. Though, honestly a lot of my early kits from these ranges are just a pile of sprues and bits in a box at this point! (and GW keeps recycling them into new “kits” such as the rest of the range, Kill Team and so on…

Anyway, this one was built some time ago – at the same time as the three completed ones linked above (and also the same time as the two more I haven’t started working on besides a prime and coat of silver spray!) So it’s been sitting in the shed for well over a year, pretty much ignored. On the heels of the Thermic Plasma Conduits (aka, PIPES) I finished the other day, I decided to work on this alongside the second set. So I could, y’know, link the pipes to some actual machinery. With that in mind, I’m going to wait until I’ve got a bit more assembled and painted and finished before doing another tabletop layout type pic of them.

I didn’t use the “crackle paint” method on this one that I did on the previous ones; instead trying a couple of new(ish) things with stippling, foam and thinned paint for much of the weathering. That’s the cool thing about industrial terrain – you can vary your methods and as long as it looks good, it doesn’t need to be entirely consistent from piece to piece since rust and industrial decay have many forms in the real world. And yes, it’s another piece for (and plug for) Dave Stone’s Winter of Scenery Challenge! 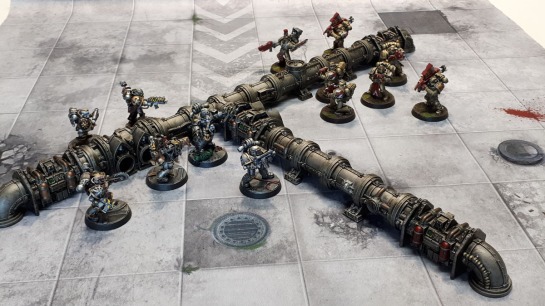 More scenery today – the first pieces from a set of Thermic Plasma Conduits, alongside the matching pieces from a Kill Team: Rogue Trader box. Aside from various personal issues going on, my work has been shut down for this week due to (at least) one positive COVID test. Thankfully I had no direct or even indirect contact with the individual, though one of my close colleagues did, so we’re hoping her test comes back negative. Without being flippant, there’s some stuff I can do remotely, but as it was an unforeseen shutdown and is only for a few days, for the most part it means I need to keep myself busy – and so more terrain is the way I’m trying to keep what’s left of my sanity. Along with Assassins Creed: Odyssey (I consistently get to these games 2 years late) and starting to watch The Witcher. Which is only …okay, so far.

As with so much of my stuff, I built these quite some time ago, sprayed them black, and these ones even had a (bad) spray of metallic applied. Before being forgotten and left in a box for months if not a couple of years. So now that I’m this current scenery kick, it was time to get them out and spend a couple of days working on them to get them finished to a level I’m happy with. So, well, that’s what I did.

This first batch is relatively small, only eight components. They’re from my first box of these before more became available later via additional terrain kits, Kill Team boxed kits and the like. I might have gotten some from Conquest Magazine as well? Basically, I was trying not to use all of  my first boxed set of pipes in case I wanted to do something more interesting with some of them later on. Now with addiitonal sets and parts, I’m not so worried about that – so as these drew closer to completion, I started working on a few more simple pipes from that first kit, and now I’ve found a second set worth of sprues in a box and have started assembling those with a (little) bit more variance.

For the time being I’ve kept the pipes to a relatively flexible and neutral metal tone. I do like the looks that rusted off-white and also dark red-painted pipes give, so perhaps a future set of two might look different. For the next two waves of these, I’ll stick with a compatable look to these, though. The actual pipe sections could fit in with some modern settings, as long as we don’t look too closely at them, though the segments with the servo-skulls wouldn’t fare so well. Unless that side of the panels was up against a wall, I guess. Otherwise they’ll work well in any sci-fi or many post-apoc settings, as well as (obviously) the Warhammer 40k universe. 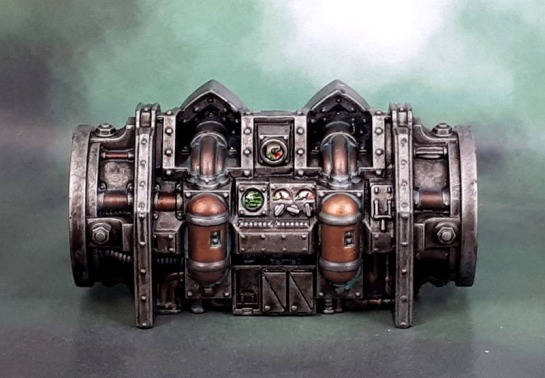 Doing all these dials was a bit of a pain, and I decided to use the rounded panel as a kind of “Aliens” or “Fallout”-inspired monitor screen, with light green text glowing on a dark green screen. As with almost all of my most recent posts, I’m also calling these finished models good for Dave Stone’s Winter of Scenery Challenge!

Thanks Dave for keeeping my motivation up!