It’s been awhile since I posted up any Nurgley Daemonic stuff, but a combination of making myself finish off things and Awesome August helped me to complete this ..erm ..guy?

This ugly creature is the Herald of Nurgle that comes alongside the Forge World Daemon Prince model, aka Mamon Transfigured. A figure that I actually managed to paint, early last year. It may have actually had it’s own name, and probably did, though that’s no doubt deep inside one of the older format Imperial Armour Forge World campaign books which appear to have become a thing of the past for a variety of reasons. (And a great shame, too!)

Now that it’s finished and I don’t have to deal with painting, nor compelting it, the Herald is once again a pretty cool model. A right pain in the arse to paint, though. Even though rusty, pus-covered Nurgle stuff should be a doddle to paint, this one was a bit tricksy, not helped by it’s off-balance feel (not the actual weight – it’s resin so weighs fuck-all). 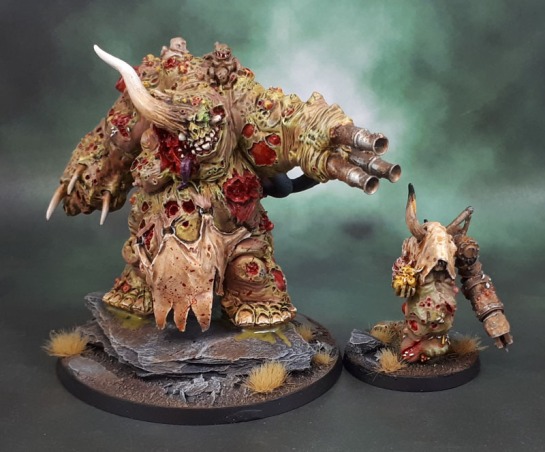 The Herald is actually a decent-sized model – that’s a 40mm round base it’s sitting on, though when placed next to Mamon (and especially Mamon-standing-on-rocks), it looks tiny by comparison. As you can see, I attempted to keep the colours somewhat similar – though it’s all still pretty in-keeping with all my Nurgle Daemon stuff…

The Herald is even carrying a couple of little pets – a pair of Nurglings! You can also see the usual Nurgle effects from this angle – open wounds, pustules, maggots, a slime trail.. all that good stuff.

Yeah, a fiddly model as far as the Nurgle stuff goes, as I said – but now finished, and while I still find the unbalanced narture of the sculpt, and how it makes the model sit on its base a little disconcerting, I’m happy with the completed product – so all good. Or good enough!

Today – Miniatures! Here’s the final three of my Plague Toads. This trio bringing me to nine painted ones. This batch being the “yellow” ones, following on from the “brown” ones and the “green” ones. And yeah, I know I need to do a new Nurgle army shot sometime soon.

Individual glamour shots of each of the three, though I skipped the profile and rear shots this time. Perhaps I went a bit conservative on the “glow” from their yellow-green eyes this time as well, but I think they still stand up decently. 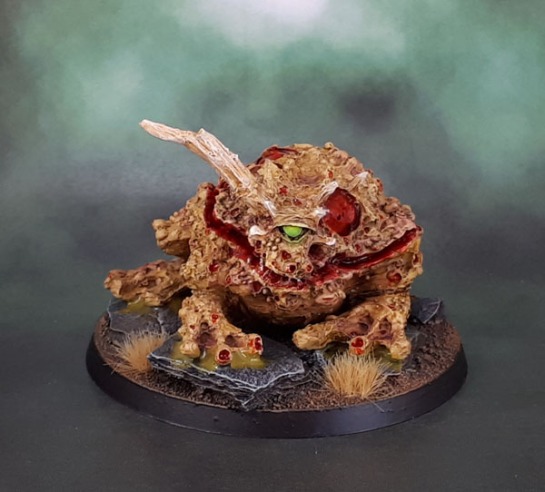 You can see what I mean about it it here. It’s there, but it’s subtle. Perhaps too subtle to stand out on the tabletop. 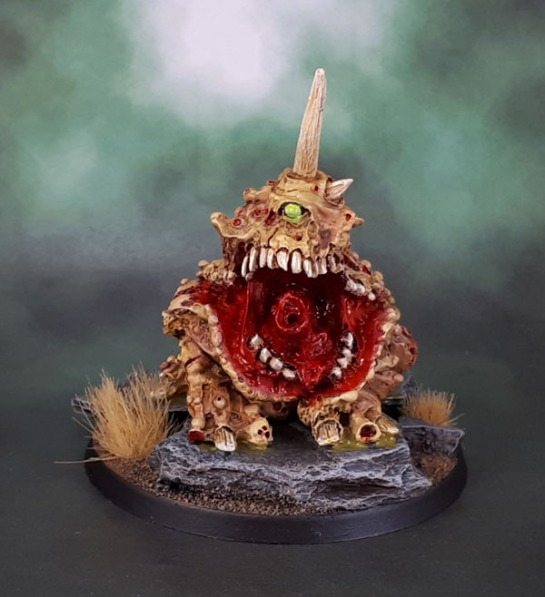 Ah well. I’m just happy to finally have the last* of these done finally!

The nine of them, with their colour coding can be used as three distinct units of three, or they can all be put together to make up a mega-sized unit of nine Plague Toads!

*of course, I didn’t say anything about Pox Riders!