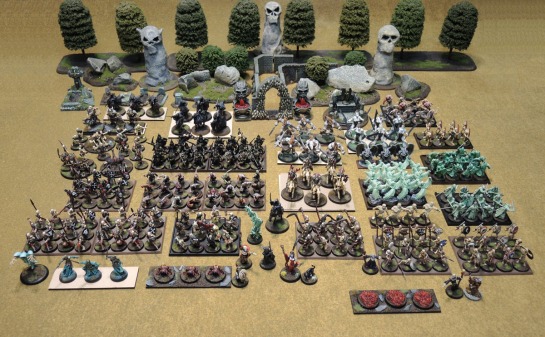 This is my second “State of the Army” post, this time showing off all of the completed elements of my (Marouda’s) Undead Army at present. Like the Gondor army, I’ve been working on it on and off over the last two or so years, with a recent push during the last 6 months and the painting challenge. I’ve kept Undead on as one of my main options for the second half of 2016, though I’ve opened up my options quite a bit as painting mostly Gondor and Undead got very old by the end. The Undead aren’t so bad though, as there’s actually quite a lot of variety in there, especially when you combine “Vampire Counts”, “Tomb Kings” and even the spectral elements of Lord of the Rings in general and Mordor specifically.

These photographs were taken during the same session as the Gondor Army and 6-month showcase photos, so there has been a little more movement on these undead since then, specifically the unit base I put together for the trio of Nazgûl. I held off publishing (and writing) this post until now as I could see three sets of army showcase posts in a row getting a little tedious. Besides, I wanted to share my Spehss Mahreens.

The Barrow-Wights in the front row need to have a new unit base built for them as Mantic first Squatted them in KoWII before a protest from players (and with myself as one of the first, if not the first in the departed Beta forums) caused them to be reinstated, though now they’re “Large Infantry” with 40mm bases. I’m not going to rebase my LotR SBG figures, so I’ll be making a – hopefully slightly interesting and imposing – multibase for them. My first failed attempt already sits abandoned on my painting desk. 😛 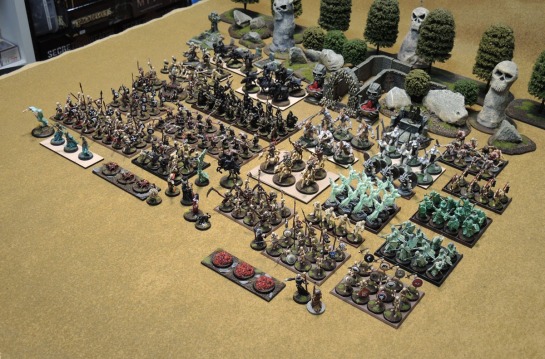 There are a few variables in here. The various Mordor and Army of the Dead/Oathbreaker models will (theoretically) be split off one day to one or two LotR-themed armies of their own, the two units of skeletons with Greek shields and the odd bit of linothorax armour will go into the Mythical Greek army, along with the pair of Brass/Bronze Bulls, units of Spartans, Talos, and more besides. Tomb Kings stuff, of which there is little to none right now will become it’s own force; and I’ve got a tub filled with Confrontation prepaint Wolfen, a miniscule 12 of whom are pictured here. Though there’s enough of those to happily stay in the Undead while also making up a Lycan-themed “The Herd” army of their own. Until those things begin to happen, though – they’re all combined to form a mighty undead army, led by Neferata (version 1).

There’s another couple of dozen troops (skeletons and zombies) on the paint desk right now, as well as a couple of more centrepiece-type models on the go. I’ll likely keep knocking out a few more undead units as I paint a variety of other things in the time between now and the New Year. 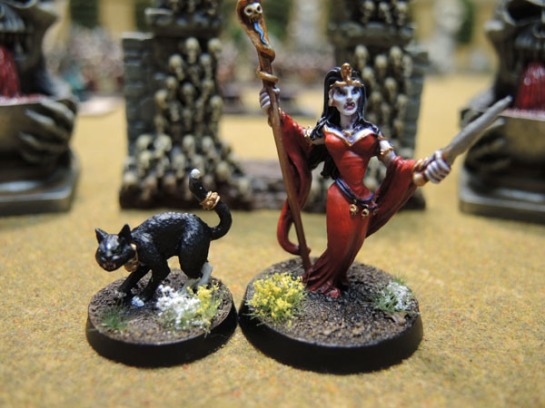 Marouda took a few photographs as well, managing to take a much better photograph of Neferata than I did when I posted her here – certainly in terms of her facial details not being nearly as washed out as in my own photos. I’m still learning my way around the new camera, but hopefully getting better!

There are a few not-quite-finished models in this photo. 6 Nazgûl (including a few named) and The Witch King. The Confrontation Wolfen also don’t have any paint on them aside from the retail pre-paint. You can also see some more candidates for scenic multibases besides the Wights. Hopefully between some of that and the centrepiece models I need to complete, I’ll be able to show this force off again at the end of the year in a more impressive light.

This is essentially a “State of the Army” post, showing off all of the completed elements of my Gondor Army at present, which I’ve been properly working on over the last two or so years, with a bigger focus during the last 6 months and the painting challenge that I keep harping on about. Models that aren’t yet completed are missing from the photos, so things like the Cavalry units that are part-painted will have to wait for an update down the line. While I don’t intend to buy any more Gondor models, with the possible exception of any new heroes that GW might release or the odd figure to “clean up” and finalise a more difficult unit (Men at Arms of Dol Amroth, Warriors of Arnor etc) I’ve got all of the models for this army in my possession. I just need to paint them!

The army is nominally set up as a Kings of War force, but obviously can be used in LotR SBG, or with a few tweaks in War of the Ring (those bloody bases!) We’ve even used a small number of them in SAGA. Most Minas Tirith/Gondor models generally aren’t very exciting at all as individuals, even with a decent amount of work put into them, but they do have a nice effect ranked up en masse.

I’m not up for a lot of typing right now, so I think I’ll go with more of a “show, don’t tell” for the rest of this post. 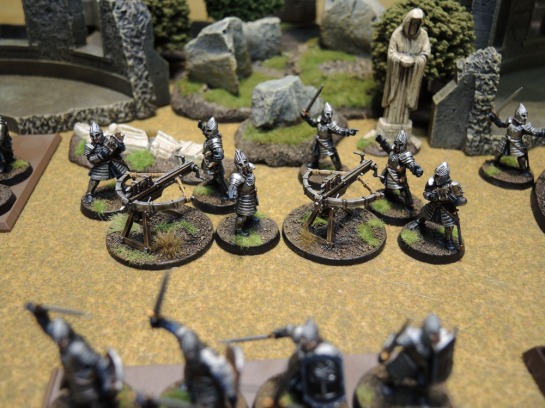 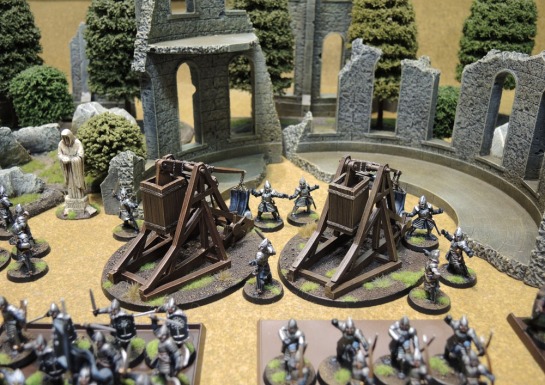