So the third part of my Kickstarter commentaries/bitching/ranting has been somewhat late. Work commitments have been fairly hefty in the last few weeks with the lead-up to Christmas, and I’ve also moved house, while also moving to another area at work. So moving boxes is my life at the moment, while writing in-depth posts is not.

So, half an update, and hopefully something better in a few days when I have my PC set up and don’t have to use a laptop…

Mantic/Kings of War have shown a bunch of newish sculpts – alternately for this game and for Dreadball. (aka Breadbowl).

Nothing new from Avatars of War (or maybe there is – but they don’t bother to inform their backers, so…)

Reaper showed a WIP of a huge Dracoliche (undead dragon) that looks somewhat out of proportion. US and Canadian backers have started getting toys. ROWers can still STFU and wait for the combined shipment.

Stonehaven’s Dwarves arrived a few days ago. I have the little box on my desk. Haven’t had a chance to look at them yet.

Tre’ Manor’s Red Box Games continue to have production problems with Trollcast. Looks like they’ll be shipping in January now. Mid-Jan? Depends how long the Trollforge guys and Tre’ take off for Christmas and New Year’s…

Studio Miniatures‘ Zombies. Well, apparently they were to have the last ones sent out by 10th December, before Stuart’s wedding. I got an email yesterday saying the last ones have been shipped. I understand they arrived at my mailing address today, so I haven’t had a chance to look at them and make sure it’s all there and proper with the right mix of civvies and Nazis.

Relic Knights by Soda Pop and CMON have shown a mix of nice and rubbish sculpts/renders. Still deciding what to do with the Pledge Manager there. Get the SDE stuff? Maybe?

Mantic’s Dreadball and Mongoose’s Judge Dredd have both had a fair whack of stuff show up – actually on time! More detail next time! 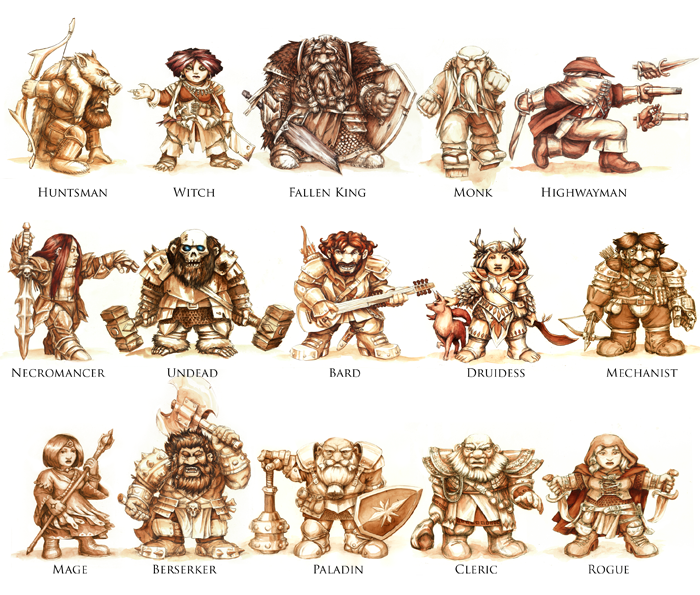 My Fifth Kickstarter was The Dwarven Adventurers set, by Stonehaven Miniatures.

I didn’t have any particular use for them, and don’t really FRP anymore, but I figures that they had character and could be subbed into games like Ravenloft, Descent etc quite easily as character figures. I also have a bit of a soft spot for Dwarves. This one was also due in October, and now we’re hitting December. Regular updates though, have kept me mollified, though the dwarven sculpts are turning out less fine-featured than I’d like. This being an early KS of mine got in due to the “gee whiz” factor. I’ve passed up on several similar projects since then, since I figure I don’t really need to be throwing $50 or $100 at every reasonable set of fantasy figures that come along when I could just buy them off the shelf a la carte from the many manufacturers already out there. These guys haven’t done anything “wrong” really, but I probably wouldn’t go for it again. These little random projects add up over time ($$$).

Still, it was supposed to be in hand during October, and it’s now December. Will it be here by Christmas? Who can tell?

I went in for this since it was small and cheap, pirates are reasonably cool, but most importantly, these were getting sculpted by Kev Adams. Like so many of the other projects, this one trundled along with a few updates after the money went in, then got deathly quiet a month ago. Bruno didn’t respond to any of my emails wanting to add another goblin to the order over a six-week period, until a week ago when I sent him another email he did reply to. Promising to send me a PayPal invoice the next day and also update the project (after a month of having gone quiet). Neither has happened. He’s got a nice concept pic up for Dwarf Pirates, which he wants to run as the next project. If it’s small and cheap like this one was, we’ll see. If he gets ambitious and wants to make it bigger and more expensive, then no fucking way.

Oh yeah, this one was supposed to be in hand during October as well. Will it be here by Christmas? Again. Who can tell? I doubt it, though. 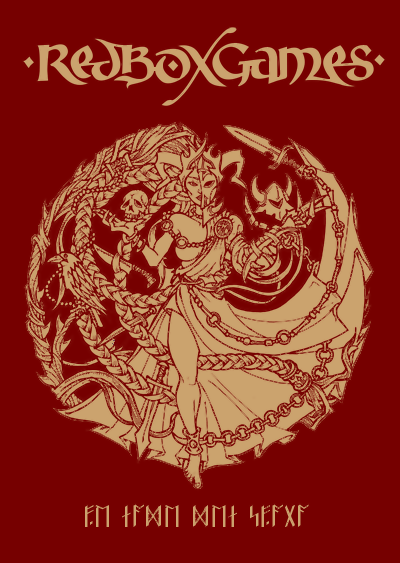 I like Tre’. I’ve interacted with him on a few forums as well as directly. I’ve bought figures from him as well, and reviewed them on this blog. He’s one of the few I link to on the sidebar there. I went in for more than I really should have and got a bunch of figures I really don’t need, because I like the guy. Tre has been great with regular updates, sculpt previews and taking feedback on them. Once again though, the project has been hit by a number of delays. The one thing I didn’t like was that Tre’ (at one point) was pretty adamant about starting a new campaign in the Middle of November. This actually did piss me off, since I’m of the mind and attitude that people really need to finish delivering on their prior commitments before coming back to the till with their hand out. Tre’s rationale was that he was worried about KS fatigue setting in and also booking in Ed from Trollcast to produce the models as Ed is getting much busier lately. I continued to disagree and also thought that finishing a KS 2 weeks before Christmas would lose out on a lot of potential pledges. Some agreed with me, while others didn’t. Luckily (!?) the production delays seem to have put a stopper on that idea, so I’ll be more than happy to support his next KS.

Oh yeah, timelines. Again this one was supposed to be in hand during October and is looking unlikely to be here by Christmas…

Nice models – a little plain in the details but you make up for that in the paint. The campaign was a little long, and suffered from Indiegogo’s “we charge you immediately” aspect which just puts me off campaigns hosted there. Once again, we had a few updates post-completion, and then it went dark again (last update almost a month ago). Stuart has reappeared in the comments section (which I only saw because I saw typing this up) to say that he thinks everything will be shipped by this coming Monday so people will get them before Christmas and then he’s closing the shop for a few days to get married. Best wishes, Stuart. Would I go in again? Maybe. Zombies are a bit of a niche thing, and that’s all Studio Miniatures really do. The IGG campaign didn’t hit enough money to make the femzombies a go. But then again, how many do you need? I went in for 80 regular zombies and 80 Nazi Zombies. (plus the few metal/resin extras).

Timeline? Indiegogo’s page works differently to Kickstarter’s, so I can’t find the initial due date for these. I’m sure they’re a month or two late though, like everything else on this page. People have started to report getting theirs, so that’s something. 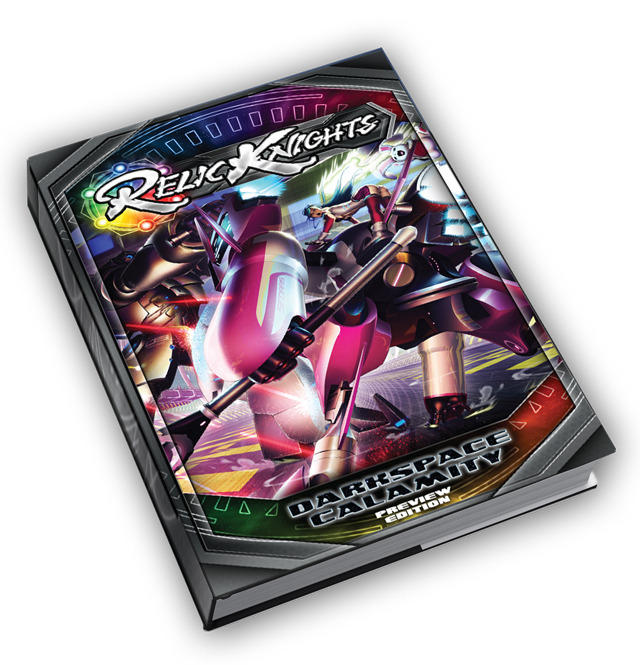 Ninth. Relic Knights by Soda Pop Games and Cool Mini Or Not.

I thought this campaign was run appallingly. Poor quality updates, a lack of figure shots. Figures that don’t look anything like the artwork. I was originally in for one of the larger “Early Bird” sets, but dropped down to a minimal level in the end. I might get whatever the “Super Dungeon Explore” pack works out to be, maybe. I like the look of the Noh figures, and also Black Diamond, but since this one has gone completely dark with no updates or sculpt previews etc, I probably won’t get that SOTU + SDE set. This campaign and the way it was run (as well as Sedition Wars) put me off going in for any more of CMON’s Kickstarters.

Projected delivery date is May. I wouldn’t bet money on it, though.

So, out of the five projects on this page. Some people (not me) have gotten some zombies. One has months before they’re due, and the other three are over a month late. I might get my zombies by Christmas, if I’m lucky.

One has part delivered if you’re in the US (late) – and if you’re out of the US they’ve decided to combine your September 2012 stuff to ship several months later in 2013 instead. In four months from now. If there are no more delays. Which will mean the Sophie sets get delivered 7 months later then initially promised. (Reaper)

Four are over a month late (Sedition Wars, Goblins, Dwarves, Zombies) One is starting to ship (Zombies), and one is definitely post-Christmas and also looking to have their March tier be late as well (Sedition Wars)

One never gave a date, and it’s probably just as well (Avatars of War)

I’ve gotten 10 dice, 2 rulebooks, and a Miniatures bag to show for my Kickstarting. All from Mantic.