So, yeah. I’ve not been especially thrilled with the way that most of the over-a-dozen Kickstarters I’ve backed so far have gone so far. I haven’t said much about them on this blog to date, because, frankly, I don’t really want to be an advertisement, nor have I been actually updating the blog much as of late.

So, Kickstarters. I’ll share my experiences to date as well as opinions. I have to play nice on forums, but here I can freely speak my mind. Which actually doesn’t mean being a complete arsehole. 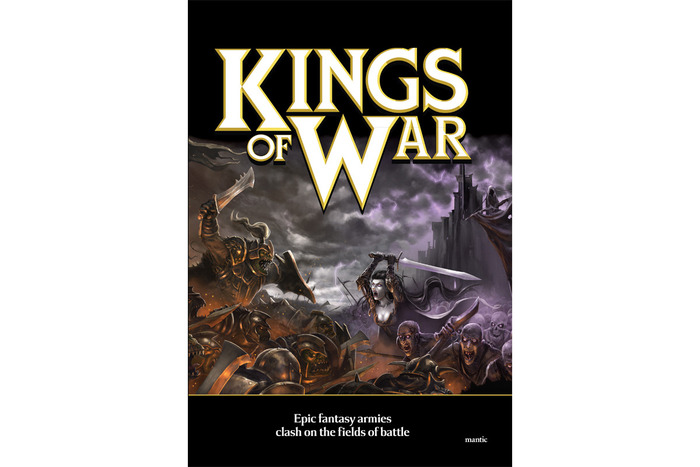 My first one (missed out on Zombiecide by *that* much) was Kings of War, by Mantic Games. Since I felt that many of their fantasy sculpts of the time frankly sucked or were rather uninspiring, my wife and I went in for mostly new sculpts, based on a lot of faith/hope and a lot of BOGOF value. We did each get our rulebooks and dice, as well as a Mantic/Battlefoam bag, which is quite decent, but everything else from them is due in 2013. A couple sculpts previewed look less than impressive (Female Vamp) while most others look quite nice. No problems so far. Regular updates and regular pictures of WIP greens, so no problems with Post-KS communication. Would probably KS with them again. (In fact, I did!)

Second/At the same time was Sedition Wars, by McVey Studios. (Mike and Ali McVey). Again, lots of value on offer, and McVey’s reputation was quite good. The Chinese printer running off with the funds isn’t Mike’s fault, but I’ve been solidly unimpressed with the lack of updates over such a long time until recently. I know Mike and Aly were moving, etc.. but you know what? My telephone has internet access and a post takes 5 minutes of your time. So I’m not as easily mollified as many others on the internet. If SW hadn’t chalked up close to a million bucks, I might be able to swallow the reasons on lack of comms more easily. But for fuck’s sake. Mike, people gave you a million dollars. Amazon and CMON taking a chunk notwithstanding. They gave it to you. There’s simply no fucking good excuse for the length of time that your communication went dark. Even if CMON are being dicks with the updates, you have your own forum! (And yes, I realise that Mike will never actually read this.) :p

I’m also not terribly impressed now that I’m hearing rumblings that the second wave will probably be delayed because he wants the sculptors to work on the expansion as well at the same time, and so has to “juggle” between new things for the expansion and shit people paid for in full months ago. Another slightly-nicer-phrased version case of “We already got your money, so STFU and you’ll get your stuff when we send it.” Let’s also be realistic. The March stuff is going to slip. Mike is laying down the “it might slip” line now, months before, so that by the time March comes, everyone is used to the idea that it’ll come in May or whenever.

So anyway. the Nov stuff is clearly not going to be here until Jan-Feb, and while disappointing, I can understand it. The March stuff shipping to April, May, June. Not quite so OK with that if it happens. (Especially since the KS finished on July 1st) Would maybe back another McVey Kickstarter if it offered insane value again, but CMON and their lack of updates don’t impress me at all. Doesn’t look like it’ll be an issue since the SW expansion appears to be going direct to retail.

Third was Avatars of War‘s Indiegogo. Since Felix thought offering any kind of decent value compared to retail on what is essentially an interest-free loan/investment, and also has a frankly horrible track record on delivering on pre-orders, I had to sit out on most of this, despite him being an incredibly talented sculptor. Went in for a Limited edition standard bearer, since it was such a small investment ($15) that I can’t see myself getting too bent out of shape if he takes a year to deliver on it. Which he probably will. Mostly a shame, since I’d have loved to drop a ton of money on it. it just lacked the value for the investment, and the ability to trust Felix to deliver. I’ll probably buy a bunch of these figures once they hit retail. And I don’t even play Dwarves. Rarely bothers to update to his backers using IGG. Instead you have to go looking on Facebook, or the AoW forums, or the Spanish-Language AoW forums. Fuck that noise.

If/when Felix offers another IGG, I’d probably just go in for the equivalent of the standard bearer unless they lifted their game and attitude dramatically. And that ain’t gonna happen. 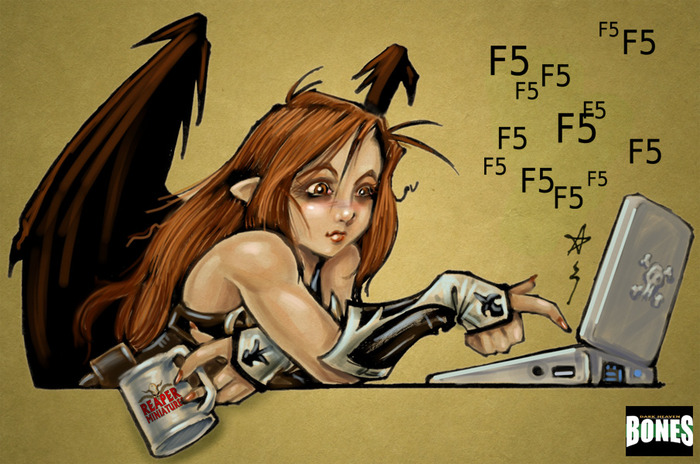 Forth, the big one. Reaper‘s Bones Kickstarter. Well, being located overseas has now meant that they’re decided that they’re not going to ship the segments of my order as they’re ready (Sophies, Paint, Models) but are going to ship all my shit all together at once. Except, well, it won’t all fit in one box, anyway. So no Sophies shipped when they said they would initially (which is annoying) or paint which is somewhat understandable given the dropper bottle situation, except non-US paint orders have been tossed to the back of the queue regardless. While it’d have been quite nice to get my Sophie sets now (especially since my US-based friends are talking about having gotten theirs) I’m not as pissed off as I thought I might be. (Doesn’t the initial September delivery date look quaint now?) I’m also getting a metric fuckton of stuff from them, and I trust them, so I’m ok with them saving a bit on the shipping and sending it all at once. Hopefully it does turn up in March though. Or April.After that, I’ll start getting a bit annoyed. Funny thing – on reflection, I might have been massively fucked off with Reaper, but since they’ve been posting regular updates, I’m pretty much fine with them and the delays.

Still, Reaper have always had great CS for issues my figures have had, on a par with Games Workshop’s deservedly-vaunted CS, and more importantly, they’re giving us regular updates with sculpts and so forth. Would back again if things keep going the way they have. I doubt we’ll see anything as crazy as their KS again, though.

So, out of the first four crowdfunding projects I backed, three initially projected to have stuff in hand to me by now and only one has actually shipped me some stuff and is on track to meet their stated timeline. Two have slipped, with one threatening to slip on the second wave as well. And who the fuck knows what’s happening with AoW? For about $2k spent on this page, I have 10 dice, 2 rulebooks, and a Miniatures bag to show for my Kickstarting.

I’m happy with Mantic, in two minds on McVey, unhappy with CMON, ok with Reaper and, well. I have no expectations for AoW, so it’s hard to be dissapoint!