So here we are. Wrapping up the second time this challenge has been a thing, and the first time I’ve invited others to participate if they so wish. There was triumph, tragedy, we laughed, we cried, there were tears, and fears. And possibly someone listened to Tears for Fears at some point. I’d hoped to complete the 1996 Great Unclean One as well as one (or two) Forge World Nurgle Daemon Princes, and maybe a Herald of Nurgle, maybe the Original Great Unclean One, and possibly even finish Be’lakor and the Marauder Giant that still languish on my desk and shelf, unfinished from the previous Painting December of 2015. HA!

I did get the ’96 GUO finished, and Mamon, Daemon Prince and the Original GUO are both close enough that they will be complete very shortly. Probably later today for the original GUO, in fact – and hopefully by tomorrow night for Mamon. (I’m typing this on Saturday.)

Wudugast from Convert or Die completed his Skaven Screaming Bell.

The 28th Scribe completed Grymdraig from Mierce Miniatures. A nice subtle use of brass and verdigris on the torso add interest and detail to the completed model.

Alex from Leadbaloony converted and painted a personalised version of Arkhan the Black, using a combination of Grenadier’s old-school Death Dragon, and old Citadel Skeleton Cavalry model, and a few spectral undead models for the basing.

Dave Kay from Scent of a Gamer completed Goremaw, a huge model from Reaper’s Bones line. I’ve been working on getting my own Goremaw assembled after seeing his completed one!

Archer from Dakka completed his Necron Monolith.  He’s gone for a sandstone-and-metal look which has come up really very nicely. More photos are buried at the bottom of his gigantic post.

Joshinjapan from Dakka completed what I last time called an inspirational job on Great Cthulhu from Reaper Bones. Somuch so, that I’ve been looking for the same paints that he used locally (with little luck, so far).

Zergsmasher, also from Dakka, smashed out a great Mortarion. All those fiddly details!

Last finished model to show, but very much not least is Imperial Rebel Ork’s fantastic Ogre/Ogor Mournfang Stonehorn and rider.

There were a few non-completions – both shared online and not, but hopefully those figures will now be well on their way to being done. And there’s no reason they can’t be used as content for any future painting challenges, either here or elsewhere if it comes to it. Anything that helps motivate us to get more stuff done is a good thing, after all. 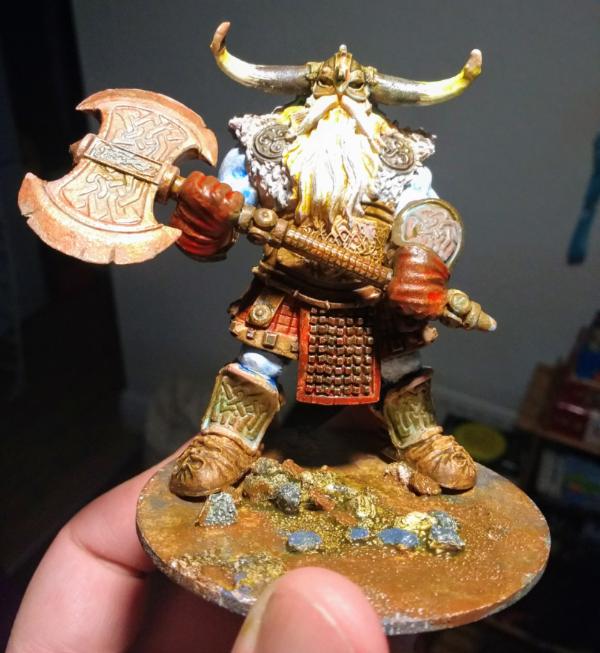 Ian Sturrock is close to completion on his Bones Frost Giants. Having been interrupted by a house move, he just needs to find everything (because packing) to drive them to final completion.

Ann from Ann’s Imperium‘s work on Foetid Bloat-Drone “Becky the Bloater” appears to have stalled out at the end of January. I’ve heard that Becky might make a reappearance as part of Leadballoony Alex’s Fembruary Challenge.

Thomas of High Times on the Eastern Fringe was working on a Khorne Lord of Skulls. He appears to have been distracted by the schemes of Tzeentch, however. Hopefully one day Khorne’s big mechanical champion shall arise!

Today we have another update to the Decembuary project for this year. The amazing work just continues to flow here!

Imperial Rebel Ork aka IRO has completed his impressive project of a converted Ogre/Ogor/Mournfang Stonehorn. Who’s a hungry boy, then?

I call the big one “Bitey”.

Alex from Leadbaloony has completed his custom Arkhan the Black. Amazing OSL on show here!

Speaking of hungry, this one looks positively famished!

Ann from Ann’s Imperium has continued to work on her (in)famous Foetid Bloat-Drone “Becky the Bloater”. I’m loving that mottled green.

Tinpotrevolutionary ‘s Iron Eagles Space Marine Dreadnought has started to have the details filled in. The Brass really pops against the grey.

The 28th Scribe has updated on his progress with Grymdraig from Mierce Miniatures. The armour and skin are looking great here.

Archer from Dakka was involved from the challenge (presumably) from the start, but I couldn’t find his pictures because post me a link if you’re joining in a challenge I’m compiling, dammit. Ahem. A Necron Monolith in it’s early stages (as of last posting, anyway)

Time for some space pyramids.

I’ve put the Forge World Daemon Prince to one side for the time being in order to concentrate on the metal Great Unclean One. I’ll put up an actual update post of my own in the next day or three, but here’s a current pic snapped a few minutes ago.

Like myself for most of this challenge, a few participants haven’t posted an update since the last round-up, though I’m sure that painting continues feverishly behind the scenes. 😉

Thomas of High Times on the Eastern Fringe has been working on a Khorne Lord of Skulls.

Wudugast from Convert or Die has been working on a Skaven Screaming Bell as a worthy cap to his Year of the Rat project.

And the gallery of previously-completed work:

Over on Dakka, Joshinjapan did an inspirational job on Great Cthulhu from Reaper Bones.

If all goes to plan, I’ll do another round-up next weekend followed by a final wrap-up late next week.