Here’s the next of the Mark Copplestone series of Chaos Warrior-Champions from The Lost and the Damned-era.

Once again, this guy was painted back in the 1990’s but needed a little bit of touching up. He’d gathered some dust and such over the years, so he needed a cleaning scrub with a toothbrush and soap(!) to get the stuff off. I highlighted the brass of his armour, and also added a tint of green to it. I also touched up the bone on his horns and skull-pommel which were originally painted with the “base coat-and-ink glaze: done!” method. 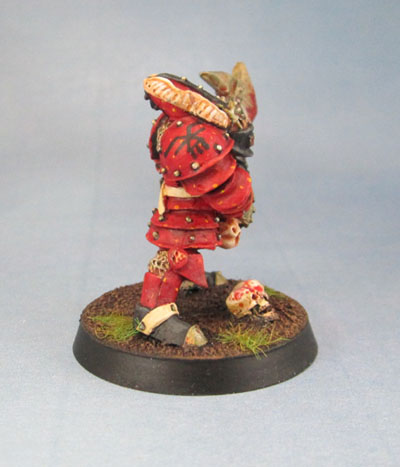 A view of the Skull Rune of Khorne.

All of the finer details around the slightly unknown release dates and such of the figures in this series are in the previous post that showed the Slaanesh Champion. Like the Slaanesh model, I rebased this guy to a 32mm round, which he actually fits on as he had some pretty bad overhang on the 25mm square that he used to reside on. I added the simple freehand Skull Rune of Khorne to his right shoulder. While I do like the newer models and  even like the AoS models, but there’s something to be said for models that leave a nice amount of flat space that allow some freehand work.

While fixing this guy up and handling him, I started to notice just how much his armour reminded me of the “feel” of samurai armour. Not an exact copy by any means, but the pose and overall shape. I’m sure the mask appearance helps as well. It’s a subtler influence, but I think it works well for this figure from the days before Khorne was only about bloodlusting berserkers – the “warrior code” was also a big thing for Khorne back then. As much about blood and marital honour as blood and berserk rage.

Generally speaking, I’m not a huge fan of adding blood and gore to models. Used sparingly, they can be quite effective, but too often a model just ends up spattered with the stuff, or way too many models are covered in it. As can be seen here, I’ve added some to his axe, and also to the pair of skulls at his feet. Hopefully it looks effective without being over the top. 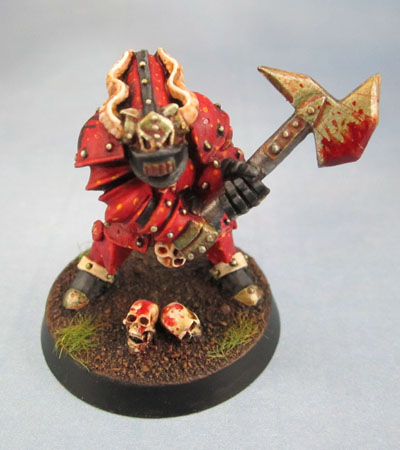 A view from a higher angle.

A slightly better view of his offerings to Khorne – a pair of blood-spattered skulls. The BFTBG paint looks a little flat in these photos, but in real life it looks suitably shiny and glistening.

It turns out I never started painting the Tzeentch or Nurgle models in this series of Warrior-Champions, or the other Khorne guy I found while looking through my figure boxes. I’ll hopefully get those painted up as palette cleansers in the next couple of months and then finally be able to show them all off together. Wish me luck!

8 thoughts on “Realm of Chaos: Warrior-Champion of Khorne”