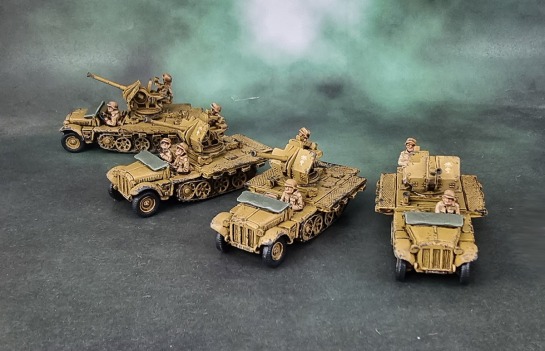 The next little set of models for my Afrika Korps fit very much in the support role. A platoon of Sd Kfz 10/4 – halftrack mounted light Anti-Aircraft flak guns. This kit is actually the “Late War” version, as I was unable to get hold of the Mid War version, sold in both DAK and “Grey” boxes with identical contents for some reason. There’s a slight difference to both the gun model, the gun shield and the seating arrangement in these earlier versions, but I’m not about to get too fussed over a difference that small, and anyone who wants to get upset and count the rivets is welcome to count how many fingers I’m holding up. 🙂

Painting was again pretty straightforward – For these, I just followed my established methods of painting DAK armour, and then eventually when I got to the crew, painted them in the same manner of my Flak88 crew – basically in their Luftwaffe Uniforms. I marked the command model by adding in an extra model with binoculars to the passenger seat of one of the halftracks to represent an Unteroffizer or other NCO. 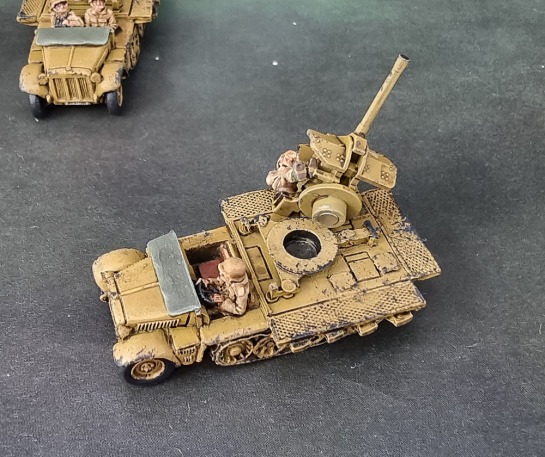 I did however run into a particularly painful issue – the vehicles are resin with metal tracks and wheels, the crew are metal, but the guns are plastic – this means that the guns end up looking like the one in the image above, unless you do what I did in the image above – and that’s to magnetise the bloody things so they stay down! My initial plan was to use metal ball bearings in the guns and magnets in the chassis – the theory that the bearings would add weight while also being attracted to the magnets. 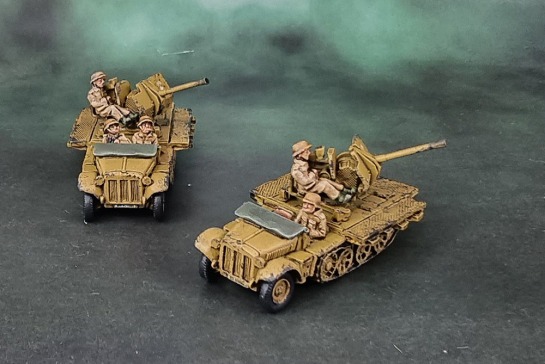 That did not work, unfortunately, and the bearings supposedly sent by the seller from eBay took more than a month to never actually arrive, despite them supposedly being in located in Sydney (a couple of days for the post, at most). So then I ordered another set from another place here in Melb, only to find that they didn’t work, and then to remember that I had some really bloody small rare earth magnets ….somewhere.

In the end they worked out, I guess. Now I need to decide on whether or not to also build the ground mounts that these guns can also slot onto (and paint the crew!) – they can be used in a DAK list as Fallschirmjaeger allies, so… maybe?

So I was thinking to myself, I’ve been painting way too many Middle-Earth and Fantasy models lately. I really need to get back to the 15mm WWII stuff before Kuribo loses patience with this blog completely. So with that, a couple of weeks ago I got started on two boxes of German stuff that I’d wanted to get done for a few months now. The first one of those boxes was this one – a platoon of Marder III artillery pieces for my Afrika Korps force.

These weren’t too bad to paint – the biggest issue actually being all of the crewmen, since I really don’t enjoy painting 15mm infantry models.

When I was almost done, I realised that I’d not added any additional stowage to any of these kits, and that all four crews were identical. I passed on adding any stowage, but did pry off the gunner of the lead Marder to replace him with a spare (metal) standing artillery crewman, just to help distinguish the lead model a little more easily that squinting at the numbers on the sides of the models’ hulls.

And that’s pretty much it. The other kit I started alongside have turned out to have an unforeseen issue, so I’m waiting on an ebay purchase of some teeny-tiny ball bearings to rectify the problem, so I’ll get those finished up whenever my small balls arrive in the post!