More Dungeons and Dragons Boardgame models today. The Wraiths and Blazing Skeletons. Both of these sculpts come in transparent blue plastic, so painting them is a little different.

You really don’t want to be undercoating these if you want to retain the semi-transparent look. I gave both of them a bit of a wash with dark blue ink in order to deepen the shadows, which has worked in one way and not been so great in another, as they have lost a certain amount of their transparency by doing so. The Blazing Skeletons are pretty nice models, actually – the only really “difficult” part being how the fireball is indistinct from the rest of the flames happening on the model.

The Wraiths aren’t bad models either. A little ham-handed perhaps, but that’s hardly a new thing to miniatures. Simple enough, but overall quite effective. 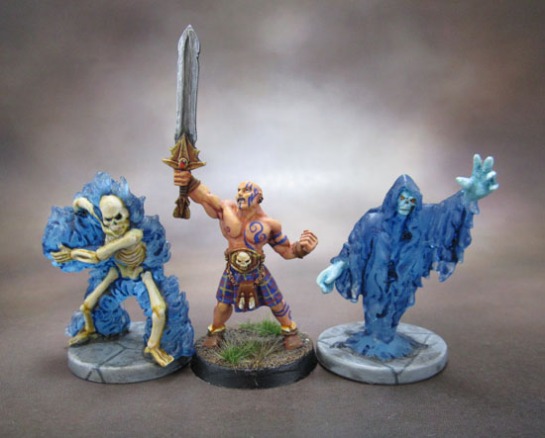 Size Comparison with The Usual Suspect

Obviously, the place for these figures to get more use would be in the Undead Army. What to use them for on the other hand is a little trickier. The wraiths would obviously see most approrriate use as Wraiths, but that role is more than competently taken care of both by the reams of Army of the Dead models from LotR as well as the old Citadel Spirit Host (Ghost Swarm) models that I repainted last year. Smaller numbers have any number of very nice models in LotR Barrow-Wights, Otherworld Miniatures’ Wights and the like. Perhaps if the AotD get split off into a separate Army of the Necromancer or something. I dunno. Suggestions on near-term use for those models would always be welcome.

The Blazing Skeletons have a similar problem – what to use them for? If I were really lazy or creative, I could try suggesting that they’re stand-ins for War Machines. What with the huge blue fireballs they’re about to Ha-dou-ken at their enemies. Thing is of course, that I already have some Undead Warmachines (and two more Skull Chuckers to sort out, and a TK Screaming Skull on the radar.)

So, I dunno. Smush them in with Undead Archers since they’re all ranged? Seems a bit ill-fitting somehow. Use them as Undead Characters/casters? While that could work ont he surface, these models don’t look like interesting characters, and Undead Characters seems to be one of the most heavily-populated subgenres of miniatures available – both from older metal collections like my Citadel stuff as well as endless newer models from Reaper, Bones, etc.