Today we have something that’s somewhat recent and still available. Six Black Númenórean Warriors from Citadel’s Lord of the Rings range. I don’t recall when these were released exactly, but the slotta says 07 so it would have been either 2007 or 2008 most likely. These models are exceptions to the “no starting anything new” rule I’ve got in place, as the “stuff I can paint 90% of at work” rules overrides the former rule.

As I’ve noted before, a limited palette and a simple job to do (usually highlighting black cloth or painting bone) works well for me at work, and keeps me interested in the hobby when I’d otherwise be tired and (more) burnt out. 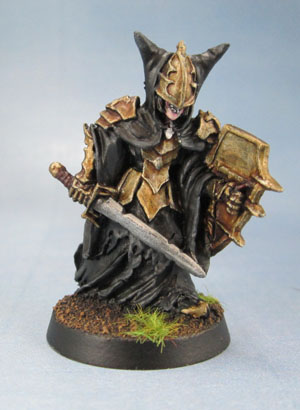 I wanted to paint these in a slightly more interesting (to me) manner than the usual, which is essentially dirtied-up steel with black robes, but still retain the proper feel of these Morgul troops. I’ve seen some really nice looking Morgul Knights (these guys on horses, basically) painted with deep sea green robes, but I wanted to maintain stronger visual ties through their palette being in tune with both the Ringwraiths and also (and more importantly) The Mouth of Sauron figure.

I kept the dark robes, highlighted via blending rather than drybrushing which I’ve used in the past for similar models. Sadly the highlighting seems to be a bit washed out in these pictures, but something I absolutely wanted to avoid was over-highlighting the robes to light grey or white, which seems to be a common solution for many painters – because the robes are black. I used my usual black palette, of blends between Army Painter Black and VMC – Black Grey and Basalt Grey. Basalt Grey is plenty light enough for these guys. 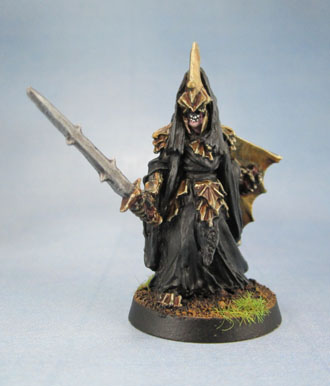 For the metal areas, I tried a new technique. First I painted the armour and shields with Vallejo Chainmail undercoat with a little bit of VMA Bright Brass mixed in. Two glazes of Citadel Seaphim Sepia Shade, and then an edge highlight of VMA Gold. Sword blades were done with Army Painter Plate Mail, washed with AP Dark Tone, and then edge highlighted with Plate Mail again.

Faces were done with VMC Sand, shaded with a paint wash of Fire Dragon Crimson, which is a very old Citadel paint that’s actually a purple shade and then touched up with sand. A bit of black around their mouths and teeth picked out with VGC Elfic Flesh. Leather on the sword handles and shield straps were done with AP Chaotic Red (which is more of a deep red-brown) and washed with AP Strongtone. Done!

The reason I’ve documented exactly how I painted them here is because I’ve found that I have literally a dozen more of these guys, as well as a single pair of Castellans of Dol Guldur, who may well get the same paint scheme, given how similar they are in look and feel, and to add more variety to the scant three poses that the Black Númenóreans have.

As you can see, I attempted some minor conversion with these initial six when I got them years ago. I clipped some shoulder spikes from one of the models, and turned one of those spikes into a “rear” headspike on one of the other models. Without going into Chaos Warrior-style spikiness, I’m not sure how I can easily add any differentiation to the dozen others I have of these three sculpts. I’m not willing to go so far as to resculpt parts, and these models aren’t exactly conducive to headswaps, so there’s probably not a lot going to happen here.

The eventual Army of Mordor will find a home both in the various LotR games, as well as Kings of War. Plenty more to paint before I worry too much about that, though… Perhaps these guys will find their way onto the table alongside Marouda’s Undead army as Allied troops.

Nope, not the new Prodos models. I almost went big on their KS during the PM phase, but I asked them a couple of questions and while they did get back to me after a few days, by the time they did I’d already spent my money, and getting that big bundle of cash together again was on my “yeah, I need to do that” list until it kinda got forgotten about and the PM expired. So I missed out on some lovely new figures, and they missed out on my big pile of cash.

Anyway, these models are Heartbreaker sculpts from (when else?) the 1990’s and painted in either the ’90s or the early ’00s. I never played Dark Legion, but picked up the odd sculpt that I felt had 40k crossover appeal, and then later bought quite a lot more during their final “Fire Sale” period. I’ve already showcased a bunch of their Zombies as part of my Nurgle Lost and the Damned force. As such, they were painted with obvious 40k influences, but without going the whole hog in case I decided to play WarZone 1e again some time.

I decided to paint him in a Khorne-inspired palette, but avoid the whole “blood spatter” thing. I gave the Kev Adams face sculpt some face-paint, to bring out the skull-like aspects of his visage even more. His gloves are made of flayed leather skin, and I kept the rest to red, black, brass and iron – with the exception of the Hazard Stripes on his chainblade. Health & Safety at the forefront, wot?

Rear view of the WarZone Nepharite.

From the rear view, we see that the only variation to the palette is the dirty yellow of his butt-tabard. I did dirty this up to tone it down when I rebased him as it was a bright, clean yellow. Same deal with the torn remnants of his shirt. I left the lacquered red of his armour clean and bright, however.

The Razide I decided for whatever reason to paint as a follower of Tzeentch. I guess the more obvious deity might have been Nurgle, what with the Swamp Thing face and the boil-looking growths on the shoulders and so forth. The tubes were originally painted in way too many colours, which I recently turned into reds, shaded with brown ink. The Tattoos… well, throughout the 1990s one of my biggest influences in many ways was Henry Rollins. I admired the man’s integrity, his no-bullshit ethos, and of course the live performances of Rollins Band were pretty impressive, with all that raw power and intensity. I also thought he made a great template and influence for wargaming models. Remember, this was back in the days when tattoos were mostly the domain of Bikers, people in the military, rather rough types of people, and musicians. They weren’t on every second guy you met, and certainly not on every second girl. The tattoos on the bikers and rougher people I knew (family & friends of) were far too small and intricate to work in miniature scale, so Rollins became a bit of a default for inspiration, with his large, distinct pieces that worked from a distance. I’ll just point out a few of the obscured ones. “LOVE” and “HATE” on his knuckles. With a cheeky ? on the thumb of LOVE = “LOVE?”

Rear View of Razide and Tattoos.

There’s a pentagram on his right thigh that’s hard to see in the pics, and the text across his lower back says “SCARRED” in a stylised font.

Upper Back of the Razide’s tattoos.

And finally, a scale shot with a Metal Guardsman I had to hand. Both are pretty handily Ogre-Sized:

These two will likely be rolled into other Lost and the Damned forces – Khorne and Tzeentch at some future time when I have a hell of a lot more models painted. Until then, they’re mostly just going to sit in the figure cases. The Nepharite of Algeroth might make it into a Kings of War Chaos-themed force, I guess. He could be a “Minotaur Hero” to the old-school RoC Beastmen.

The Razide is still available from Prince August who bought out the remaining WarZone stock sometime 20-off years ago when Heartbreaker collapsed, but the Nepharite of Algeroth seems to have been sold out. I’m sure they’d be easy enough to pick up from eBay, etc, though.