I was originally going to combine this post in with the round-up for all of the participants, but then I wanted to give another day just in case I’ve missed someone – and also, frankly because I’ve finished quite a few models that were neglected, and so I’m doing my own wrap-up since it was a main focus of my own painting this month, with quite a few models completed who would otherwise have continued sitting around for many months to come.

I was pretty happy with what I got done overall, especially since I spent the first half or more of the month painting Plaguebearers and then spent a lot of time working up some of my female models for Fembruary. Luckily all of the Female models also fit neatly into the Neglected Models Challenge as well. There was another Mentor Legion Marine who didn’t get finished, though I expect he’ll be completed within the next few days now. 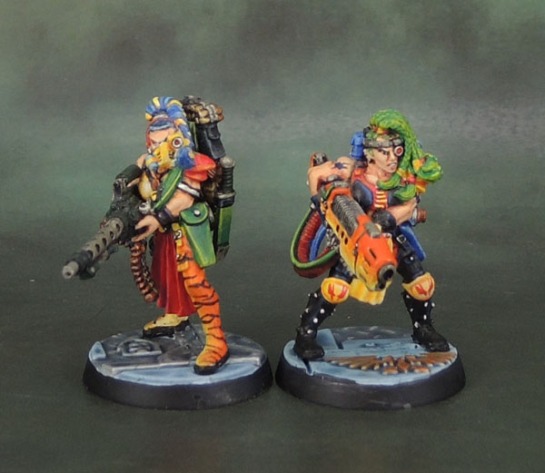 A pair of Grendel-Escher. I have another four I had hoped to update and complete, but I ran out of time.

There were five other female models I wanted to finish for both the Neglected Model Challenge and Fembruary – four were additional Escher, and the other was that Dark Elf Sorceress. The other Escher got re-shelved, while the Sorceress got a fair bit done. Perhaps I’ll get her finished in March.

While it was great to see so many other people participate (collective round-up tomorrow!) On a personal level, it was a really worthwhile month for me. It motivated me to finally finish off that Chaos Dwarf Warmachine that has been in pieces for a few years now, that Tiger was stuck for over a year. Helgar had sat on my bench for a couple of years at least, the Bloodreaver had been put away into a container, the Escher had been re-shelved after my initial spurt of enthusiasm when Necro’17 was about to release and of course the Mentor Legion were an unfinished project from basically 2 decades ago.