Yesterday, in my Ape-X post, I mentioned that I had been painting some Gorillas for DUST. These were actually started quite some time ago. Following on from the successful speedpainting of 30 Axis Zombies from DUST in January 2014, I rolled straight into the boxes of Axis Gorillas that I had sitting around. After all – the zombies were easy to do, so how could gorillas (almost entirely furred) be anything different? Fur’s easy to paint, after all!

Alas, It didn’t work out. I got a mental block on two of the aspects of these models – gorilla skin and the “silverbacks”. So they sat there, then got pushed to the side, and eventually ended up in a tub of half-painted models, forgotten forever. 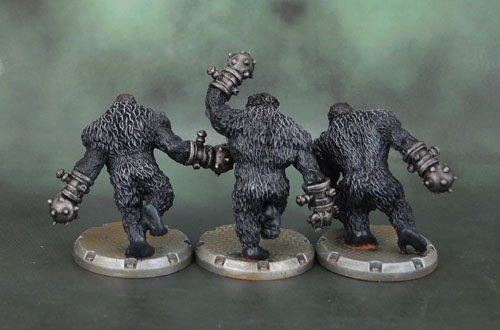 Until this month’s challenge, obviously. They’ve not been a priority to get out and paint at any stage in the interim, since DUST isn’t a game that has gotten much gameplay here, despite it looking like fun. While I’ve been aware that they’re sitting there, even to the point of naming them in the “things I should try to get done this year” post from January, I’d even forgotten about that. So yeah, while rooting around in the tubs, I saw them, and basically had one of those “fuck it, I’m getting these done so I can get them out of here” moments. 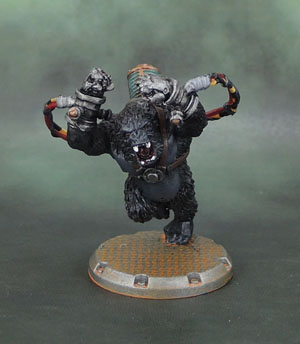 At some point, I’d also cracked open the Operation “SeeLöwe” box and added the Kampfaffen hero, Marcus to the horde, as well as Reaper’s Ape-X, which I’d gotten in one of their Bones Kickstarters. Because why not? Marcus isn’t technically part of the squad, but I think he fits in just fine with the overall post as he’s supposed to be used with the grunts. Ape-X just makes for a thematic extra, though he obviously doesn’t have any rules in DUST (there’s probably some homebrew ones out there, though!) 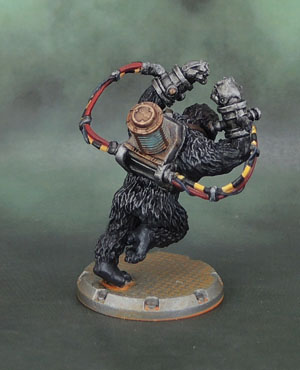 Anyhow, I did my usual thing of checking some photo references for animal skin and hides and then just made myself do what was needed to finish them off. It wasn’t a lot of fun, but it wasn’t that hard. Now they’re done, and if I ever need a cohort of cyber-gorillas for anything, they’re right there and waiting. Marcus had a little bit of extra detailing, so I tried to make him a little more visually interesting by picking them out with some colour in what is otherwise a very drab set of figures.

To finish up, I thought I’d throw in a shot of all the DUST Kampfaffen  Gorillas with their buddy, Ape-X thrown in for good measure. 🙂