Dreadtober is an annual painting challenge that runs every October. Much like Zomtober, I’d been looking forward to it and using it for motivation to get some stuff done. 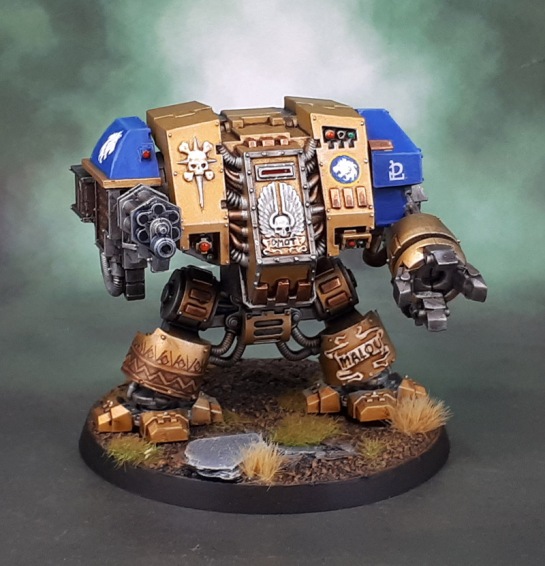 Also much like Zomtober, (and Orktober!) I forgot about it this year because of the rolling shitshow dumpster fire that 2020 has been until the last minute, so I didn’t sign up over on their main page. In fact, I had only a few days to try to complete something – so I chose one of the Dreadnoughts I had planned to paint for this challenge in 2019. And it was still in the exact same condition as the photo, too!

Yeah. Basically that’s it. Sprayed gold, nothing on the base, a touch of steel and blue on the arms. So it was time to kick things into gear.

Luckily these old-school Casteferrum Space Marine Dreadnoughts are pretty simple to paint, really – and these AOBR models are even simpler, as they omit and condense some of the extra details found on the various multipart kits. I did need ot finally pull my finger out and make some Celestial Lions decals along with some others I’ve been needing for other projects, which took a good part of an evening.

Generally speaking, I kept the paint pretty simple. As well as the orangey-gold I use for the Lions and the steel, there are some coppers and a bit of discolouration on some of the elements. A Black Templars decal respects the previous custodians of the Ancient’s suit. 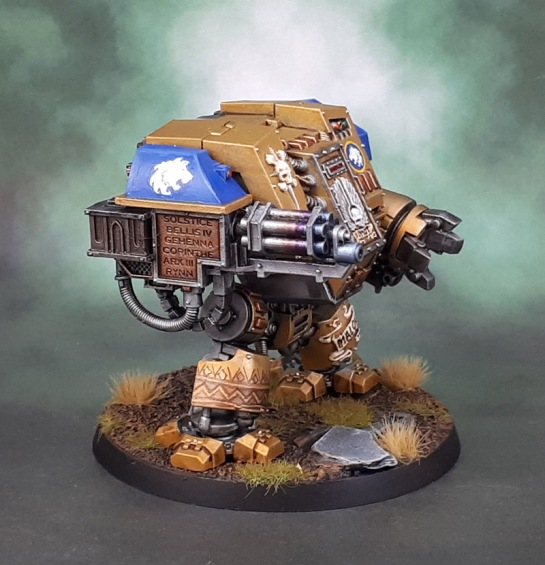 The model was still a little plain, so I also added some heat discolouration to the Assault Cannon barrels. That arm of course is from the Ancient Dreadnought kit. Since I try to avoid gluing Dreadnought arms on if poissible and this one isn’t a great fit, there’s a blob of blu-tac in there as well!

Since the Celestial Lions Chapter has a pseudo-African heritage, I also did some freehand on the right greave, and gave the Ancient an African name (from someone I know IRL). Also a nice shot alongside a Primaris Lieutenant and a flame trooper.