Backing up even firther from yesterday’s Vindicare Assassin post is the original Imperial Assassin model from 1991. Armed with a Combi-Weapon that bears more than a passing similarity to the weapon weilded both by the later Eversor Assassin and the various carbines held by modern Adeptus mechanicus models, this guy was rolled in together with some of the earlier Rogue Trader models from the various Adventurers ranges into the nascent Forces of the Imperium category.

A with yesterday’s assassin, this model is my original dating back from its time of release, and like the Vindicare, it was started but never completed. Even being stripped once and then restarted …and then never completed. As with the Vindicare, the paint job is a homage to the original “official” one, but with the weapon paint and a couple of other things toned down (no need for a checkerboard pattern on this gun in my opinion) – but still retaining some of the nonsensical, like the gem-like knee and elbow pads, the red tassels on the power sword, and the brown straps on his ninja-thongs (flip-flops to you Americans!)

The base deco is a Rogue Trader-era Eldar head that I cast off an existing model using Oyumaru for the mold and Kneadatite for the helm. The angles here aren’t the best, but yes, it’s a yellow helm with black tiger stripes to keep it era-approriate.

This leave me with just the Eversor and Callidus Assassins to paint to (finally) have one of each painted. Then I can move to second sculpts… 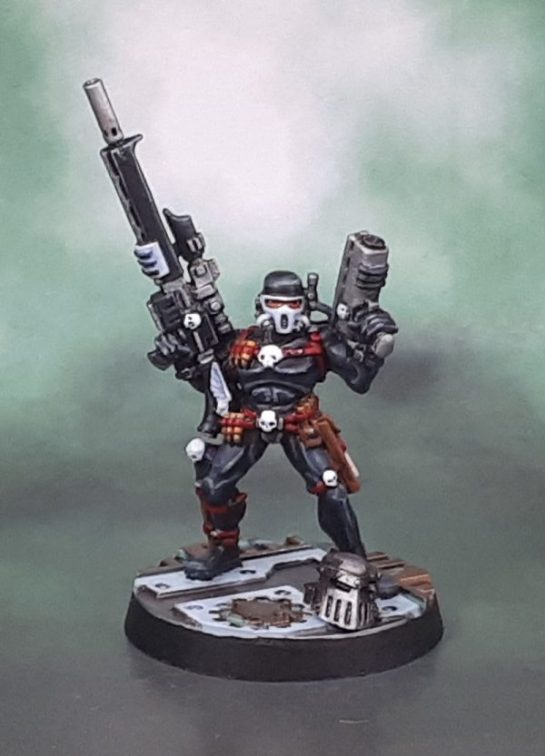 Before Imperial Vindicare Assassins spent their time cowering behind rubble, or even spent time in aiming poses, they liked to hang out, guns akimbo and posing heroically because Warhammer. This model is the original Vindicare, released way back in 1995/6. It was the first of the second wave of 40k Assassin models, quickly followed by the Callidus and then the Eversor – all sculpted by Jes Goodwin. The colour scheme is a nod to the original “official” White Dwarf scheme as well as well as my original work on this model, which I’ve preserved. Which is why a sniper “assassin” is covered in red-brown straps, brown pouches, armed with shiny silver weapons and decorated with an assortment of white skulls. 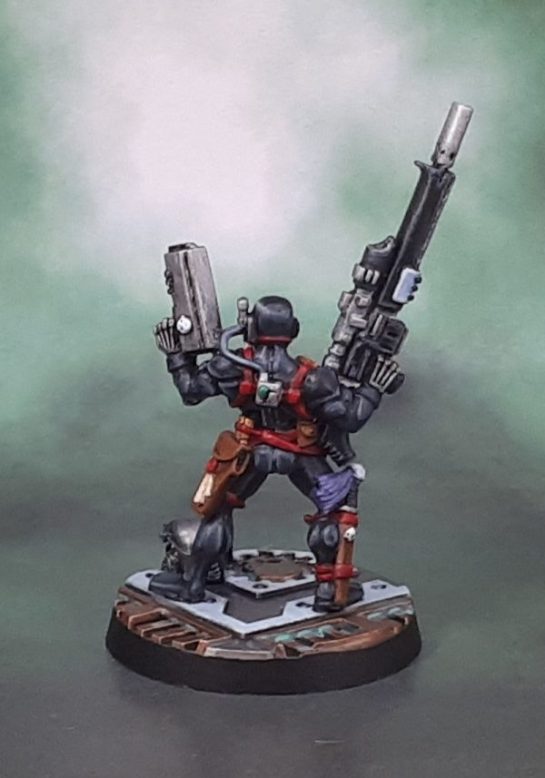 This is the model I actually started painting but never fully completed back in ’95-96. I’ve been “making” Neglected Models for quite some time! The tab had broken off and the model sat in what was basically a junk box. I fished it out, pinned him to a new mechanicum base (complete with blown-out Iron Warrior helmet!) and set about not only restoring but completing it. The original paint has been basically used as a base coat for most of it, so in a sense the original paint is still visible for 90% of the model – the main difference is that it’s fully now complete.

I do have another of this sculpt, and so when I get arond to painting it I may well do something a bit more camouflage. Or Low-vis in some other way that won’t necessarily include red straps…