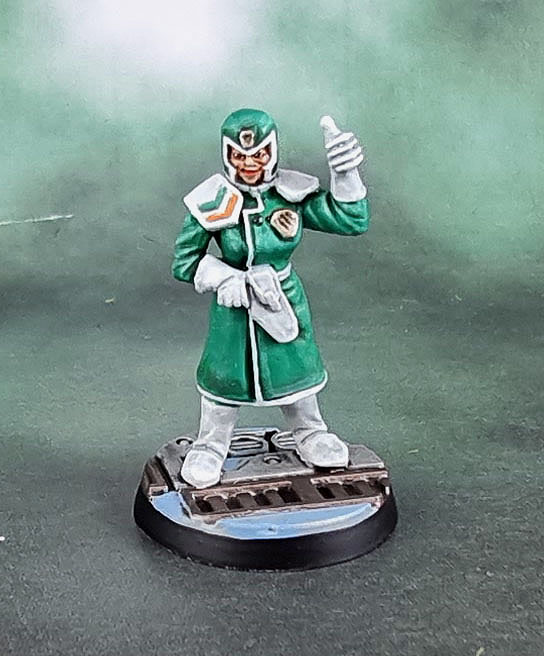 Following on from the recent set of old-school Citadel Judges I painted as part of Dave Stone’s Paint What You Got challenge when he mentioned that some people had decided to paint Judge Dredd models as well, I thought I’d keep going with a few more of my own. This Emerald Isle judge hails from the sadly short-lived Mongoose Publishing range of Judge Dredd figures. And.. uh. Huh. I might have something to do in uploading some images to the Lost Minis Wiki… Anywhoo… ss the other Judges I painted were started and inspired by that challenge, Old Judge MacO’Conihoonihan here was painted as a model for Fembruary. I’m not entirely sure if Alex over at Leadbaloony is “officially” running Fembruary this year, but regardless, I’ve been working on some models for it.

Not that we should need an “event” to paint female models of course, but given that I paint all sorts of stuff anyway it’s a good chance to make a specific pivot to paint a few more models that I wouldn’t have usually worked on – and a good chance to make myself complete some others that have sat half-painted for some time – some of those in later post(s)! 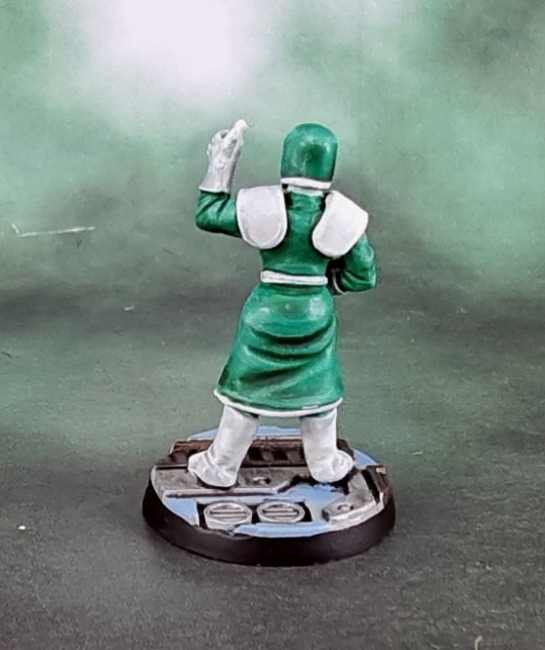 While I feel like I’ve read a lot of Judge Dredd stories over the years, given the sheer amount written and published over the decades I also haven’t read a lot of the Dredd stories. That “the” is pretty important to distinguish the meanings between those two sentences! And among those that I have never read are the stories dealing with the Emerald Isle, or Ireland, or Eire, or, perhaps in this case – Oireland as so elequently put by Sho3box when he shared this same model in a post some time ago. If you love cringe-inducing “Oirishness”, please do take the time (2mins) to watch the below “highlight” video of Becky Lynch’s first match in WWE/NXT (WWF for you old-timers!) Make sure you also have the volume up!

It’s got Foighting Oirish! It’s got Riverdance! It’s got Diddly-Diddly-Diddly! More cringe than you could cringe a cringe at. Thankfully, old Becks has come a looooong way since then.

I also took the name of Judge MacO’Conihoonihan from Sho3box’s post – which could be his own piss-take, or certainly well could be a legit name of a Judge Dredd character! 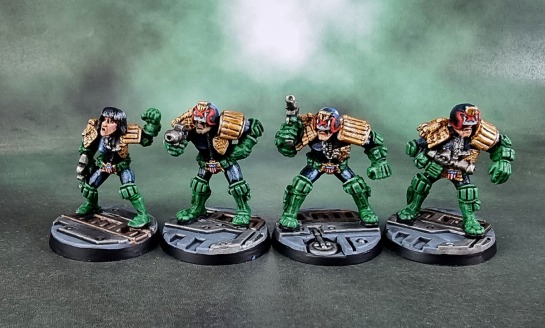 I’ve had these figures since the late 1980’s, they’ve been painted and stripped twice (enamels, then early acrylics) and have been sitting in a zip-lock bag in a figure box for the last decade or more. When I saw that Dave Stone’s current challenge also had a group of people painting Judge Dredd/Mega-City One models, I decided to dig into my own models and pick a few out. Now, I don’t have any of the most Recent Warlord Games models, and while I DO have most of the Mongoose Judge line, a few from Wargames Foundry and the odd special model (Mars Attacks, Minty) – I also found these. I did also have Anderson, a Brit-Cit judge on bike and Judge Death from the early Citadel line, but they may be lost to time. 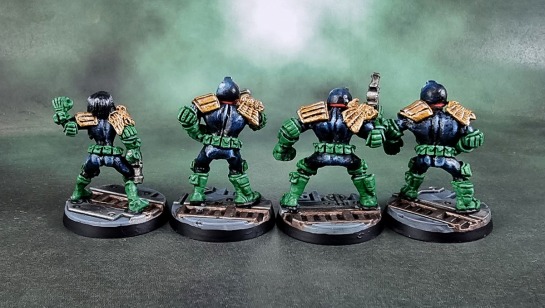 The four Judges from (our) left to right are Judge Hershey, Gallagher, Dredd (v.2) and Bambra – who appears to have been sculpted to be leaning on a bike or something. In the end and after a slightly rough start, I really enjoyed painting these. The biggest issue that they caused was wanting to immediately grab out another four of them to work on once I completed them – and I have SO many other models to paint. That’s the beauty of these challenges and even sub-challenges. I’m hoping Dredd makes a cameo in a future challenge so I can have an impetus to gran a few more of them. 🙂

I’m just throwing in my palette for the green and the gold in here – mostly for my own future reference! 🙂