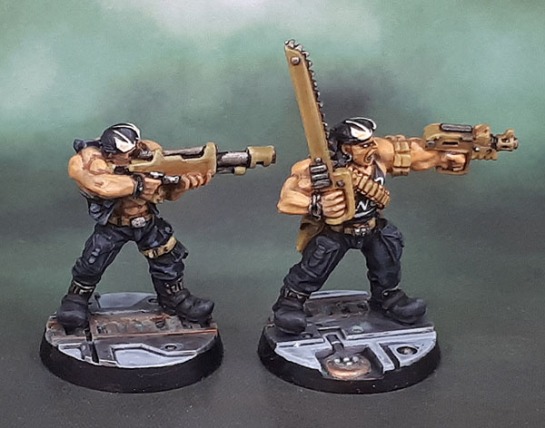 Yeah, I liked using Catachan models in my Necromunda gang. Here’s another (two) of them – in fact this was the first of the Catachans to be used as a ganger (the Blue Camo dude from last week was actually the last of them). From memory, the first of these two models was the model with the Lasgun. I think he may have picked up some close combat skills, and despite GW telling us back then that we needed to keep our models WSYWIG, there was no way I was going to chop up or otherwise fuck with my models once they were finished. I did have a suitable model to turn the guy into a Close Combat specialist, though – so I simply got a Catachan Sergeant and gave him a pistol swap. The Chainsword was probably just a regular sword. I can’t recall, but it was close enough in my estimation and nobody ever complained – so all good (remember – these were the days before a wide range of easily accessible plastics!)

There is a little 1990’s “conversion” at work here on the “Sergeant” model, since he originally had a headband and an eyepatch, so I carved the eyepatch off and carved an eye into the face of the model with a scalpel, and turned the headband into a bandanna by carving the top of it (and his hair) down. I also swapped out his bolt pistol for the Autopistol (from the metal Necromunda Weapons sprues of the day). 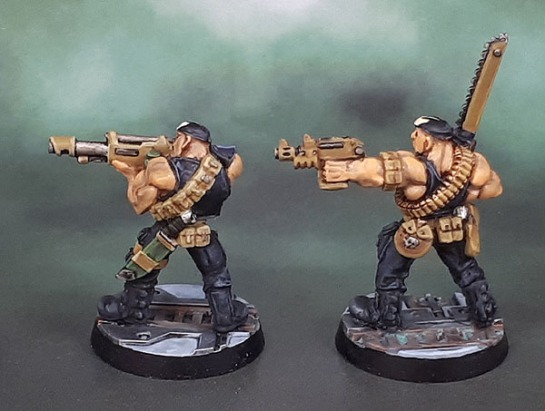 I’m pretty sure in later campaigns, the CC-oriented model was used to designate a juve starting with CC kit, later graduating to a full ganger and the right to carry a lasgun. I’ve got a vague memory about him having the sharpshooter skill as well (was that the name of it?) so it could be that the rifleman was painted first to be that ganger after picking up that skill in the first campaign and the CC happened in the second – and then the juve use in the third. I can’t recall – we played a LOT of Necromunda back in those days – and it was fucking glorious!

Shout-out to Ara, Jared, Matt, Ange, Brad, Aman, Josh, Dave and the rest of the gang from those days who will never see or read this.

These two models were fully painted, but needed touch-up and paint repair from wear and tear over all those games, as well as entirely new bases, so they still count as “completed” because renovations to 2019 standards have always still counted. While they’re entirely suited to tattoos, these two won’t be getting them as they’re also time capsules from 20 years ago, and besides, they’d need to match perfectly for when I use them as the same guy as opposed to twins, or clone-brothers, or very close gym-bros. Just one more rep! You can do it, brah! 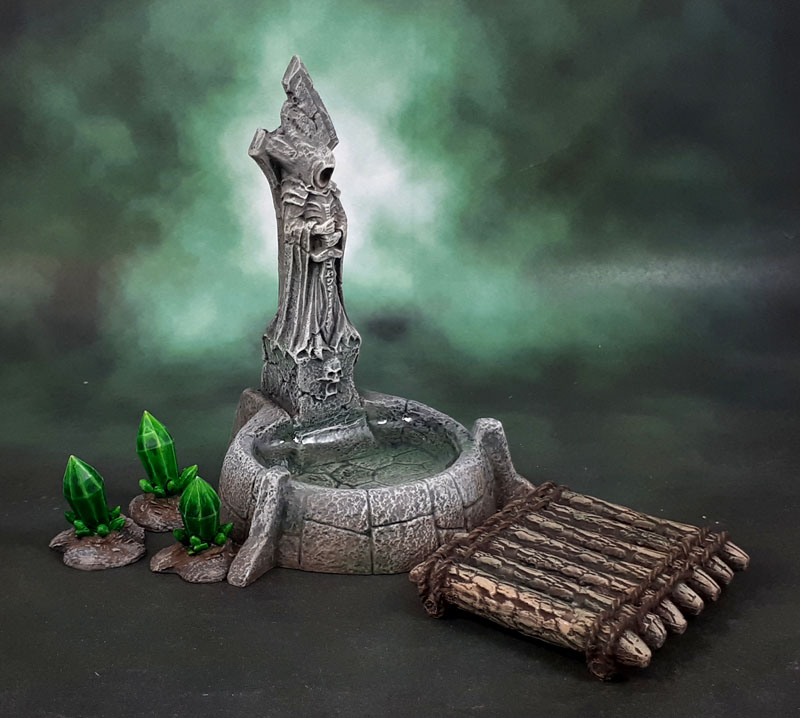 A long and paintful title up there, I know – but the stuff in here comes from a couple of sources, they really don’t merit three posts, and I want people searching for this stuff online to be able to see how it looks and turns out with a bit of paint on it. I know when I google models it’s always helpful when I can find painted examples of the things online. 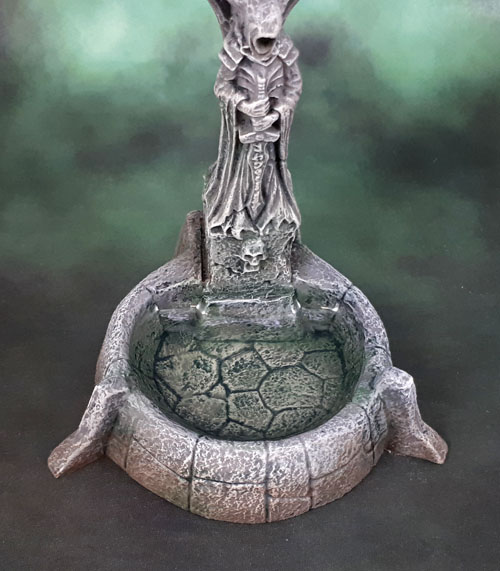 The Fountain got painted because easy wins. I added some green above and below the water to suggest age, moss and algae, and cared enough to use water effects to add some water depth, but not enough to fitz around with finshing line and realistic water in order to make a “working” fountain. So we’ll just call this water stangnant, yet remarkably clear. Just like magic water in a dungeon, amirite? 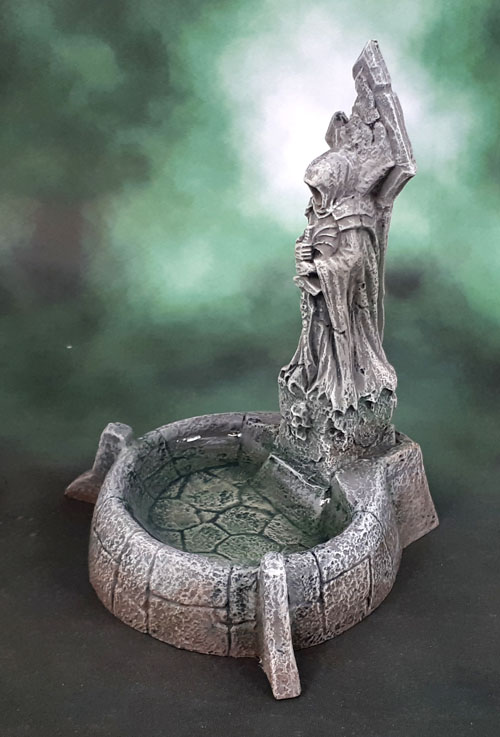 Not a bad model. It’s made of typically crappy soft bones plastic, but at least it wasn’t warped like pretty much everything else in the “Fantasy Scenics” set. I’m sure their terrain stuff was better in Bones 3… 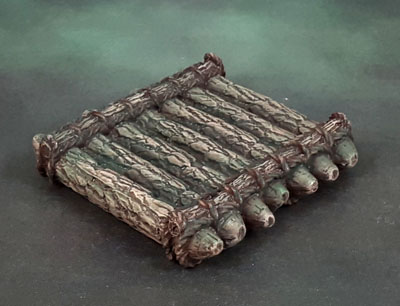 Next up is a raft. Nothing special at all, and once again painted because “easy wins”. This pic shows the underside of it, where I’ve again added a bit of algae-suggesting green to it. This piece came out of the Dreadmere expansion, and is made of “Bones Black” (despite being the same light grey that everything in this KS arrived in). It’s a much, much better material than the original Bonesium PVC, is harder, and took a spray primer and spray varnish. Finally! The drawback seems to be that it’s more breakable, as a couple of my larger models from the KS arrived broken. I’m still slowly doing inventory/QC of the KS because time and tediousness, but I’ll contact Reaper once I’m done and see what they can do for the broken stuff. They’re always been good in the past, at least – and more fragile material or not – it’s a mile better than the original stuff! 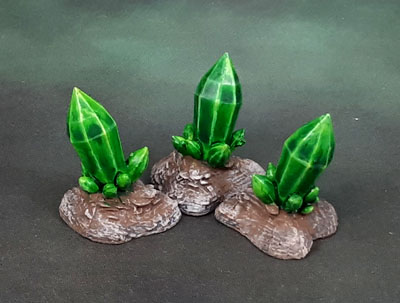 Here we have some little crystal formations from Mantic’s Terrain Crate KS. Have I said “easy wins” enough times here? The crystals were painted with Old-GW Putrid Green (similar to Moot Green, but lighter – from the original hex-pot days), then gone over with Warp Lightning from the Contrast Paint range. Afterwards, I lined the edges with putrid green again, and then went over those lines with a really thinned yellow. It turned out okay, I think. 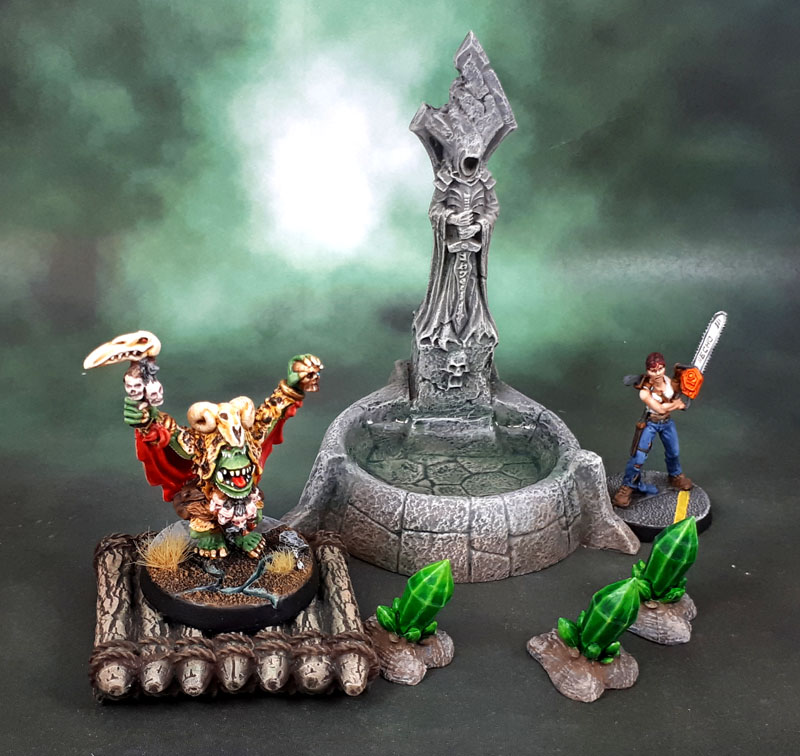 Here’s a second group shot that is also a scale shot. Because I realised there was really no useful scale reference for any of these things in the previous photos. Enjoy!

While none of this stuff is super-exciting, it’s all pretty decent and pretty versatile, fitting into pretty much any fantasy gaming setting from Warhammer to LotR to D&D, as well as grimdark 40k. The raft and fountain could even be used in some historical games, depending on the period.