Pretty tired at the moment, hence the lack of updates over the past few days. I did just get out to the shed to take a few photos, though – so at least I can wrap up my own July Painting as well as what I finished for Jewel of July this year – and shit! I’ve just remembered that I still have forgotten to weathering powder the bases of those bloody trees!

Not as many finished for the Jewel challenge as I’d hoped, but then I’ve still been busy with any number of RL challenges, so once again – it is what it is – and my outcome wasn’t terrible by any means, so while I’m not super-please, I am at least ok with it in the end. Once again though, the month ends with a pile of models still on the desk that I’d hoped that the month’s challenge would help me to complete.

Rather amusingly, almost every model completed in July would have qualified for a Neglected Model challenge as well. That’s been an unstated (here, at least) thing in the back of my mind since December/January – for me to try and get as many of the neglected models I’ve accumulated over the years done as possible this year. I’d hoped to get all of the models that I’ve started and abandoned done this year, but it seems that’s more than a bridge too far. Maybe if I didn’t also have to work or have other responsibilities and interests, but that ain’t happening anytime soon!

Hm.. looking through, though – everything here was actually neglected except for three models. The trees had nothing done to them besides cleanup and spraying, but that had all happened more than a year ago. The rubble piles were also primed months ago. The dragon statues hadn’t had anything done to them previously, but they kinda fit due to where and how they were stored. But given that I’ve always considered “assembled, primed and then abandoned” as “started” for the purposes of Neglected model challenges… the only ones with less than that on the clock would be those terrible Dark Stone Brutes, who ad been clipped from the sprue and then forgotten about until I decided to use Contrast experiments to also knock them out quickly. 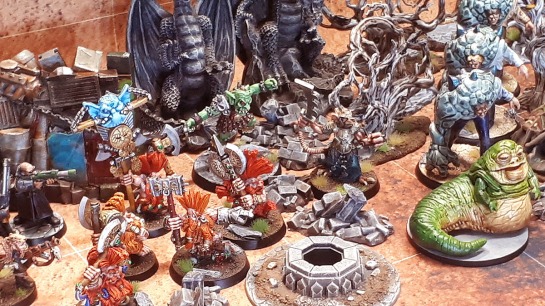 In the end, I just managed to get over my monthly target in July, with a total of 36 models. Thank goodness for meaningless scatter and simple boardgame terrain! I guess the lesson here is that this minimum-1-per-day-per-month sub-challenge I’ve had for myself is a good way to keep a constant motivation to get all those little bits of scatter terrain that we gamers tend to accumulate done. Add these to my previous month’s total of 229/232, and I’m up to 262/265.

The weather here is also shitful right now (I feel sorry for people who have to work outside in this – shoutout to IRO!) and spraying (priming, varnishing, mid-paint protective coats) are just out of the question right now, so the next few updates will be the one August model that I got varnished before the weather turned, and a couple that will look pretty much identical once they’re sprayed… Jewel of July Community Round-Up won’t be until next weekend at the earliest. As stated earlier, I’ve been fucking exhausted lately – so it’ll be done, but in good time. 🙂