And so today I finally finished the second two dozen of these. The first batch had all but two wearing the bronze bell curiass – the other couple wearing a linothorax. I realised that with the limitations of the Warlord/Immortal kit there was no avoiding having a whole lot of the models simply wearing robes and a helmet. So this lot are in essence the “secondary” group of Spartans to the first. Like the first batch, these are a little anachronistic in terms of their gear, but nomoreso than most media depictions and they look decent, so I’m fine with it.

24 Spartans lined up in a Phalanx for Skirmish-style gaming

As such, I went for a shield scheme that would be distinctive from the previous set, to mark them out as a separate unit. Black Lambdas on a bronze field, rimmed with red was a simple scheme to apply that also looks striking and effective. 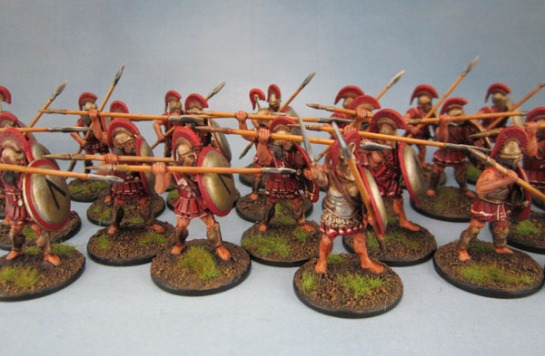 Details of the linothorax and robes.

Being a mass of historical figures that will be far in excess of my “proper” Fantasy armies – and also made of figures on the low end of the detail scale, being both “historical truescale 28mm” and frankly not that detailed anyway (their feet are just undetailed hams with a hint of toes at best) I gave them as simple a tabletop job as I can stand to. I still couldn’t help going and lining the clothing of every one of them with a bit of white pattern, though. You can really only see some it from the side or behind, though.

One Horde or Two Regiments.

They’ll be predominantly used for Kings of War at this point, and so the 24 models make up either two regiments – or more likely a horde – of Spear Phalanx. Marouda helped sporadically, but didn’t enjoy the experience, so I ended up doing much more on them than I’d planned to.

Onwards! And so forth.

I did a simple conversion to mark out the leader. Not that it matters for KoW, but I like to take the opportunity to add a little bit of character in this way. I gave him his spear to hold in his shield hand so that he could wave his sword in the air, no doubt while delivering a stirring speech or battle cry to his men. If many years of warhams have taught me anything, it’s that leaders must be shouting, not wearing a helmet, pointing, or waving something around in the air. It’s simply the rules.

And alongside his little mate from the first unit.

These twelve models are the first of 36 Spartans that Marouda and I started painting the other day after watching a doco about (who else?) Leonidas and Thermopylae. She seemed enthusiastic enough, and off we went. It took three days to clean and assemble the 36 models, and with a bit of daily painting, we’ve (well, almost entirely myself) have gotten the first dozen done. I swapped in a lot of the bronze bell curiasses into this group. Initial paint as noted the other day was a dark Tamiya red spray with a Zenithal highlight of Army Painter Red. Maybe I have a crappy can, but that AP spray really leaves a horrid grainy finish. I don’t think I’ll buy their stuff again. I’d rather pay a slight premium and buy GW or Tamiya’s coloured primers.

Anachnonistic Spartans showing their shields. Ready for SAGA Ancients! When it becomes a thing.

The Warlord (formerly Immortal) figures are decent enough, and have both positives and negatives. The sprues that make up the majority of the kits are identical between the Spartans, Ancient Greeks and Classical Greeks, with only the command sprues offering any differentiation or extra pieces. The Spartans come with a sheet that has 90 Lambdas, though that’s broken up into 30 White, 30 Black and 30 Red – so if you want uniformity from your box of 40 figures, you need to buy more. Except – here’s the kicker – Warlord don’t actually sell them!

I got lucky with Warlord’s quality customer service when I called them the other day and asked to order several sheets. I paid for the EIR sheets and they’re going to manually swap them out for the Spartan sheets, which will give me enough to have some freedom on my boxes of Victrix Spartans that don’t come with any decals at all.

Of course when they’re front on, you can’t see their armour decorations.

I did my research before putting together or painting these guys. The Warlord models don’t come with cloaks at all, which is a shame. There’s differing opinion on whether Spartan linothorax armour (the linen armour) was dyed red or not, so I went with “yes”. Similarly with the horsehair crests, there appears to be differing opinions on red or black and white, or some combination. Since the Spartans were around for quite some time, I’d guess both are probably correct. Similarly, I chose a “Hollywood” style anachronistic combination of the Corinthian Helmet (worn in earlier times) over the Pilos, along with the Lambda (used in later times – and not yet at the time of Thermopylae). Let’s face it – if anyone were to decide that they don’t want to play with us because the Spartans aren’t historically accurate (and knowingly so! GASP!) then I probably didn’t want to play someone like that anyway. 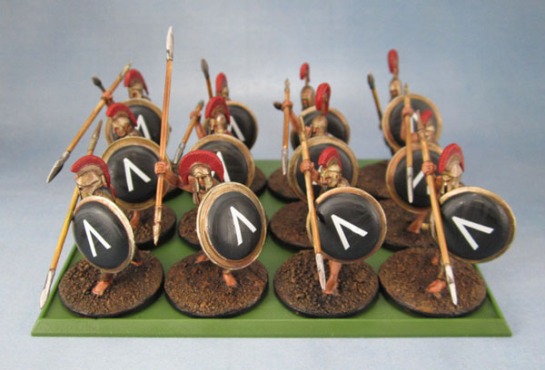 A small unit of Spartans, three deep. Ready for Kings of War!

It wasn’t until taking these photographs that I realised I forgot to flock the figures. I’ll have to do that tomorrow. I might go over the shields again with a satin varnish. The matt is a little washed out. 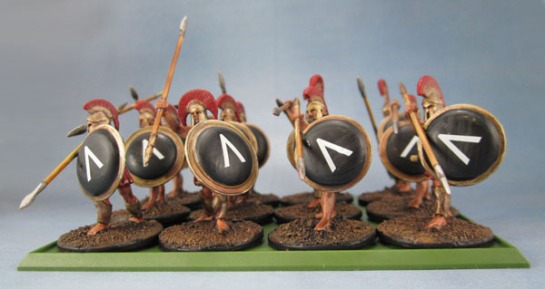 Low angle shot to see the rows of shields.

These models aren’t going to win any painting competitions, but it’s been a nice thing to finish a dozen models – a unit – from sealed box to ready for the table (after flocking!) in only 1 week. They’re at a tabletop standard that I’m quite happy with for historical models that I literally have hundreds of (roughly 900-1000 plastic infantry between the various types of Greeks and Macedonians – ouch!) It’s also been a good learning experience on what to do and what not to do. Now to get the other two dozen of this batch finished!