So as part of the big cleanup resulting from the games room project, I rediscovered my large stash of unopened DUST Tactics unit boxes. I ‘ve also been reading through Sho3box’s blog recently, and the man has a nice collection of Zombies going there. This helped to inspire/motivate me to see if I could paint up the boxes of  Axis Zombies. At first I thought I had four boxes, but then found another two(!)

I elected to use the default DUST grey undercoat as the base coat for the models, mostly due to there being 30 of them, and wanting to get them done quickly. I initially tried a few experiments trying to wash some feldgrau or feldblau into them from my Coat’d’Arms paints, but simply put, they just didn’t work.
Given that these guys were
a) Zombies, so low on the scale of painting importance.
b) There’s 30 of them.
I simply gave up in the end, rather than completely repainting their jumpsuits with a different base coat.

I did use these figures as a bit of a testbed for a couple of new mediums I’d found on the net and mixed up – I always find low-priority figures to be good for that  sort of thing.

While I’m aware that the paint on these is very much tabletop quality, and nothing anyone is going to be excited to emulate, I’m noting down the colours anyway – for my own future reference if nothing else.

I drybrushed several layers of grey onto them, starting with VMC Basalt Grey through a mixture to pure Army Painter Ash Grey, then washed down with a 1:1:1 mix of Les’ Soft Body Black, AP Dark Tone (formerly Badab Black, apparently) and my new custom paint thinning mix (found on the net, might have been on WAU) 50% Distilled Water, 30% Liquitex Flow Aid, 10% Drying Retarder, 10% Matte Medium (and 90% love!)

Hordes of the Things.

Boots are VMC Black Grey with AP Dark Tone (again, I considered brown ankle boots but went with the equally if not more common black).

Bases were painted in VMC Oily steel, washed with a couple of drops of VGC Orange Fire thinned with “Dr Faust’s Magic Wash” – which is 1pt Future Floor Polish/5pts Distilled Water. Then drybrushed with VMA Steel. This was to give a mildly rusted effect, though it didn’t turn out quite as well as I had hoped – though still good enough.

Panzergloves and, erm, Mace Hands (Keulehands?) were VMC Oily Steel, then drybrushed with VMA Steel, then washed with AP Dark Tone (I considered using blue, green or brown as well, but when I asked Marouda we went with Black.) Finally, I painted the little nodules with VMA Rust then VMA brass. I considered a cool glowing green, but I’m just not willing OSL-ing 90-odd little nodules across 60 arms. Especially on speed-paint Zombies. Finished them off after that with AP Soft Tone.

Grouped into their “Squads”.

I also needed some way to distinguish them in game terms for DUST (where they come in units of 5). I considered painting the bolts on the bases different colours (gold, silver, brass, copper, etc) then thought of painting runes and symbols used by WWII Germany on the backs of their bases. In the end I decided to paint each group of five with different (rotting) flesh tones. I figure this way the zombies can all be mixed up together if they’re running down halls in Incursion, spreading plague for the Dark Legion in WarZone or doing Typhus’ bidding in 40k – but can still be split up into 5-a-side teams for DUST.

Based on that, I just started the skin tones with a mix of Old-GW Rotting Flesh and AP Army Green, then for each subsequent 5 I mixed in other colours. Blended some purple into one set while it was still mostly-wet. Later on, I washed the flesh on the others with purple, brown, green, red and blue AP wash. Eyes and teeth were done with a fine brush and an old VMC off-white paint (the heat label has worn off, so I’m not sure what the paint is anymore!) 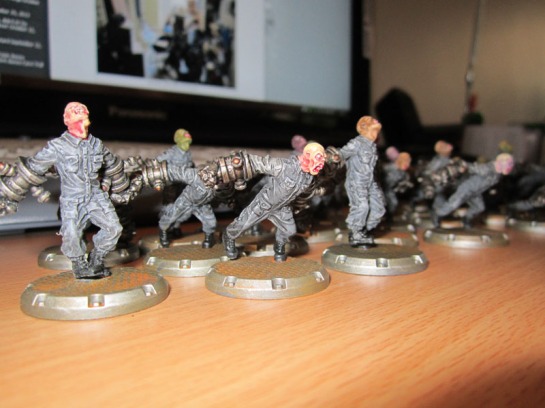 As you can see, the figures are harshly shaded by the drybrushing and washes, and far from my best pieces or works of art. No argument, there are much better-painted examples of these out there on the net, and if I’d had one box of five, I’d have taken much more individual care. But – they’re zombies, so I think harsh and dirty works for them (I doubt they have a lot of laundry done). They’re a horde, so fast and effective is what I was after, and, well, they took 6 days from unboxing to varnishing – and that’s 6 days of doing a little painting and a lot of other stuff. While I wouldn’t use this method for many other figures, I think it worked here and I now have a bunch of figures that can work pretty well across several settings, as well as – obviously – for the boardgame they’re made for.

Finally, there’s the issue of blood and gore. I do own a pot of Tamiya Clear Red. I recently bought the embarassingly-named GW Blood for the Blood God and Nurgle’s Rot, and look forward to an opportunity to test them out. While I enjoy a bit of splatter from time to time, and as I mentioned earlier, I don’t see these guys getting their uniforms/jumpsuits cleaned very often – they’re clearly also not feral zombies, as we have in most zombie media. These guys are pretty obviously product, tools, “assets” of their controllers, so they’re not getting out there into the streets and just tearing the shit out of people. About a third of them also lack hands, having two Keulehands, which I imagine makes the whole “tearing gibbets of flesh off a victim to consume them” thing a little more tricky anyway. These guys also seem more mummified by ways of preservation, rather than decaying – which again makes some sense if you view them as a created commodity, rather than a freak of nature. (And yes, I’ve seen the awful looking 1:6 scale figure, but these look quite different from that as sculpts). So given all of this, the fact that they’re not obviously decaying, and that their heads are the only fleshy bits of them visible (no rents in their jumpsuits!) I’ve left them clean of blood, gore and pus – Just as World Eaters don’t need to always be covered in fresh or dried blood spatter, neither do all zombies.