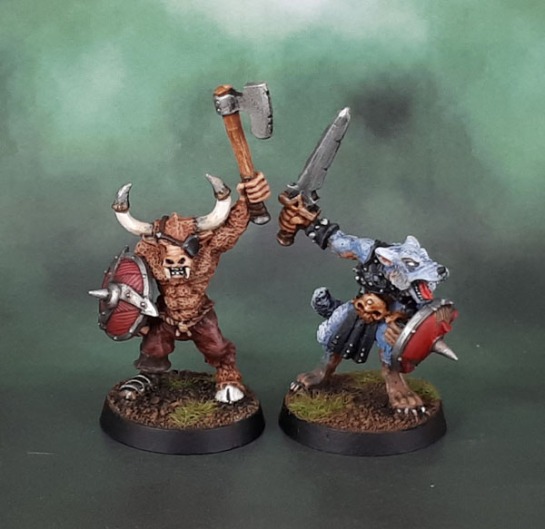 Okay, so only one of this pair is actually dog-faced, and both seem kind of generic in the sense that one of them looks very Werewolf – though human sized rather than the Ogre-sized Werewolf that seems to have taken off in the past few years of Miniature Gaming. That figure in fact is the brother figure to Wilhelm Chaney, the original 2nd Edition Bloodbowl Werewolf (bottom of the linked page). As such, the model could easily be used as a Werewolf if needed for something, albeit one armed with sword and board.

The second one of this pair of early Khorngor could just as easily be used as a Slaangor, at least for us Oldhammerers, due to the bovine head that could tie nicely in with the original Keeper of Secrets. 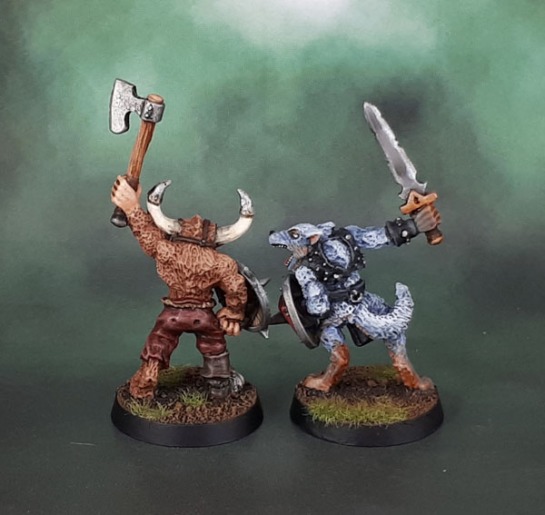 The reason I went with Khorngor for this pair – at least for the title of this blog post is because when I looked them up in Slaves to Darkness, they’re both pictured in the “Khorne” section as Khorngor. I’ve kept the paint suggestive but generic, so they can easily fit in with a “proper” Khorne unit, but also just as easily be used as unaligned Beastmen. Similarly, I’ve used Chaos Marauder shields on them, both because I think they work with the models and poses of this pair, and because I didn’t intend to freehand any rules of Khorne et al onto them.

Like the others I’ve completed recently, these are Jes Goodwin sculpts, and the quality shows through even today. Such a shame he’s no longer sculpting…