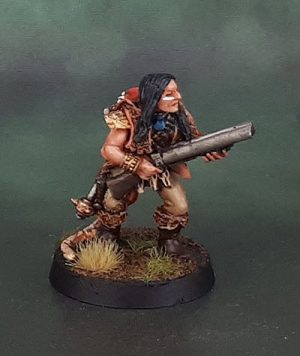 Another Neglected model found in a figure case towards the end of September was this Ratskin scout, from the original release of Necromunda back in the mid 1990s’. This model was released in 1995 or thereabouts, and is a Michael Perry sculpt.

I had of course painted about half of it, and basecoated about 95% of it, but when I got it out of the case, I decided to completely paint the skin in a more ruddy tone, repaint the pants from the dark green that they were in originally with a brown leathery colour, redo the browns on the boots, and then try to differentiate the human skin tones from the similarly ruddy tones I’d used on the skinned rat. So… almost everything, only retaining the rat fur and using the rest as base coats at best.

Once the model was complete and ready to be sprayed, it took a dive from the little tray I was carrying it on, necessitating a trip back inside to have the damage repaired (hair, shotgun, shoulder pad) Luckily it wasn’t too badly mangled and was fixable.

I also decided to give him some simple warpaint, though I kept it fairly minimal. Enough to suggest the Native American influence on this line of models, but also pretty generic and a bit reminiscent of American Football players’ greasepaint (yes, I know they wear black). There are some pretty amazing Native American face/war paint designs online, so I think that’s something I’ll definitely revisit in some form down the line.