The post title says it’s a two-few, but it’s technically a three-fer post. First up we’ve finally got the collection of Neglected Models that I managed to get done over the course of September. Not a bad collection of neglected figures in September, especially as they’re all individuals.

I also managed to finish this trio of Mantic Terrain Crate scenery just before the end of September. Usually I like to give things their own posts, and if I had a bit more terrain to show, then I’d put them together, but I’m not putting together a post for three sets of PVC mining tools on a rack. 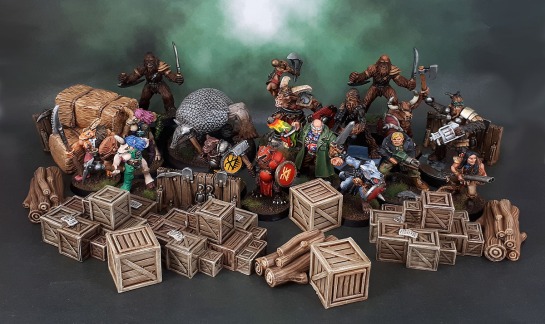 Finally, we’ve got the September round-up post, with both the Monthly Challenge figures as well as everything else finished, including those Tool Racks. Regular readers will know that I just haven’t been feeling it lately, and so it took until last weekend before I took my own monthly round-up photos – but then there was naturally an issue with a model that was on a different shelf, so it took me until today to go out there and retake that photo.

With those last-minute took racks, I just squeaked in 30 models for September, continuing my personal 1-per-day-of-each-month “challenge”.

As for the running total, this 30 added to the 434 I had completed by the end of August takes me to 464 to date this year. October has been more challenging, but I’m just squeaking by so far due to more simple terrain bits and some unit painting. Those will be on show in a little while, though. Next up – The (belated) September Community Round-up.