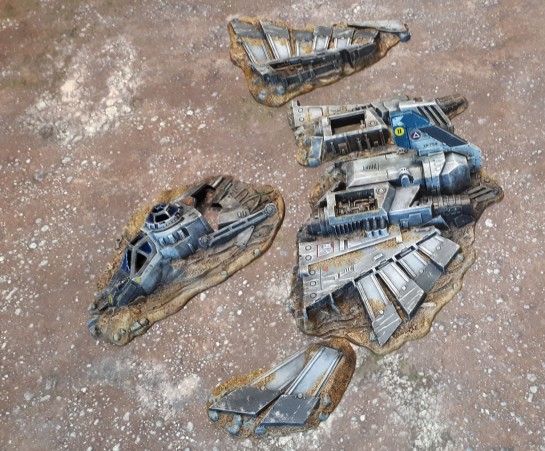 Today we have a model (well, five distinct models that make up a multi-part terrain feature) that hits several targets. Firstly, they were a big part of my first painting Tray, so getting them done really clears them off and gets me close to completion and able to start the next one. The crashed Aquila Lander is of course the centrepiece from the Warhammer 40k 4th Edition “Battle for Macraggae” starter set, released (and purchased by me) in 2004. Ouch.

I did at least finish the Lt.Varras model back in 2015.

The second of the three targets that this lets me smack is Dave Stone‘s Summer of Scenery Challenge running through July and August. Even though he’s clearly mislabelled the thing, as we’re in midwinter currently.

I’ll get to the third momentarily, but first I do want to throw out a thanks to Krautscientist. While I did start painting the thing aroundabouts 2004-5, the project (like so many other things) got kinda shuffled to the side and forgotten about for a long time until recently. And by recently I mean January last year (2019) when the improvements to his lander inspired me back onto the on the road to redoiong this thing. You can’t see it all that well in the pic, but like KS, I blocked up that annoying hole in the back of the cockpick section with a panel and some hanging cabling. Unlike KS, I didn’t go the whole hog and add in an unconsious/dead pilot or a pilot’s seat. Mostly because I’m lazy, but I can always go back and add one in later. Buit probably won’t. Because I’m lazy.

I added a bunch of decals from various kits and my little tub of random decals at certain points to make the flyer look a little more legitimate. Little detail touches like this I find help to make the whole thing look that much better. 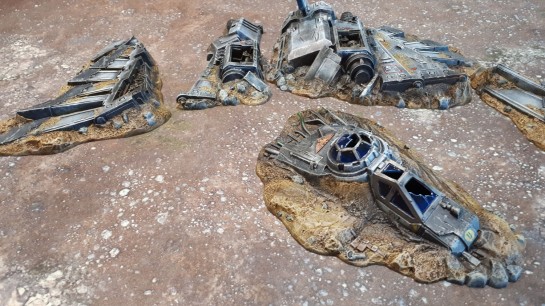 The chewed up dirt was originally in the mid-brown, then known as Citadel Snakebite Leather (currently Vallejo Leather Brown/Citadel XV-88) which was what I used for my desert bases in that time, but I changed that up a little, using the Vallejo Dipping Wash that Dave Kay put me onto after he did his Secret Weapon Tablescapes tiles. This darkened them down. I then used dark soot grey weatheirng powders to add “scorched” effects on the crashes sections as well as the sand/dirt around them, eventually drybrushing some sand colour over the whole lot, Aquila and surrounding dirt to unify it.

As I alluded to before, there’s also the third target that the Aquila let me hit, and that was one final(?) submission for Ann’s Miniatures of Magnitude Challenge for May & June. When I asked Ann if the Aquila was a large enough piece of scenery to qualify, she was not quite so enthusiastic, but said that she’d happily accept it if there was some kind of giant monster smashing through it, so I present to you, a Kaiju shot with not one, but TWO giant monsters smashing their way through it! 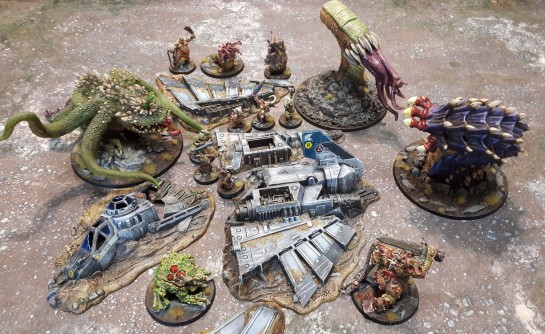 And while we’re at it, why not expand that alongside a few more models, for scale and also for fun! Nurgle zergs Goremaw!

The Aquila is being posted a little out of sequence to fit in with Ann’s Challenge. I’ve still got a few more of my own models for June still to post up over the next several days, as well as another piece of terrain finished yesterday (as my first model of July).

…and just maybe, one more Monster of Magnitude. If I can get the flock situation sorted in time by tomorrow (it takes forever to dry in winter!)