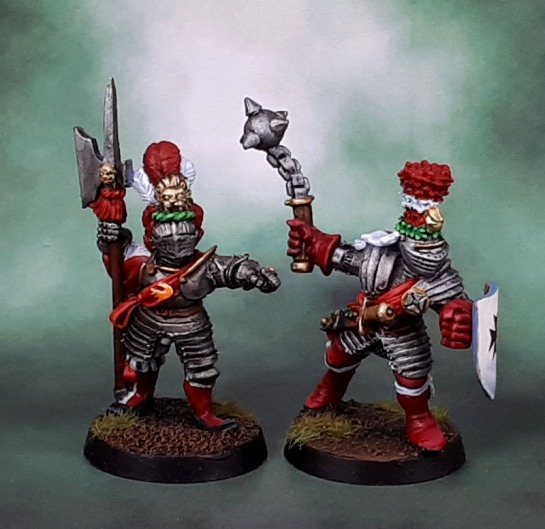 More Reiksgard Foot Knights today. I couldn’t find refernces to either of these two in the catalogues up to 2000, and due to the slight difference in stature and style between the two of them I suspect that they were released as part of different waves, or if the same wave, two different sculptors. Either way, these two are different enough from my other Reiksgard models that I decided that they could be a pair of Sarjeants as my numbers of painted Reiksgard slowly increase.

– edit: Thanks to Fredrik for letting me know that the Knight with the Morningstar is from Marauder Miniatures’ range of MM65 Reiksgard Knights, sculpted by Aly and Trish Morrison (Carden), released in 1993. The Halberd-armed Knight is “Hero with Halberd 2” from the Empire Command Groups, circa 1992). Both models quite a bit older than I expected, though I wasn’t especially interested in Empire back in those days as I was more into the fantastical and sci-fi stuff, so it does make sense that I’d have glossed over them. 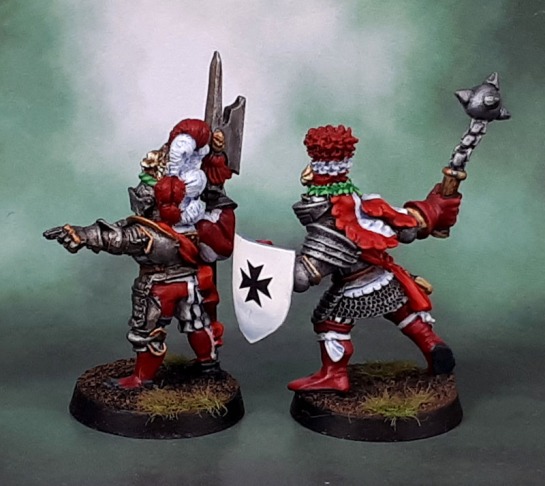 These were actually painted up early last month (June) but I forgot to photograph them until the other day, as they were sitting around with the other painted Reiksgard, and I just assumed I’d already posted them. That was until I posted the Sigmarite Warrior Priest the other day and was looking for the post with these two in it to refer to, as the model with Morningstar and Shield was the one I’d been proxying as my Cleric through the D&D Boardgame campaign until the WP was completed. And, well, I couldn’t find this post, or the photos, since neither has been created yet! 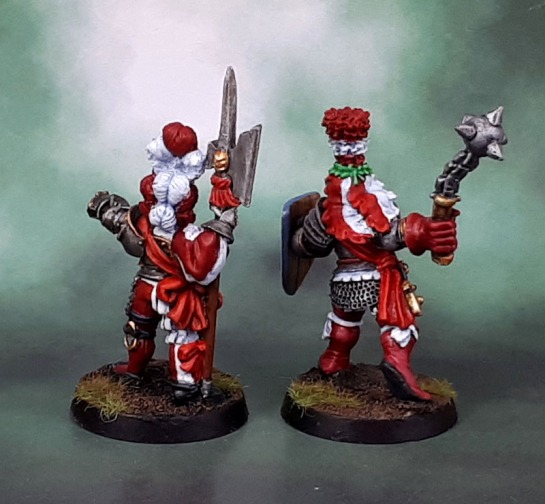 Paint-wise, there’s nothing amazingly revelatory going on here. I did use a variety of reds in order to try to define the different textures of cloth, feather and leather. A touch of green to contrast as a spot colour on the two of them.

And finally a group shot of them alongside their charges. Since painting these, I even found a baggie with even more of these things inside. So I’ve now got another 5 Reiksgard – stripped, based and sprayed, ready for a fast paintjob in the next Tray. Once I finish that, I’ll fish out another half-dozen or so…