So here’s an Illegal Model. I expect that the Games Workshop Staatssicherheitsdienst will be around presently to assist me with my re-education. More specifically, we have a Space Marine Librarian with Lightning Claws and a Jump Pack. A simple kitbash by my good self from the 3rd edition 40k era, when such things were ferpectly legal. Of course, as I’ve already blogged, none of my Mentor Legion of the day (my 3e New Edition, New Army) actually got completed due to a horrible experience with custom decals. Since discovering the wonders of 3D printing for Chapter Icons and a local source of pretty good printable decal paper that plays well with my Laserjet, I’m on the Custom Decal Train and I can finally finish off some of these old projects. 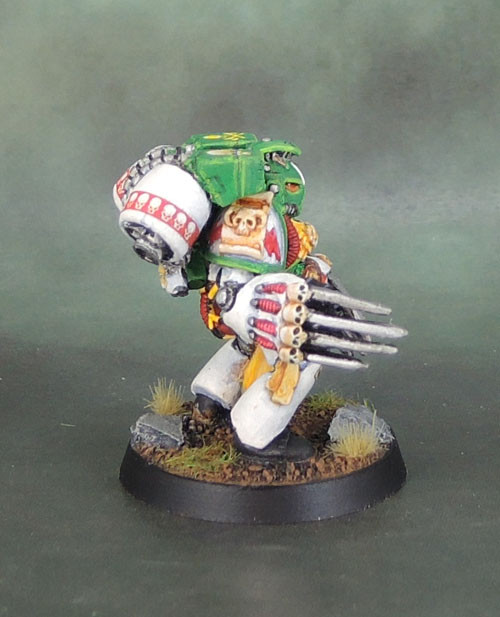 This Space Marine Librarian is known as Scipio Aemillianus (I was saving Africanus for the Captain), and as an Assault Librarian led my Mentor Legion force in their batttles during 3rd edition. Usually attached to one of the two 7-man Assault Squads, he regularly wreaked a furious vengeance on The Emperor’s foes.

Another kitbash/conversion from the all-metal days, his base is one of the metal Librarians (Power Axe, I think) with metal Lightning Claw arms from a Terminator grafted on, as well as the metal Jump Pack. The skull-rings on his Jump Pack were an interesting decal I found on an old Epic sheet, as is the skull and crossed axes on one of the vents. The Librarian symbols on his tabard are freehanded, as is the skull on his other vent.

I had to use a smaller Mentor decal than I would have liked on his shoulder, since I had the scroll there, and didn’t want to “cut off” the beak. I noticed the ding on the paint on his left greave and have since fixed that up. If I were painting the figure from scratch today, I’d have had less red on him and probably replaced some of it with silvered and copper metallics, but again, I’m trying to finish figures that I’m otherwise happy with. Maybe I’ll go back, but not anytime too soon. He’s a force leader, so he’s allowed to be a little more blingy.

Here’s a 2-shot of the pair of Characters so far completed for this army, and Scipio Aemillianus here is the last of my “Neglected February” models to share. I’ll do a personal round-up tomorrow, and then the day after, I’ll do one including all the people who have participated in the challenge.

So far (in my draft post) I’ve got Krautscientist, Alex, Justneedsvarnish, Mikeland82, Wargamer Eric, Ann, Steinberg Shed Space, Argentbadger and Back to the Hammer. If I’ve missed you, please add a comment below with a link to your Neglected model post so I can be sure to get everyone in. Because I feel like I’ve missed a person or two, despite combing through my reader and notifications…