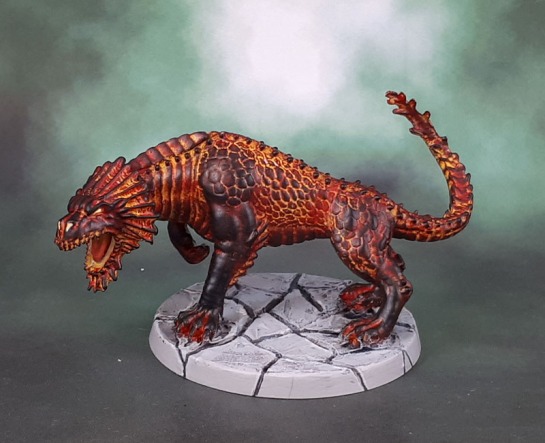 Next up we have the Bad Dog from Wrath of Ashardalon – the Rage Drake. Because apparently it’s not a canid of any kind (even a magical one), or even a duck or goose, but a form of Dragonkin. Well, alrighty then. The model’s base was as warped as warped a base as I ever did see, and even immersing it in hot water, then cold to do a reset didn’t work, as it then re-reset to the warped horrible state that it arrived in. So I found a 50mm round base and cut it off its integral base, glued it down, and then a little roughly added some acrylic paste and scored in those dungeony flagstones. 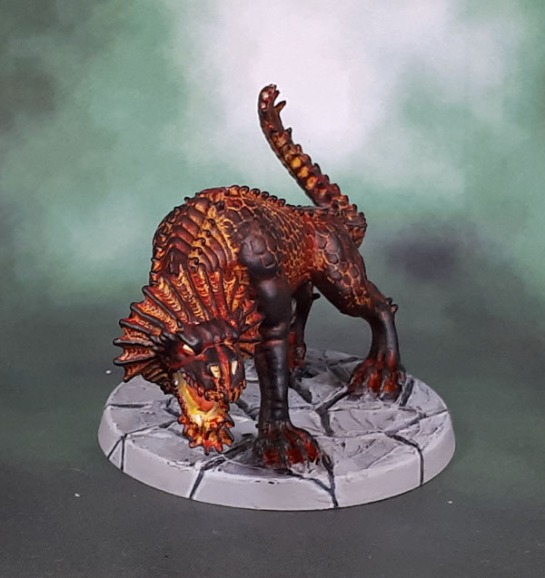 I then primed it white and browsed the internets to see what the fuck a Rage Drake is, and what it’s supposed to look like. Most renditions were in the red-to-dark-red range and looked pretty much how you might expect. Not bad by any means, and there are some very nicely painted examples out there. The one that resonated with me though, was one painted in much the same way as I ended up painting mine, with the scales in the skin repurposed to give a lava-through cracked earth (skin) look. Doing something like this would both make the Rage Drake look much mroe defined from Ashardalon (a Red Dragon) and also serve as a bit of practice for that Citadel LotR Balrog that I need to paint eventually.

It’s a decent model, given the context of it being from an 8-year-old boardgame. certainly more than a few ranks higher than some of the shit I’ve painted from the much more recent Shadows of Brimstone sets in the past few years – but given even this, it’s not a model that compared well with the stuff produced by Citadel, Reaper, Mantic’s newer stuff, or any number of other manufacturers. Instead of looking at this as a drawback, I’ve recently changed my perspective on these D&D models. I’ve been painting them for and as what they actually are – they’re boardgame models from an older boardgame that are meant for the tabletop, not the display shelf. It doesn’t mean they can’t potentially look good, but it does mean the point is to get them from start to finish in a reasonably fast time and don’t sweat the small stuff.

With that in mind, the Grell I showed yesterday were started one afternoon and completed by the following evening. This Rage Drake was started one evening and completed by the following afternoon. Some of the scales were badly defined and kinda messed up the lava look. Check out the front left shoulder on it and you can see it. Because of the base, the flagstones on this one are a bit deeper and stand out more. Here’s the thing – neither of those details are things anyone but myself is going to care about, and I could spend a bunch of time tweaking those small details, or I could just finish the figure and move onto the next one. Spend that extra time and energy working on a tiny freehand tattoo on a better model. Or playing a game. Or whatever. If a board game model falls somewhere within the first three of the below categories, then it’s good enough to call done and move onto the next thing:

I think I achieved that much!

oh, and on that very topic – I can see I forgot the wash on his base to tone it down and tie it in with the other models in my D&D Dungeons. I’ll do that tonight or tomorrow, as it’s easy and not nitpicky in the way I just described. This thing is also probably/possibly large enough to figure in as another submission for Ann’s Miniatures of Magnitude Challenge for May & June. I’ll get a scale shot in later, probably alongside Ashardalon once I finish him!